Watch Charlton vs Hull live on Sky Sports Football from 7pm on Friday night; Kick-off is at 7.45pm.

There might have been a change in management at Hull City over the summer, but one thing - no doubt the most important for Tigers fans - has remained constant: The exceptional form of Jarrod Bowen.

Since his breakout under Leonid Slutsky - and later Nigel Adkins - during the 2017/18 campaign, the numbers posted by the 22-year-old have been extremely hard to ignore. His first 14-goal haul was followed up by 22 last term, meaning Premier League interest was a formality.

Murmurs of Tottenham's interest lingered during the early part of 2019, while recent reports suggest Norwich and Newcastle are the latest suitors plotting to swoop when the January transfer window opens in a few weeks' time.

But during an exclusive interview with Sky Sports, Bowen moved quickly to reiterate his commitment to the club who signed him after the collapse of former club Hereford five years ago.

"Like I've always said, I'm with Hull no matter what the interest," he said.

"I think the interest just comes when you are doing well on the pitch, so I've just got to put it to the back of my mind, do what I'm good at on the pitch and everything else will take care of itself, I'm sure."

Under Grant McCann's stewardship, that's exactly what is happening.

With Hull sat 14th in the Sky Bet Championship table ahead of Friday's clash with Charlton - a game which is live on Sky Sports Football - there is certainly a feeling they are yet to meet expectations, yet Bowen sits second on the list of the division's top scorers with 14, second only to Fulham's Aleksandar Mitrovic.

It is a figure that looks even better when one considers the fact a large proportion of those goals have been scored from a berth on the right wing. Two came in seven second-half minutes recently against Stoke, turning the game in the Tigers' favour. He is a match-winner but, being a humble character, there is no chance he is taking all the credit.

"I just want to score goals and, thankfully, against Stoke it was two to win us the game, but I think it comes from a collective team point of view," Bowen added.

"We've got quality all around the pitch, so thankfully the ball is just dropping for me at the minute and I'm sticking it away, which is always pleasing, especially if we can win as well. That tops it all off.

"I'm still doing the same things off the pitch, still preparing myself the same as I was last year. Sometimes you just hit that form and everything goes in; you get chances and you're more ruthless with them, more clinical. I've got 15 goals [in all competitions] and now it's just trying to better last year if I can - that's certainly the aim."

Some comparison can be drawn between the versatility of Bowen across the frontline and that of Brentford's Ollie Watkins, who has scored 13 goals since becoming the club's first-choice striker despite having been deployed on the wing for the last two seasons in west London.

But does the Hull forward envisage a similar evolution?

"Maybe not a No 9, as an out-and-out striker, maybe just a 10 off a striker. I think that would be perfect for me, between the lines," he said.

"But even as a nine - I've done it a few times this season - I've felt comfortable. I think off the wing and just behind the striker are probably the two go-to positions, so to speak. I'm comfortable with playing both.

"The gaffer has tried me in three different positions now and I feel like I've done well in each of them, so it gives him another option. If we have injuries or suspensions, he knows he can trust me in those positions. For me, it's good to have that versatility of playing in different positions. Wherever I'm playing, I try to change my game."

Four games in 16 days now lie ahead for Hull and Bowen has identified the festive period as a time to climb the table and challenge for a place in the top six.

"I think it could have been better," he said. "It's a bit frustrating, where we know we could be with the games where we've dropped points, but we are still four or five points off the top six. It's pretty non-stop and relentless. There are a lot of games to pick up points, score some goals. It's an exciting time, so I'm looking forward to all the games we've got. 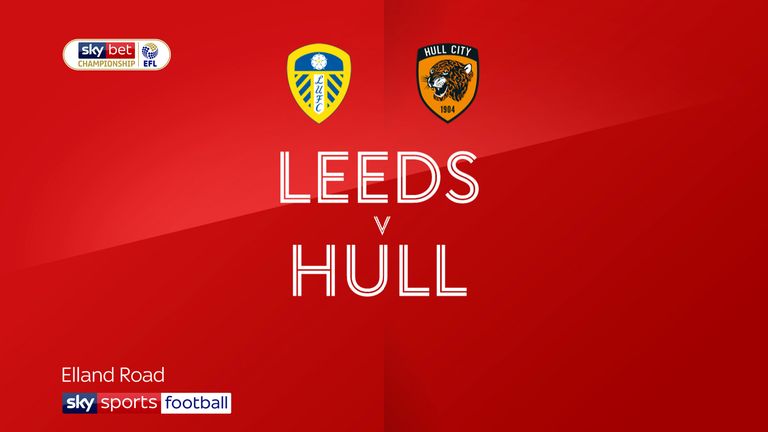 Highlights of the Sky Bet Championship match between Leeds and Hull

"The top two have got a gap, there's no denying that, but it doesn't mean no one can chase them. The four places for the play-offs are so open. The Championship is a hard league to get out of, but last year we went on a six-game winning run and picked up a lot of points over the Christmas period.

"All you need in this league is to get points on the board. We want to cement ourselves in the top six and I think we're more than capable of doing it."