Marcelo Bielsa exclusive: Leeds manager sticking to his principles in the face of adversity

In an exclusive interview with Sky Sports, Leeds manager Marcelo Bielsa says he is not about to rip up the rulebook after his side's winless start; watch Newcastle vs Leeds live on Sky Sports Premier League from 7pm on Friday; kick-off 8pm

Marcelo Bielsa is standing in an elevator.

Directly opposite him is a star-struck Leeds supporter dressed in a replica shirt as they patiently wait in silence for the door to ping on the first floor.

His acknowledgement of the frozen fan is typically polite but no words are exchanged as he makes a swift exit, his aura kept intact.

"I don't recall the meeting," he tells Sky Sports with a bemused look when asked about the episode that has gone viral on social media. "I haven't seen the video but maybe it happened.

"When we lose, I have too much embarrassment to go out. I prefer to stay at home. So I couldn't possibly say if it was me," he adds with a smile.

Known for embracing his local surroundings, there are various murals in Leeds bearing Bielsa's recognisable face as a sign of gratitude for the job he continues to do at Elland Road.

With two points from their opening four games, this has been the club's worst start to a league campaign since the 1985/86 season, and yet there is no sense of panic.

It is the first time they have failed to win any of their opening four games in the top flight since 1958 under Bill Lambton, but as the club prepare to visit Newcastle on Friday Night Football, the man who holds the keys to those fortunes is not about to change his methods in order to reach that end.

"We have constructed a club where you can imagine this possibility being achieved," Bielsa says when Radrizzani's objectives are put to him.

"If I thought another way of playing would improve the team, I wouldn't have any doubts in doing it.

"The style of the team is always in conjunction with what's convenient and then it's a case of being able to execute those plans.

"There's only one great difference in style and that concerns what the goalkeeper does with the ball at the start of attacks. There are teams who put the ball in play, and others who opt to go long. 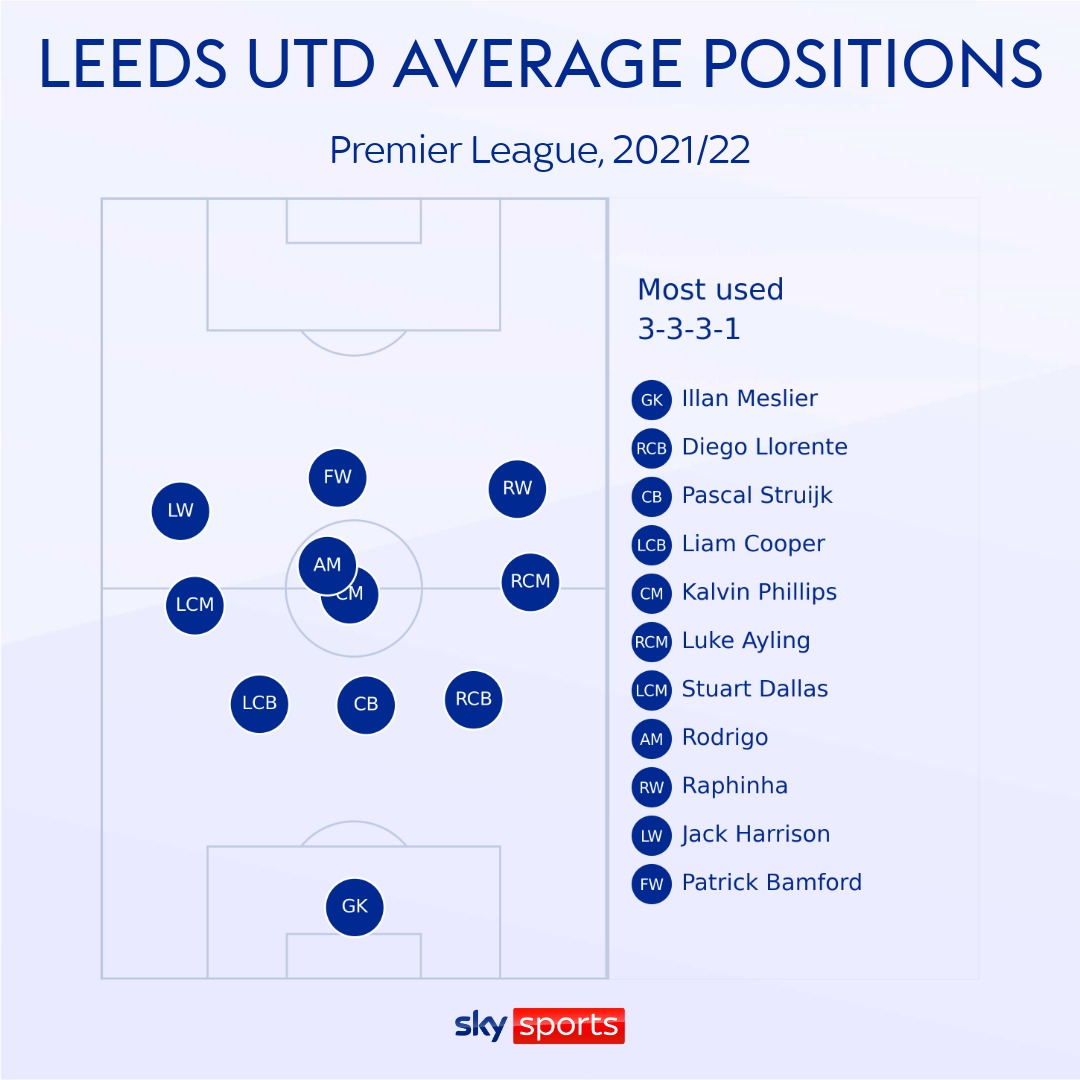 "It's a legitimate route to go direct as it reduces the potential for errors but it also reduces the beauty of the game and the possibilities to attack. Both approaches are legitimate but what I intend to do is improve what we do.

"What some have proposed is that we change our way of playing. To change it would be to forget the praise we have received during the three previous seasons."

Bielsa's followers are ready to accept the highs and lows which come with seeking to re-establish Leeds within one of the world's most competitive divisions.

As Liverpool saw out their victory at Elland Road, those home supporters who remained inside the ground sang their manager's name.

The club's fall and rise which saw them return to the Premier League after 16 seasons away - including three years in League One - is well-documented, but Bielsa is not about to rip up the rulebook after his side's winless start.

"When you don't achieve immediate results, there are those who don't protect the essence," he says. 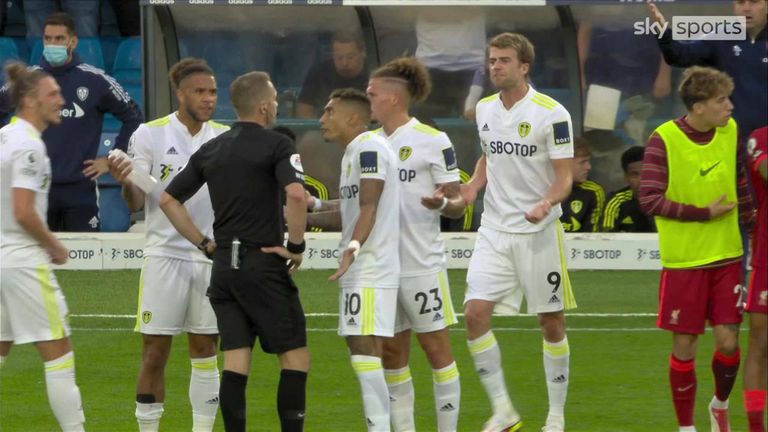 Leeds head coach Marcelo Bielsa has asked for justification on why Pascal Struijk's red card for his challenge on Harvey Elliott was not overturned, despite the injured Liverpool midfielder claiming the incident did not merit a red

"They throw it away, and substitute it with something completely different. We've only had four rounds of matches, so it's a bit premature to draw conclusions."

Judging by where Bielsa has invested most of his budget during his tenure, it is clear where he looks to hurt opponents.

Jack Harrison turned his loan into a permanent deal for £11m during the summer, while the most high-profile arrival saw Daniel James join from Manchester United for £25m.

Adding those two pieces of business to the £17m signing of Raphinha and £15m spent on Helder Costa (now on loan at Valencia) and it is clear that Bielsa values pace as a crucial component of his playing style.

The numbers back this up, with Raphinha (128) and Patrick Bamford (92) ranking first and second respectively in the league for the total number of sprints this season. James ranked third for number of sprints per 90 minutes in 2020/21 (29.2).

The Wales international could be set to make his first start at St James' Park, but Bielsa stopped short of revealing his plans to incorporate him alongside Harrison and Raphinha in the same starting XI.

"They're all wingers but it's very difficult to imagine a season where we would only use two players in the two positions," he continues. "Having at the very least three players who can play wide is important and all three will have their opportunities.

"When it comes to selecting your offensive players it is with a view to eliminating the strengths of your rivals. It is then much easier to finish off your own attacks.

"You can do this through passing phases but this is much harder to achieve because it depends on coordination and combinations within the team.

"To beat teams through just one individual action is a rarer commodity. There are many players who err on the side of caution in possession but fewer who are willing to take risks.

"It is hard to find players who can do this, creating an imbalance in the opposition through solely their dribbling actions.

"Raphinha is an example of someone who does this while both Harrison and James both like to mix it up. None of them necessarily have a distinctive feature but the focus is always on trying to unsettle the opposition."

The last time Leeds failed to win any of their first five league games was in the 1946-47 season under Bill Hampson, and the side went on to finish bottom.

Having faced three of the Premier League's most in-form teams thus far, Bielsa's is right not to get carried away.

The home loss to Liverpool was just the third defeat the team have suffered in their previous 15 Premier League games, but memories of a strong end to last season which propelled them to a ninth-place finish are fading.

Defensive concerns have resurfaced with only Newcastle (12) having conceded more than their 11 shipped after four games. The same applies to expected goals against with only Steve Bruce's side having given away better chances to score.

Arresting the slide has been made all the more problematic with three of Leeds' four senior centre-backs missing for the Newcastle clash; Bielsa confirmed the absence of injured duo Robin Koch and Diego Llorente along with Pascal Struijk through suspension.

Ahead of the trip to Tyneside, the Argentinian revealed the club's U23 captain Charlie Cresswell could be "part of the solution", but after Junior Firpo's baptism of fire up against Mohamed Salah last weekend, is there a game plan to neutralise the threat of Allan Saint-Maximin?

"Listen, every team in the Premier League has prominent forwards and Saint-Maximin is one of those," Bielsa admits. "He is someone who isn't confined to just one position as he is capable of occupying a wide berth and can also operate more centrally.

"It is the challenge of the entire team and our entire defensive structure to limit his impact, not just the job of one individual."

For as long as Leeds' wait for a first league win of the new season continues, there will be lingering doubts over whether Bielsa should compromise on his attractive style.

We naturally return to the subject, as I ask him to expand on the point made about goalkeepers being a defining aspect of contrasting football philosophies.

"My motive is always to seek ways of winning. The position of those who want to see a different way of playing is understandable as it's human nature to not have tolerance towards adversity.

"The demand for us to stop being what we are increases when we stop having results.

"There's another, more loyal way of looking at it whereby the adversity which comes in the process of constructing a team in your image is tolerated.

"When something is broken or suffers, there are two options: you throw it away and change it for another, or you look after it and try to put it back together. It's the same in life."

Bielsa is sticking to his principles. A first win of the league season on Friday night would alleviate any tension. Who knows, he might even venture out.

Newcastle vs Leeds is live on Sky Sports Premier League from 7pm on Friday; kick-off 8pm. Sky Sports customers can watch in-game clips in the live match blog on the Sky Sports website and app.