Watch Brentford vs Swansea live on Sky Sports Football from 7pm on Wednesday; Kick off 7.45pm

Taking advantage of the drinks break that has become commonplace since the football season restarted at the end of June, the Dane, encircled by his players, put on an animated display as his side trailed 1-0 with 20 minutes to play - with the help of a magnetic tactics board.

The 116-year-old stadium set for a muted farewell

Brentford's Griffin Park home will host its final ever fixture on Wednesday night, when the Bees take on Swansea in the Championship play-off semi-final second leg.

In the short amount of allotted time, he furiously re-arranged the red and yellow dots representing the players and whatever impassioned cry he delivered seemed to work, as goals from Said Benrahma and Ethan Pinnock turned the game on its head and earned the west London side their sixth league win in succession.

"Of course that was crucial - if I hadn't done that, we wouldn't have taken the three points!" he explained, with a grin, in an exclusive interview with Sky Sports. "I just put up my Harry Potter wand and said 'hocus pocus' and we got three points. That was it!"

It was a light-hearted comment made in jest, but if history is anything to go by, the 46-year-old will need some form of magic on his side ahead of Brentford's play-off semi-final second leg against Swansea. Since reaching the Third Division lottery in 1990/91, the Bees have embarked on eight unsuccessful campaigns, finishing as runners-up on three occasions.

They enter Wednesday's crunch clash a goal behind on aggregate, after Andre Ayew's stunner earned Steve Cooper's men a 1-0 win at the Liberty Stadium on Sunday night.

In this greatly condensed end to, arguably, the most unpredictable division in world football, the outlook has changed rapidly for Brentford, who, after eight straight wins, spurned two late, gilt-edged opportunities to bypass Slaven Bilic's stuttering West Brom and gain automatic promotion to the Premier League.

The hurt on Frank's face was clear after the final day defeat to Barnsley, the usually jovial nature masked by the frustration of passing up a second opportunity to reach the promised land in a matter of days. "Things happen that sometimes you can't explain. Sometimes there is not a reason why," he conceded in his post-match press conference. "We can't sit down and cry too long because that will never help anything."

In south Wales, Frank's men heeded his words and put on an improved and encouraging display, but were dealt a significant blow when referee Keith Stroud showed a controversial straight red card to left-back Rico Henry after a tackle on Connor Roberts.

Just over 15 minutes later they conceded what proved to be the winner, which meant the narrow defeat was the tenth occasion this term in which the west London side have lost 1-0. In 14 league and play-off defeats, they have been defeated by more than one goal on only one occasion.

The margins are fine and the potential missed rewards enormous, yet Frank chooses not to dwell on what might have been.

"With one of the best defences and attacks in the league, you think maybe we could have scored those goals in different games and that maybe would have made a bigger difference. Honestly I don't look too much into that," he said.

"In general, I think we've had a good season. We've been in a very good place and played some top football on our day so we've kept building on that performance level.

"I need to praise my performance staff, medical staff and the players for they way they handled the coronavirus break, in terms of both having the programmes and having the passion and dedication that everybody put into it. After we came back, they were just bang on and I think we nailed that new mini pre-season, so they were in a fantastic physical place.

"I know that if you look at all the stats, expected goals and all that, we should have been higher and also if you look at the performances we could've been higher. But this is football. It's not only about stats and numbers. We know the margins are very small so there could have been times where we needed that margin earlier but again, we are in a good place, so we just need to attack." 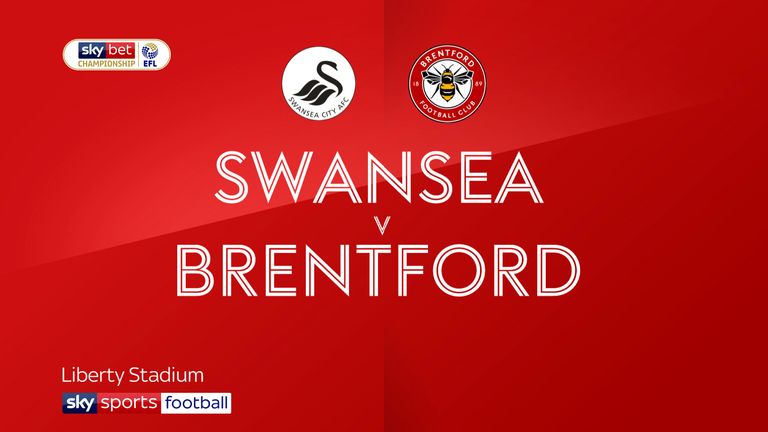 Of course, the dangling of the carrot that is promotion - particularly at such a late stage - raises the expectation level of fans. But then again, whatever happens, a play-off campaign is more than many had hoped for at the start of the season, when the sale of striker Neal Maupay to Brighton acted as the precursor to four defeats in the first seven games.

But the development of Ollie Watkins into "more or less a complete No 9" and a defensive turnaround so great the tally of 38 goals conceded is their second-lowest in the century they've been a Football League club, means this campaign is just two games away from being one of the greatest in their history.

While Wednesday's game is crucial to the outcome of both Brentford and Swansea's seasons, it's also hugely poignant as the final ever fixture to be played at Brentford's Griffin Park home. Frank admits he will be doing his utmost to give the 116-year-old stadium the send off it deserves.

"When you go into the training ground every day and you feel that energy the first second you are in the ground, that's just a top feeling. In football, it's not only black and white - there are a lot of nuances. But the place we are in and the culture we have built means it's just a pleasure to go to work every day.

"We can only focus on the next game and put everything into that game, prepare well and then look after that game. And I've said the whole season that we are doing our very, very best to make this a magical season at Griffin Park. To make sure we leave with class."