Newport penalty debate: Should VAR have been used in play-off finals? David Prutton, Danny Cowley and Ryan Lowe discuss whether VAR should have been in use during the League Two play-off final after Newport County boss Michael Flynn felt his side were on the receiving end of some poor decisions.

Newport boss Michael Flynn called into question the EFL's use of VAR after the Exiles were denied a penalty in their play-off final defeat to Tranmere.

With the score at 0-0 heading into the final five minutes of the initial 90 at Wembley on Saturday, County's Jamille Matt controlled a long throw into the penalty area and struck a pass in the direction of captain Mark O'Brien.

The skipper - who was later sent off for a second bookable offence - was a yard offside when he attempted to intercept the pass, while Matt was clattered by Manny Monthe. Referee Ross Joyce blew his whistle, though awarded the offside, rather than the foul - a decision that saw him surrounded by incensed Newport players.

According to the laws of the game, O'Brien would not become active until he touched the ball, as Matt could still get on the end of the pass. Therefore, a penalty should have been awarded if a foul was committed; the offside decision would be irrelevant. The incident sparked debate among pundits and managers alike after the final whistle, particularly given the fact that, in April, the EFL ruled out the introduction of VAR for the play-off finals.

Speaking to Sky Sports, Newport boss Michael Flynn said: "I'm devastated for the players - they've given me their all. I want to congratulate Tranmere, they've had a very good season. But, it's a common occurrence where big errors are happening. 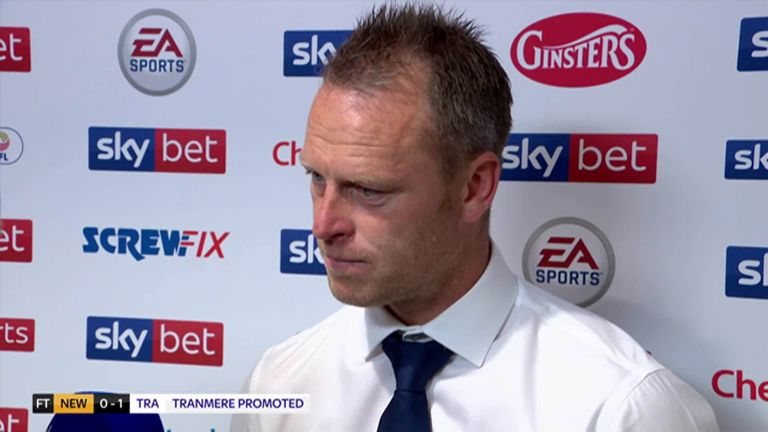 Newport County boss Michael Flynn felt his side were denied a clear penalty as they suffered a 1-0 defeat to Tranmere in the League Two play-off final.

"This is a play-off final - you need better referees. They want improvements in football so why isn't VAR being used? They've got the facilities. It's a stonewall penalty if I've ever seen one. It's not good enough. That would have been game over."

Bury boss Ryan Lowe and Lincoln boss Danny Cowley - guests on Sky Sports Football had mixed opinions. Lowe said: "I agree. VAR should come in for the finals. We've got goal-line technology so why not VAR - it's a big, big decision".

Cowley, meanwhile, argued: "I think the referee has gone with the easy decision rather than the right decision. Once the flag goes up it's easy to give offside. It is hard for the referees."