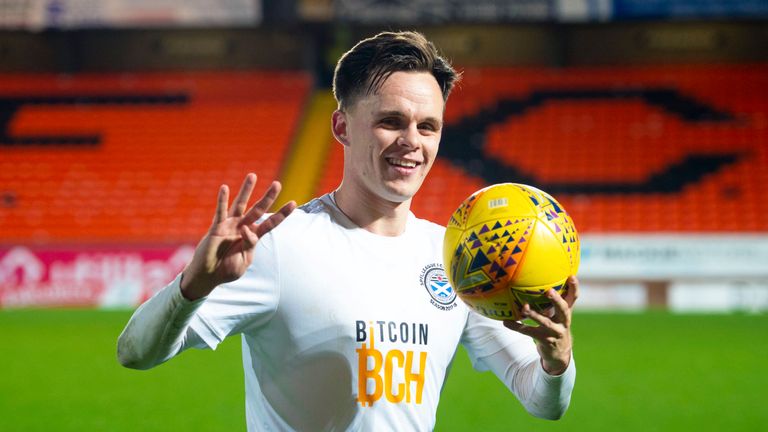 Can Lawrence Shankland fire Ayr United to back-to-back promotions and a spot in Scotland’s top flight?

At the start of the season, Partick Thistle, Dundee United and Ross County were among the favourites for the Scottish Championship title but Shankland's devastating form has propelled newly-promoted Ayr to the top of the table and very much into the reckoning.

The 23-year-old has reportedly attracted interest from a number of clubs in recent months, including Swansea, and it is easy to see why.

Shankland has scored 16 goals in 15 Championship games, including four in a recent 5-0 win away at a Dundee United side which had been rejuvenated by the appointment of former Hearts and MK Dons boss Robbie Neilson.

He has scored every 83.06 minutes in the league this season and, indeed, no one across the top two divisions in Scotland has been involved in more goals this term than Shankland, who also has three assists to his name.

In all, he has scored 26 goals in 23 games in all competitions so far this campaign. The truth is he has simply picked up where he left off last season.

Shankland initially signed a short-term deal with then-League One Ayr in September 2017 after being released by Aberdeen.

But after hitting 12 goals in 11 games he extended his contract until the end of the season, eventually scoring 26 times to help Ayr win the league on the final day and seal promotion to the Championship.

He finished the season as top goalscorer in the division, scoring a goal every 98.35 minutes, as well as contributing 10 assists and was named the PFA Scotland Players' Player of the Year for League One.

Shankland moved to Somerset Park after a disappointing stint with Aberdeen but he has not looked back since his switch to Ayrshire.

He started his career at Queen's Park, where he played alongside the now-Liverpool and Scotland left-back Andrew Robertson, with his 14 goals catching the eye of Aberdeen.

He endured a disappointing spell at Pittodrie, however, which saw him fail to score in 17 appearances, 15 of which came from the bench, while he was also sent out on loan to Dunfermline, St Mirren and Greenock Morton.

Shankland has put his frustrating Dons spell behind him and found a new lease of life under Ayr boss Ian McCall, who will be desperate to keep the prolific finisher past the January transfer window.

The Glaswegian is out of contract at the end of the season and, with so much interest in his services elsewhere, it may be that he ends up leaving the club in the summer if McCall can hold on to him next month.

However, he could potentially do so having scored the goals to earn Ayr two straight promotions and a place in Scotland's top flight for the first time since 1978.