Which manager showed little regard for sports science? Which boss turned the club's fortunes around overnight? Kris Boyd runs through the three best footballing minds he worked under 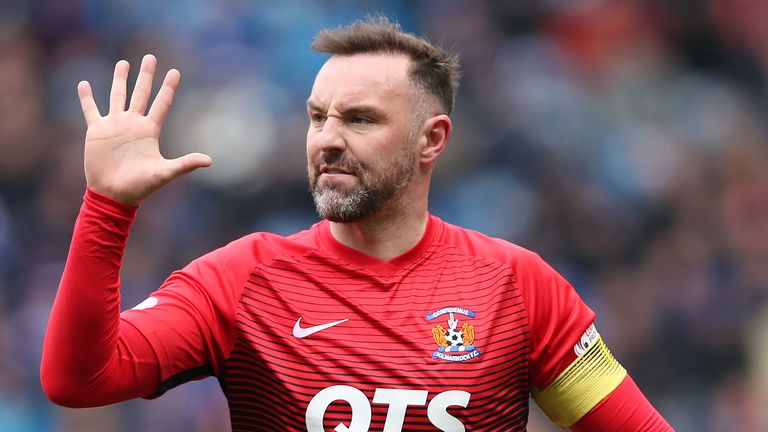 Sky Sports pundits Kris Boyd and Andy Walker have both been recalling inspirational managers during their respective playing careers.

Boyd won the Scottish Premiership title, the Scottish Cup and Scottish League Cup on each of two occasions as a player with Rangers, while he was also the leading goalscorer in the top-flight in five different seasons.

Walker made over 150 league appearances for Celtic across two spells, winning the double with the Bhoys during the 1987/88 season - the club's centenary year.

The pair have reflected on their time in the game and picked out managers who have contributed immensely to their development...

'Walter was the best to work under'

Andy Walker: "What for you Kris makes a good manager, and who for you has stood out?"

Kris Boyd: "The most important thing for me is the man-management. I've worked under a number of coaches who are very good on the field, but maybe not so good at other things. If you've got that man-management style and you can work and speak with the players, I always think it'll take you that little bit further. Those who relate to you will invariably work for you.

"There are very good coaches who can be challenged on things and are asked things they aren't sure about, or don't have the man-management style. It can be very difficult.

"For me, Walter Smith was the best to work under. From the very first moment you come across him, the stature is there. I worked with him at Scotland, and I knew right away there was a more relaxed feeling. The good thing for the players was that if he was relaxed, then we were relaxed. We won the Kirin Cup in the summer of 2006, and it helped us heading into the Euro 2008 qualifying campaign.

"By the time I worked with Walter, he wasn't really one for being out on the training ground. He left all of that for the likes of Ally McCoist and Ian Durrant. But the thing that was clear was that when he really had to do it, like for the Celtic games and the Scotland games, that's when he came into his own.

"He was able to communicate with players and if you asked a question, he knew exactly what he was talking about. There's a lot of good managers out there that can put sessions on but have failed to deliver or give you the answers."

Walker: "When Rangers were dominating in the 90s, Graeme Souness placed a lot of faith in Walter Smith.

"One of the best things Souness did as a manager was bring in Smith as a coach. Having done all that work with Jim McLean [as Dundee United assistant] and Alex Ferguson at the World Cup [with Scotland], he worked under Souness, who was just finishing his playing career and was naive in the management game... everyone looked up to him in terms of his playing career.

"Walter Smith didn't have a golden playing career, but he certainly knew how to get the best out of players."

"Walter realised it was he and not McCoist who had to change, because when you score that number of goals, you can't tell goalscorers where to go. They'll find that space. Walter was able to adapt as a manager to how his players worked."

Walker: "I think the biggest mistake the SFA made was when they were looking for a new manager and Walter Smith made it known to pretty much everyone that he was ready to come back for his second spell with the national team. That was a big mistake."

'Jim had this art of speaking to people'

Walker: "Who else did you really enjoy working under?"

Boyd: "Bobby Williamson gave me my Kilmarnock debut, but a large chunk of my time there was spent working under Jim Jefferies. Working with Jim was great grounding for me. He had an old school way, but it was the best way to get the job done. You had to respect everybody, and he had an unbelievable partnership with [assistant manager] Billy Brown.

"Billy would take a lot of the training, but you knew who the manager was. Jim had this art of speaking to people, and you would run through brick walls for him. He would have a way of getting the best out of players."

Walker: "Jim was always one for giving out praise and I think players need to hear that, especially when you're younger. Was he the type of guy who gave you a lot of praise?"

Boyd: "Jim and Walter were both managers who weren't afraid to come into the dressing room after a game and to absolutely ridicule you. In the press, they would come out and defend you and say you'd be back stronger next week. That would allow you as a player to just focus on performing in training to go again in the next game without the added pressure of the press.

"They didn't hold any grudges. At Kilmarnock at the start under Jim, I was at a crossroads. I was this tall, lanky striker. I had a bit of pace when I was younger, but I needed to adapt my game. Other things had to come into my game, and a lot of what Jim worked was based around the striker.

"He focused on making us a more physical target for our defenders and midfielders to hit. He worked a lot on that, and it really helped me in the long run."

Walker: "Working for a side like Kilmarnock compared to Rangers at the time, you don't have the money to spend to scour the market. You need to have an eye for a player or faith in those coming through a youth set-up, and Jim had that...

Boyd: "A hundred per cent, both he and Billy Brown. For me as a youngster coming through, the grounding was unbelievable. I look back at my career now, and Walter was an intimidating character, but I'd already experienced all of that with Jim as a boy.

"The two of them were brilliant for me in terms of toughening me up. It was exactly what we needed at the time at Kilmarnock, and I feel a lot of the success the side has had since is down to the changes made a long time ago now under Jim Jefferies.

"I remember when we first introduced a lot of the sports science at Kilmarnock. It was a big thing at the time, with the use of the heart-rate monitors. There was one time where we'd finished training and we'd all been in the red zone for a few days. I remember Jim saying to the physio that unless we were being physically sick, there was still plenty of levels to go!

"That was just Jim and Billy... that's the one thing about a good manager - your eyes tell you everything. That was one thing those two had and it was something Walter Smith had. Your eyes told you everything."

Walker: "And your last choice has been alongside some of the great managers in the game during the early stage of his career..."

Boyd: "I owe a lot to Alex McLeish but I only really worked on the club scene with him for about six months, and the same applied to Gordon Strachan. But I have to go with Steve Clarke, because he transformed Kilmarnock overnight. It probably was a big gamble at the time he took.

"He backed his ability and who he was as a person. You only need to look at what happened in such a short period of time... he did really well at West Brom and Reading but then he found himself out of the game for a while.

"He needed to find a way back in and Kilmarnock was a match made in heaven. His family were Kilmarnock fans, but for him to achieve what he did in such a short period of time, it was unbelievable.

"I'll always remember on the first day him coming in and saying that the stadium would also be the training pitch as it was artificial. He told the players they could go if they didn't like it. The mindset was totally changed. I'd been part of a Kilmarnock side that had struggled, and it was well documented at the time that I was about to leave.

"But having done my coaching badges, I knew I'd have been stupid to have let the opportunity of working under Clarke go. He told me to work with him, even though I knew my knee was finished. I remember phoning him that night to tell him I wanted to work with him. He wanted to build the team around me to get the best out of me.

"All of a sudden, I went from being on the verge of retirement to going out onto the pitch feeling like King Kong, ready to take on the world again."

Listen to the podcast in full by clicking on the link above to find out Andy Walker's choices...