Rangers confirmed as Scottish Premiership champions after Celtic fail to win away to Dundee United on Sunday; Steven Gerrard's side beat St Mirren 3-0 at Ibrox on Saturday to remain unbeaten in the league this season

Rangers have won their 55th Scottish top-flight title after Celtic's 0-0 draw against Dundee United at Tannadice on Sunday officially ended their bid for 10-in-a-row.

Celtic needed to take maximum points from their trip to Dundee United after Rangers' 3-0 win over St Mirren on Saturday took them to the brink of securing their first Premiership title since 2011.

To compound matters for Celtic, a plane carrying a banner reading "Can you see us now?! #55titles", presumably arranged by Rangers supporters, flew over the stadium just minutes into the match. It means that Rangers' first league outing as this season's champions will be at Parkhead on March 21, live on Sky Sports.

Ryan Kent, Alfredo Morelos and Ianis Hagi scored against St Mirren as Rangers continued their unbeaten Premiership run against the only side to have managed to get the better of them at home and abroad this term, in a 3-2 League Cup win in December. 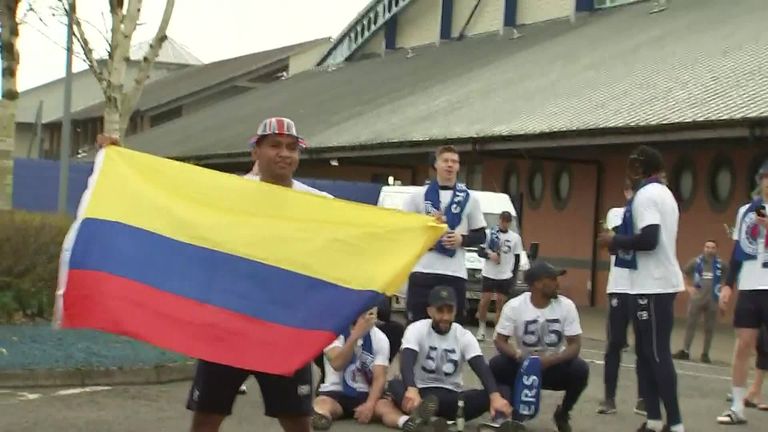 It is Steven Gerrard's first trophy as Rangers manager after taking over in Govan in the summer of 2018.

He and his players were met by thousands of Rangers supporters at Ibrox ahead of the game on Saturday as crowds gathered to let off flares and hang banners near the stadium, breaking lockdown restrictions. 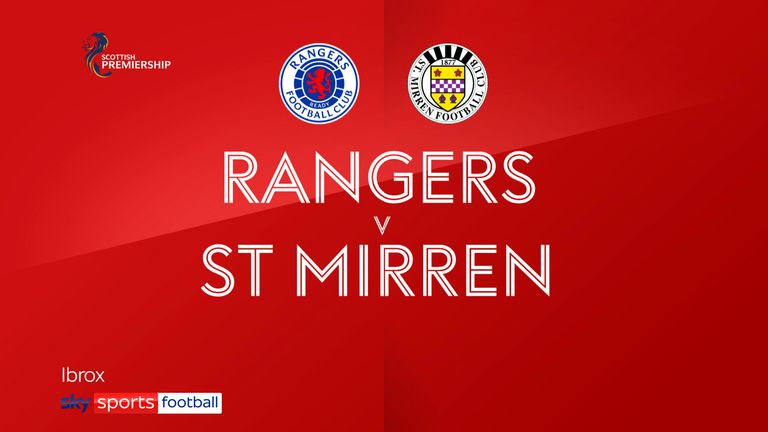 Highlights of the Scottish Premiership match between Rangers and St Mirren

She said on Twitter: "I congratulate Rangers on the title win & recognise what a moment this is for fans. But gathering in crowds just now risks lives, and could delay exit from lockdown for everyone else. If those gathering care at all about the safety of others & the country, they will go home."

Rangers will now travel to Czech Republic in midweek ahead of Thursday's Europa League last-16 first-leg match against Slavia Prague.

The Scottish Football Association announced last week that Scottish Cup fixtures are set to resume this season, with Rangers hosting Cove Rangers and Celtic welcoming Arbroath or Falkirk to Celtic Park on April 3. 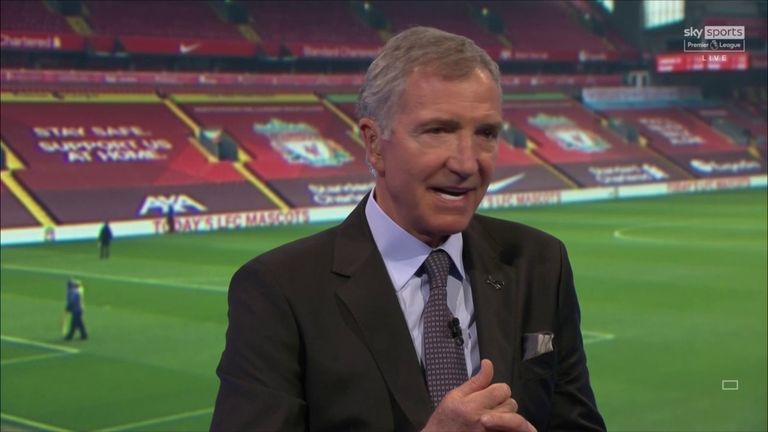 Sky Sports' Graeme Souness: "It's been a long time coming. Celtic have had a period of domination which has been uncomfortable for Rangers' supporters. They've been fantastic all season and they thoroughly deserve it. I just wish I was in Glasgow right now. There's part of me which wishes Celtic had won today so that Rangers could win it at Parkhead next week."

Former Rangers defender Terry Butcher: "[Gerrard] has won Champions Leagues, FA Cups, we've all seen some of the goals he's scored, but this will be one of his biggest and best achievements. "It's just a shame the Rangers fans were not able to be there in the stadium, he would have really experienced what we went through as players back in the day. It's no less sweet for him to receive this trophy, despite all the conditions.

"It's a huge achievement. For him, he'll remember this forever. He'll be remembered forever, this is one of the greatest things he'll ever do in football. As time goes on, he'll see that's the case. Well done Steven Gerrard, well done to his staff, well done Rangers Football Club."

Former Rangers manager Alex McLeish: "It just means absolutely the world to them [the fans]. You saw the reaction yesterday ever before the game at Ibrox, awaiting the team, awaiting Gerrard, because they knew something was in the air this weekend, and they've been rewarded with the title today. 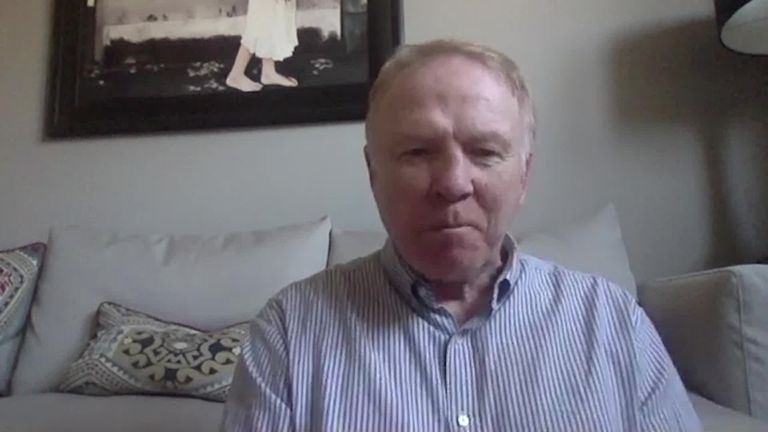 "I know they'd probably like to do it in style and win a game to secure the title, but they've thoroughly deserved it. You have no idea how much it means to these fans who have been deprived for 10 years.

"I was lucky to get a chance at Rangers as well, win a couple of titles. Getting number 50 was very memorable, 51 as well, then Walter came in and got a hat-trick, teeing it up for Stevie to get the 55th. They really are milestone achievements, phenomenal, brilliant for Gerrard's first job. It's just sensational for him."

Kennedy: We won't let someone else dominate 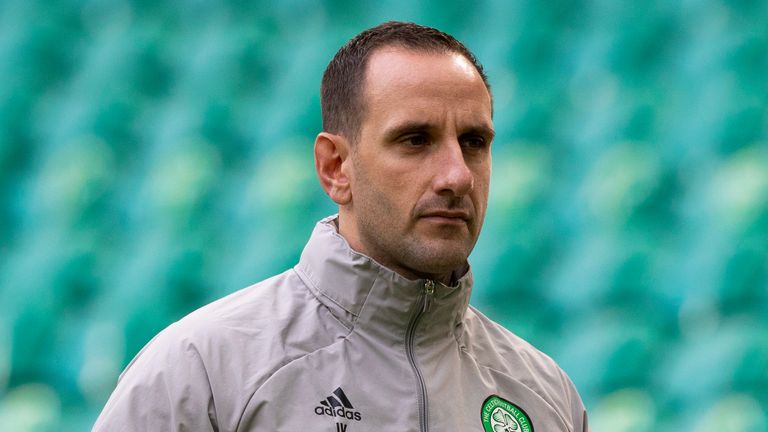 Celtic interim manager John Kennedy says Rangers deserve to win their 55th top-flight title but is keen to stop them from dominating Scottish football over the next few years.

Celtic interim manager John Kennedy says Rangers deserve to win their 55th top-flight title but is hungry to stop them from dominating Scottish football over the next few years.

"[We're] disappointed, the objective at the start of the season was to get to 10," Kennedy said. "That hasn't happened for a number of reasons, but ultimately Rangers have been better than us through the course of the season. Simple as that, they've deserved to win it this year, we just have to accept that and get on with it.

"We've been champions for so long, we've had so much success, not just in the league, but domestically in the cup competitions. It's about continuing that. At some point you have a blip, we've had that setback this season, we've not been good enough, we'll never shy away from that, but it's not about giving up, standing back and letting someone else dominate.

"In terms of recent times, we've still been the dominant team. This competition it hasn't happened, we want to get back on course as quickly as we can."

Who's won the most top-flight league titles?

Rangers won their 55th top-flight league title on Sunday, meaning they have won more league trophies than any other club in world football.

The Ibrox club were level alongside Northern Irish side Linfield, on 54 titles, before moving one clear of the team managed by former Rangers player David Healy. 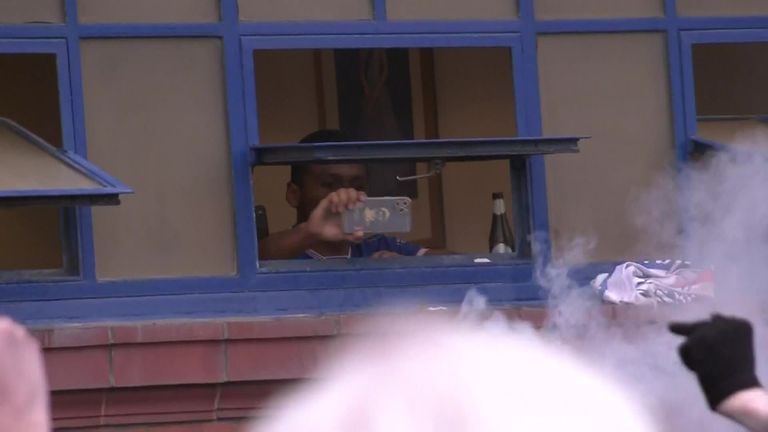 Linfield could draw level with Rangers if they win the Irish Premiership this season but Steven Gerrard's side are now four titles clear of rivals Celtic who have lifted the league trophy 51 times.

Rangers have now won 55 league titles, 60 domestic cups and one European Cup Winners' Cup meaning they've secured 116 major trophies, the most by any club in Scotland, with Celtic their nearest challengers on 111 trophies.

Rangers have ended Celtic's dominance in Scotland by claiming their first Scottish Premiership title since 2011, but who were the key players in Steven Gerrard's side's success?

We tasked former Rangers striker Kris Boyd with the job of picking out five key players from Gerrard's title-winning team, and it proved to be a tricky challenge.

"It's a difficult one because so many players have played a big part in what Rangers have achieved this season," Boyd told Sky Sports.

"The likes of Filip Helander and Leon Balogun have not looked out of place. Scott Arfield had a fantastic October and November. He was the one who was making the difference then.

"Joe Aribo has had spells where he's made a difference. Alfredo Morelos is now finishing the season strong and Glen Kamara has had an excellent period as well.

"I also feel really bad for leaving Borna Barisic out of my top five! In terms of getting up and down the flank, scoring goals and his set-piece delivery, he's been massive for Rangers."

However, Boyd eventually narrowed down his selections, picking out his five key players as Rangers romped their way to a 55th title. Find out who he selected...