Rangers remain in talks with Hearts over Kyle Lafferty 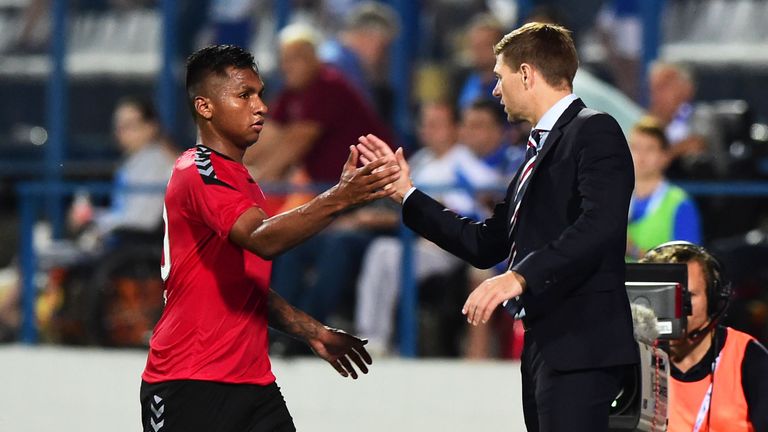 Steven Gerrard says Alfredo Morelos is a hero at Rangers

The Ligue 1 club saw a £3.75m bid rejected for the Colombian striker on Wednesday which Gerrard labelled a "derisory" offer and claimed it was nowhere near the asking price.

Rangers, who themselves have been linked with Hearts striker Kyle Lafferty, progressed to the Europa League play-offs on Thursday following a 0-0 draw with Maribor.

When asked if it would take far more for the club to sell Morelos, Gerrard replied: "It would take more than far more.

"The disappointing thing is the offer. The amount of the offer is nowhere near good enough for arguably our best player.

"We're trying to build a team around him to be successful. You can't come for someone's best player and offer what they did. That was disappointing."

Gerrard admits a possible sale of the 22-year-old may be out of his hands, but says the club must do everything they can by offering him a fresh contact.

"We can't fight to keep our best players and then not award them with what they're worth," he added.

"That's one for the board to discuss. In my opinion he should be looked after.

"My job is to manage the situation, tell him how much he is loved here. The fans sang his name non-stop last night.

"He is a big hero of theirs. It is my responsibility to keep heroes here for the fans to follow week in, week out."

My job is to manage the situation, tell him how much he is loved here. The fans sang his name non-stop last night.

Rangers return to action away at Kilmarnock in the Scottish League Cup on Sunday as they look to continue their unbeaten start to the season in all competitions.

When asked if he needed more players to cope with the workload of fixtures, Gerrard replied: "It's not just about the workload. It's about the positions.

"We feel a little light up front after losing Josh Windass to Wigan. He scored a lot of goals for us last season and the idea is to replace those goals in the coming weeks.

"At centre-back we're quite light. We are asking a lot of Connor Goldson and Nikola Katic who have been tremendous for us this season. We would like some cover in that area as well."

Rangers have been in talks over signing their former striker Lafferty, as confirmed by Craig Levein on Thursday, but the Hearts boss said a deal was "not inevitable".

However, Sky sources understand that Hearts and Rangers remained locked in negotiations on Friday over the Northern Ireland international.

The two clubs are believed to be edging closer to an agreement that would see Lafferty return to Ibrox, but it looks unlikely that any agreement will be reached before Hearts face Dunfermline in the League Cup on Saturday.

However, responding to his comments, Gerrard said: "Did you see Craig Levein's interview yesterday? So did I. So I think we both know where we are with that one."