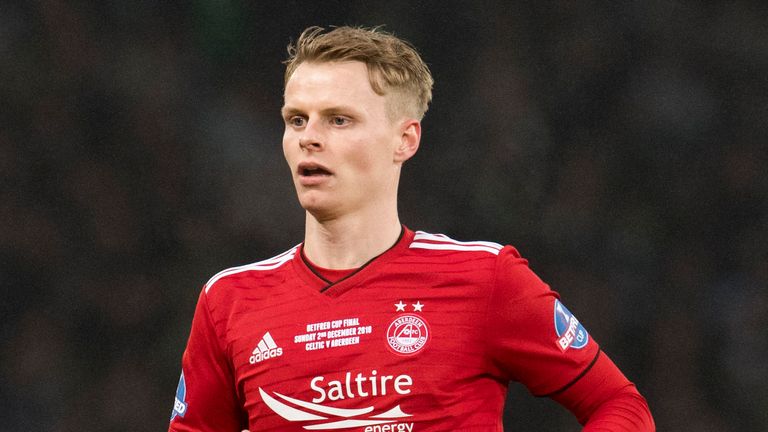 Aberdeen manager Derek McInnes is hopeful they can keep hold of winger Gary Mackay-Steven after MLS side New York City confirmed they are interested in signing him.

MLS side New York City have approached Aberdeen for permission to speak to winger Gary Mackay-Steven.

The Scotland international's contract expires in the summer, and the 28-year-old is free to talk to foreign clubs about a possible transfer.

Mackay-Steven has just returned to full training with the Aberdeen squad at a winter training camp in Dubai following eight games out after suffering concussion.

The Scottish winger suffered a serious head injury in the 1-0 Scottish League Cup final defeat to former club Celtic on December 2 when he clashed heads with Dedryck Boyata and was taken to hospital.

Aberdeen boss Derek McInnes is keen for Mackay-Steven to stay at Pittodrie, and has offered the winger a new deal at the club.

Mackay-Steven joined Aberdeen from Celtic in July 2017 and has made 57 appearances for the Dons, scoring 14 goals.

"We got notification from New York City that they wanted to speak to his representatives, as is their right," McInnes told Sky Sports News.

Aberdeen boss Derek McInnes has been named Premiership Manager of the Month for December while striker Sam Cosgrove has been handed the player award.

"Gary was oblivious to it. I spoke to him this morning and he knew nothing about it. When players get into this stage of their contract, you have got to accept you are in a fight to keep them.

"We have been in a fight to get Gary and others to commit for a while now but it is their right to let their contract run down and assess their options.

"All we've asked Gary and his agent is 'are we still in the running to keep you?' and they said 'absolutely'."