"At Chelsea I coached some very strong players, but training Cristiano Ronaldo will be yet another step forward. I'd like to help him break some new records" 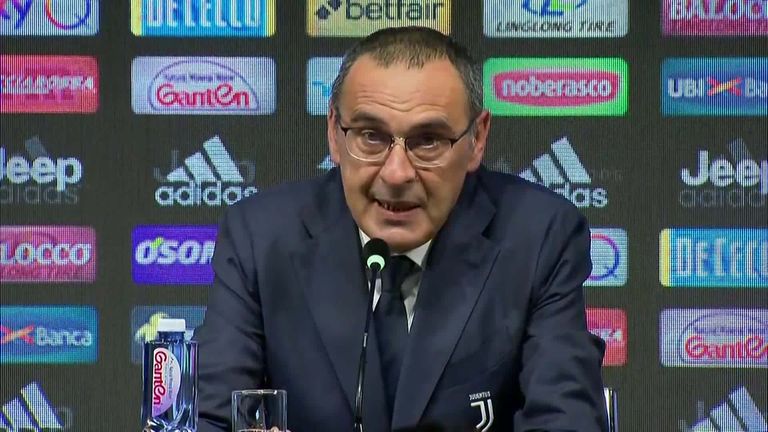 Maurizio Sarri says returning to Italy to manage Juventus is the 'crowning achievement of a long career' after a year in charge of Chelsea.

Sarri was presented as the new Juventus boss on Thursday following his signing on a three-year contract from Chelsea, where he won the Europa League in his final game in charge.

The Blues agreed a compensation package with the Italian club, understood to be worth around £5m for Sarri, who felt he needed to return to his native country for "professional and personal needs" with his two elderly parents living there.

Sarri said: "Juve are the best Italian club right now and offered me a chance to return to Italy. It's the crowning achievement of a long career.

"It's been a long journey for me made up of gradual steps. I'm happy to be at the most important team in Italy and this is a further step forward after the experience at Chelsea.

"I preferred to go abroad to avoid going from one Italian team to another. The Premier League experience was amazing, but for family reasons I desired go back to Italy.

"The opportunity was given by Juventus and it is I think also the climax of the career. I feel I have respected everybody." 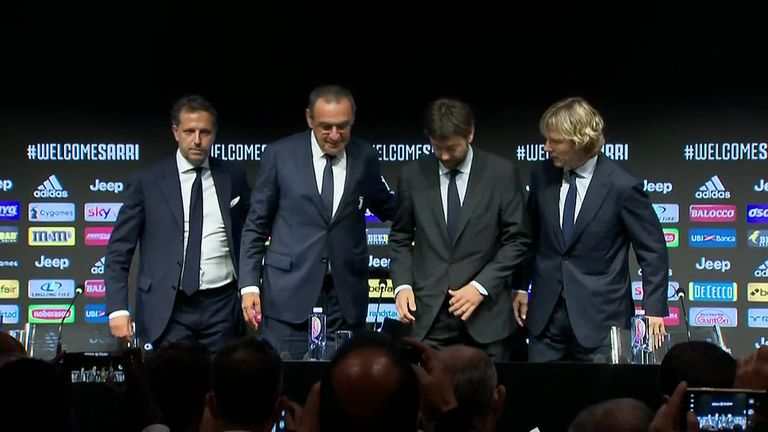 Although Sarri spent all of his managerial career in Italy up until joining Chelsea, he thinks Serie A is not up to the Premier League's standard.

"It's going to be an exciting year in Serie A, especially for the coaches. There's a long way to go but hopefully the league can start to close the gap with the Premier League.

"Chelsea FC had a lot of technically gifted players but with diverse characteristics, less fluid but just as solid.

"I realised being in England how amazing their stadiums are, the atmosphere in football in Italy has to change through infrastructure."

The Italian succeeds Massimiliano Allegri, who won five consecutive Serie A titles and brought Cristiano Ronaldo to the club last summer, and Sarri said it will be an honour to train the Portuguese great.

"At Chelsea I coached some very strong players, but training Cristiano Ronaldo will be yet another step forward. I'd like to help him break some new records.

"When you have a player with the qualities of Paulo Dybala or Cristiano they can play in any role. What can change is only the interpretation of the role.

"You have to have clear ideas on two or three players who can make a real difference for the team and then give them an environment to truly express themselves. If a team enjoys itself on the pitch then the spectators enjoy themselves and this is fuel to win.

"For three years I would wake up and think about how to defeat Juventus, because they were a winning team. I gave 110 per cent but we still couldn't do it. It was an experience and I will now give everything for this club."

Juventus' sporting director Fabio Paratici added: "Maurizio Sarri was always the first choice. We tried to make him understand right away that we really wanted him.

"We had clear ideas from the beginning, but we had to have respect for a coach that was under contract with another club and for this we thank Chelsea for their professionalism."