Report as Dortmund were minutes away from a draw in first leg after Marco Reus equalised Kevin De Bruyne's opener; Phil Foden capped a fantastic display with a late winner as Man City take slim advantage into second leg

Phil Foden shone and scored a late winner as Manchester City ran out 2-1 winners over Borussia Dortmund in the first leg of their Champions League quarter-final tie.

Pep Guardiola has never made it past the last eight in the Champions League with City and this looked set to be another frustrating night when Marco Reus equalised with six minutes left, cancelling out Kevin De Bruyne's first-half opener.

However, Foden, who was preferred from the start ahead of Raheem Sterling, popped up with a crucial goal as the clock approached 90 minutes.

Dortmund bravely pressed City at every opportunity in a superb game. Jude Bellingham had a goal controversially chalked off for a soft foul on Ederson after the goalkeeper had dallied on a back-pass, while Erling Haaland was denied by Ederson after showing immense strength to get through one-on-one in the second half.

City hold the advantage though going into the second leg next Wednesday in Germany.

How Foden and De Bruyne put City in command...

Despite having the powers of Erling Haaland in attack, Dortmund have dropped way off the pace in the Bundesliga and came into this game seven points off the Champions League places.

Yet even though their former City academy star Jadon Sancho was sat at home injured, they played with a determination not to allow the remainder of their season under interim manager Edin Terzic to drift away.

Bellingham, just 17-years-old but mature beyond his years, had the first serious opportunity of the night when he created space in the area but Ederson pushed away his left-foot strike.

City, again starting without a recognised centre-forward, took time to impose themselves but punished Dortmund's first major mistake to take the lead.

Emre Can mishit a pass straight to De Bruyne, who drove through the heart of the Dortmund midfield and whipped a ball out to Foden. The England man then sent in a low ball from the left and Mahrez's cut-back from the byline was tapped in at close range by De Bruyne, who had followed his run into the box.

City were given a penalty in strange circumstances on the half-hour after Rodri went down clutching his face following a challenge with Can. Yet it was not clear whether contact had been made and, after being asked to check the monitor by the VAR, referee Ovidiu Hategan eventually reversed his decision.

There was more controversy to come when the referee bizarrely disallowed a Bellingham equaliser.

Bellingham had closed down Ederson as he attempted a clearance and ended up taking the ball and tapping home as the Brazilian missed his kick. Any contact was Ederson catching Bellingham in his failed attempt to clear but Hategan gave a foul against Dortmund.

Haaland - quiet and well marshalled by Ruben Dias in the first half - then burst onto the scene after the break when he outsprinted and outmuscled Dias in devastating fashion to get in on goal but Ederson was alert to the danger.

City picked up the pace and went close on the hour when De Bruyne found Foden in front of goal but goalkeeper Hitz blocked his first-time shot.

City were beginning to find space in the Dortmund final third but the Germans are packed full of talent and scored a well-worked equaliser six minutes from time.

Bellingham found Haaland who cleverly flicked the ball into the path of Reus who broke into the area to clip over Ederson.

It looked set to be another one of those nights for Guardiola in a competition he hasn't won since 2011 but the effervescent Foden got the goal his play deserved when turning home from close range after De Bruyne had picked out Ilkay Gundogan with another sublime pass.

If Manchester City are going to complete an unprecedented quadruple, then De Bruyne will be at the heart of it. He is currently at the top of his game, playing a pivotal role in both of City's goals. The opening goal showed just how dangerous De Bruyne can be when given licence to get into goal-poaching positions usually taken up by a striker. His finishing is exceptional. Foden's goal came about due to De Bruyne's epic vision to pick out Gundogan at the back post. A special player.

Foden and Bellingham ran him close though. The future of English football looks in safe hands. 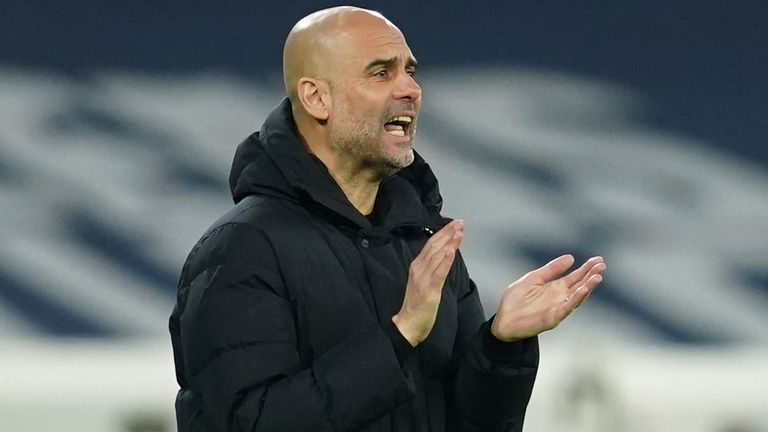 Pep Guardiola believes Manchester City will be under more pressure than Borussia Dortmund in Germany next Wednesday, despite taking a 2-1 lead into the second leg of their Champions League quarter-final tie

Pep Guardiola told BT Sport: "In the first half we were not clever with the ball but the second half was much better and at 1-0 we had two or three clear chances. Unfortunately, it didn't happen but after we conceded, we got the goal.

"To play good in the areas we want to we need to make good build-up and today was not good; Joao [Cancelo] and Rodri were not clever to receive the ball in positions for the other ones but it's difficult always to do what we want to do because they have quality. But it's a good result and we have another chance in one week.

"We're going to adjust a few things to go there and try to win the game.

"[Foden] was a threat in the second half. He was a real threat, arriving in the final third. He had two, three chances and finally scored."

Guardiola's side are back in action on Saturday for the early kick-off vs Leeds (12.30) before the second leg next Wednesday in Dortmund. The Germans play Stuttgart on Saturday as they look to improve their position in the Bundesliga.