England U21s knocked out of Euro 2021 by late Domagoj Bradaric goal for Croatia U21s, who qualify in their place; Liverpool's Curtis Jones sent off following mass brawl at final whistle; Aidy Boothroyd: "It is one of those highly emotive situations where sometimes things can happen" 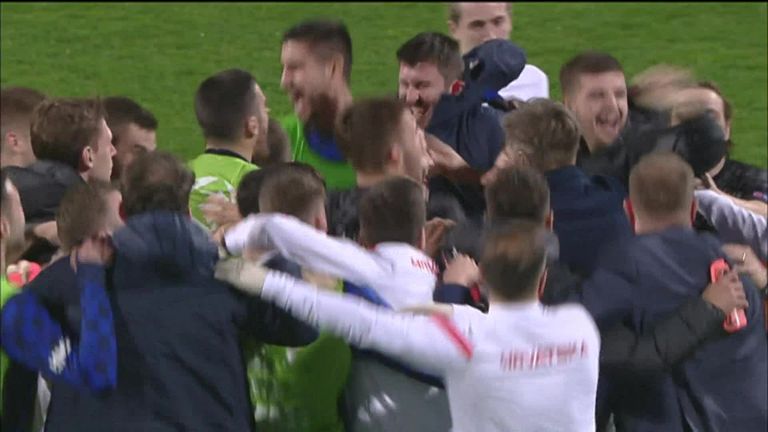 England U21 manager Aidy Boothroyd says Curtis Jones' sending off after the final whistle against Poland U21s was the result of a "highly emotive situation".

Domagoj Bradaric's injury-time stunner broke England U21 hearts to deny the Young Lions a place in the Euro 2021 quarter-finals, despite a 2-1 win over Croatia on Wednesday night.

A bloodied-nosed Curtis Jones was left angered at full-time as he clashed with the celebrating Croatia U21 players on the pitch moments after the final whistle. The Liverpool midfielder was sent off as tempers flared amid a mass brawl. 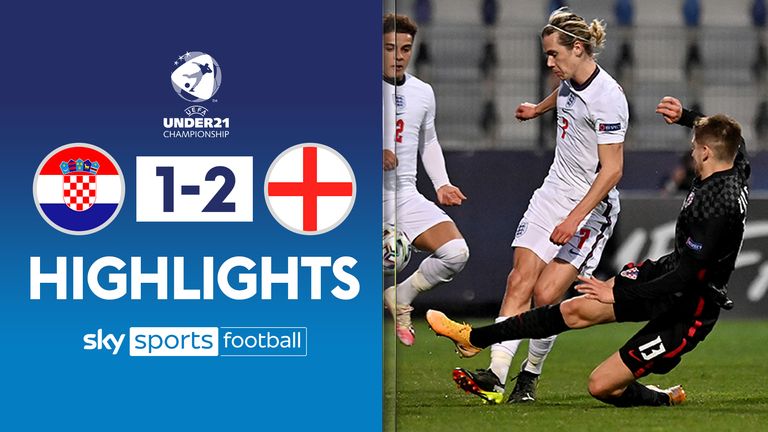 Boothroyd believes a combination of the Croatian players' celebration and their gamesmanship during the match provoked a reaction out of Jones.

"All their staff were on the pitch and celebrating in between some of our players and it just got a bit fraught", Boothroyd told Sky Sports after the game. 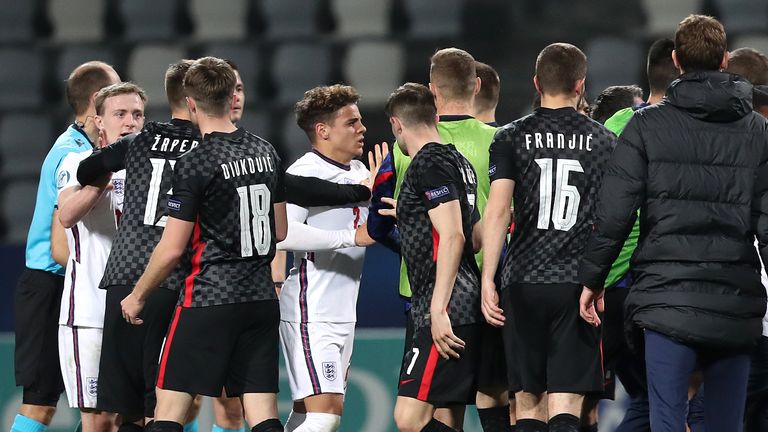 Aidy Boothroyd says emotions boiled over in a 'highly emotive situation', as Curtis Jones clashed with the celebrating Croatia players after the Young Lions were knocked out of Euro 2021

"Emotions got high. I've got to get to the bottom of the card [for Curtis Jones]. I have been unable to speak to the referee yet. I'll find out what when on there.

"It is one of those highly emotive situations where sometimes things can happen, thankfully both sets of staff sorted it out."

Portugal topped Group D after winning 3-0 and it is Croatia, rather than England, who will meet Spain in a quarter-final in May.

Boothroyd, who is out of contract in the summer, said after England's exit that he will continue to support senior boss Gareth Southgate.

Boothroyd hopeful of staying on

Despite another poor group-stage exit and his impending contract situation, Boothroyd told Sky Sports he was hopeful of staying on as U21s manager and leading them into a fourth European Championships campaign.

Asked if he was the best man for the job as Young Lions boss, he said: "I think so. The amount of players that have come through this system would suggest there is a pathway working. Our youngest players come into the building knowing they have a chance to play in the first team, with the way we're structured.

"I love being involved in these players. I really enjoy it, which makes it even more difficult to deal with it, to come out and speak with you and answer that question. It is a fair question to ask, I am going to keep going and we'll see what happens."

Boothroyd took charge of England's U21s for the final two games of qualifying and maintained an unbeaten passage to the finals, where the Young Lions lost on penalties at the semi-final stage to Germany. England had drawn with Sweden in their opening group game but recovered to beat Slovakia and hosts Poland, before drawing 2-2 with Germany in normal time at the final four stage.

Boothroyd said at the time: "We might not have been at our best for long periods but we showed a real British bulldog spirit. We could have nicked it but that's football. We've practised, practised and practised penalties but the keeper has made two good saves. It was a real effort - a real backs against the wall job at times. It's been a long journey. The tournament has been fantastic. I'm sure there will be future senior players in this team."

England once again qualified for the finals without suffering defeat - but dramatic late goals from France and Romania saw England eliminated from the group stage with a game to spare. France struck in the 89th and 94th minute to snatch a 2-1 win in the opener before eventual finalists Romania grabbed a 4-2 victory with strikes in the 89th and 93rd minute, with their third coming via a Dean Henderson error. To add salt to the wounds, Croatia netted an equaliser inside the final 10 minutes to draw the dead rubber third group game 3-3.

Boothroyd said at the time: "I genuinely believed we could do it but Dean Henderson's mistake, we all make mistakes and it's important we make sure he knows how important he is to us. If you don't take your chances and are not disciplined enough to stay on your feet, you are going to get punished. In order to get through this we have to take the positives out of it. We are on the right track in terms of how we play the game but we need to iron out the mistakes."