UEFA announced each nation can have a squad of 26 players for this summer's European Championships; England manager Gareth Southgate is considering naming a core squad of 23, with a further three players only featuring if there are injuries, suspensions or coronavirus issues

Gareth Southgate has real concerns about how to keep an enlarged squad of 26 players happy during the upcoming European Championships.

The England manager is considering telling the players before the first game which 23 will form his core squad, and which three players will only come into contention if others are unavailable.

UEFA has decided that, for the first time in the history of the competition and because of the unique difficulties posed by Covid-19, each nation can have a squad of 26 players - although only 23 can be named on any matchday team sheet.

Southgate is still mulling over his options, but Sky Sports News has learned it is possible that three players in his squad will be told they will only feature if there are injuries, suspensions or coronavirus issues.

Personally, I wouldn't want to have too big a squad. I think there's a skill in picking your 23.

The other option is to have to disappoint three players the day before each game in the tournament, when they will be told they are not included in the starting XI or on the bench.

It is thought the England manager has concerns that could lead to greater disharmony in the camp from those who miss out.

Southgate made his opposition to the enlarged squads last month. He said: "Personally, I wouldn't want to have too big a squad. I think there's a skill in picking your 23. I think you end up with a lot of players not playing anyway and it's difficult to manage and it's hard for the squad to come through." 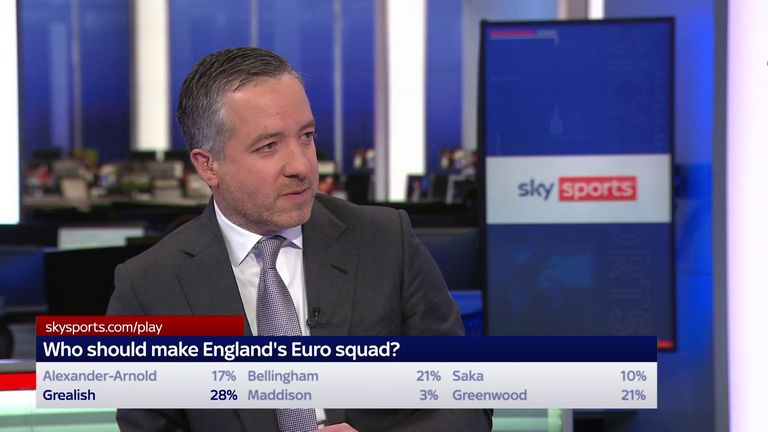 Unlike Southgate, other European managers have voiced their support for the new rule by UEFA.

Belgium manager Roberto Martinez said last month: "I think it's something that's needed. It would match the changes that have been made in the current situation in world football, with the five substitutions, the uncertainty of the pandemic attack and the extra level of injuries, I think it would be a good thing to do."

Italy's Head Coach Roberto Mancini said in March: "You never know what will happen. What if someone tests positive for Covid?"