Watch Belgium vs Scotland live on Sky Sports Main Event live from 7pm on Tuesday; Kick-off is at 7.45pm

Andy Robertson has said that Eden Hazard is "probably the best player" he has come up against after the Belgian's recent move to Real Madrid.

Hazard was announced as a Real Madrid player on Friday, in a deal from Chelsea that could rise to a club-record transfer of £130m.

He spent seven seasons at Stamford Bridge, where he won two Premier League titles and two Europa Leagues, the most recent of those European successes coming this season.

"He's probably the best player I've come up against in the Premier League and he deserves his move and all the plaudits he gets," Robertson said.

"He's probably one of the best in the world at the minute.

"But it all comes back to showing him respect because of his ability but not showing him too much respect that we fear him. 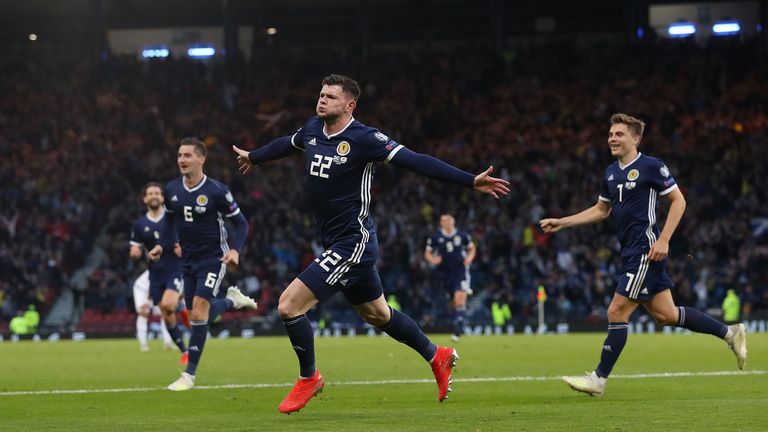 "We need to try and defend him out the game but we know tough that'll be."

Robertson, who lifted the Champions League with Liverpool, scored the opening goal in Scotland's 2-1 win over Cyprus on Saturday.

They now come up against Hazard's Belgium side in their European Qualifier on Tuesday and the left-back believes that they need to make it harder for the top sides to play against.

He said: "We've not had a big result since probably England and there was still some disappointment because of the late goal.

"Since then, the big nations have turned us over if we're being honest.

"We need to try and make ourselves hard to beat against the top nations again.

"When I first came into the squad, the top nations didn't like playing against us and they might have got the results but they knew they had to work for it and that's what we need to get back to."

Belgium have won all three games in Group I so far, scoring eight and conceding just one.

Robertson knows how tough it will be to overcome Roberto Martinez's side and said: "If Belgium play to their best and take their chance then most likely they'll beat us but we need to make them work for their three points.

"If we can frustrate them and if things aren't going their way then that's when we build our confidence and we have people on the park who can cause them problems too, you just never know. "The bigger nations used to know what we could do but now it's too easy for them. We need to change that mentality.

"We have the quality in the squad to cause big teams problems, we're a good squad that's got an abundance of ability and we need to show what we deserve.

"For us to get a result, Belgium need to have an off day and that's the nature of it."