Scotland qualified for their first major tournament since 1998 after David Marshall saved Aleksandar Mitrovic's penalty in a shootout to send them to Euro 2020; Scotland face England in Group D; Scots will play twice at Hampden Park home and once at Wembley

Ryan Christie poured his heart out while the usually reserved Steve Clarke admitted he may "go for a cry later" as emotions were on show after Scotland's triumph in Serbia to qualify for Euro 2020.

Scotland put their fans through the wringer as they qualified for their first major tournament since 1998 after David Marshall saved Aleksandar Mitrovic's penalty in a shootout to send them to Euro 2020. Scotland have been turned upside down by Clarke's influence in the dugout with a run of nine matches unbeaten and the boss couldn't hide his emotions at full time despite claiming "he was calm" during the shootout.

Clarke told Sky Sports: "It took a bit of time to get people onside, but we've been positive and no one can be more proud than the players on the pitch. One or two of the boys have been in tears and that shows how much it means.

"When David Marshall saved the last penalty, I had a little glint in my eye. I may have a cry when I get to my room later.

"Normally, we fall at the final hurdle or we have the glorious failure, but I thought we were the better team in the game and deserved to be in front. We just couldn't get the second goal to kill them off.

"To concede then from a set play when they were throwing everybody into the box was a big setback, but you have to be so proud of the players, the way they responded to that. Scotland manager Steve Clarke said he may shed a tear back in his hotel room after his side qualified for their first major tournament since 1998.

"That was a sore one as we were really close to where we wanted to be. The reaction was to dig in during extra time, and we managed to do that. We got to penalties and we've managed to produce again from the penalty spot. It's a magnificent night for everyone in Scotland.

"We said we'd try to put smiles back on faces and I hope they managed to enjoy the match as we did here in Belgrade. They can smile tomorrow."

Speaking on Friday morning after a night of little sleep but much celebration, Clarke revealed how a change in environment within the national set-up helped them qualify for the Euro 2020 finals, where he hopes the Tartan Army will be able to cheer their heroes on in person. Scotland head coach Steve Clarke admits their penalty shootout victory over Serbia to qualify for Euro 2020 has not fully sunk in yet.

"We've been working for a long time to get positivity around the national team. We managed to get that in the October games and for this match against Serbia," Clarke told Sky Sports News.

"We said we'd try to make the nation smile and hopefully we've done that. I looked at what I did as a club manager and how I could adapt that to international football.

"It's about understanding that they're not your players, you borrow them. But you want to make them comfortable when they come into this environment, so we've worked hard on that.

"We've tweaked and changed [things]. Maybe a little less training. I'm a coach and I like to be on the pitch with the players but with international football you have to be a little more studious.

"You have to work a little more in the training room, with a little less intensity in training but try to create an environment where players want to come.

"When you are winning matches, it makes it that much easier and the long unbeaten run helps as well." 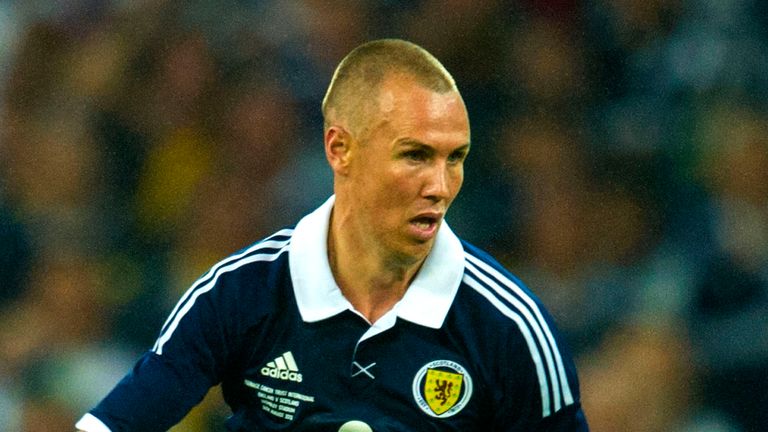 England vs Scotland at Euro 2020 will be a special fixture, according to Kenny Miller, who scored for his country at Wembley during his career.

As for Euro 2020 itself, Clarke is hopeful the coronavirus pandemic will have eased enough for at least some Scottish supporters to be able to attend their group games against Czech Republic and Croatia at Hampden Park, as well as the eagerly awaited trip to Wembley to take on England.

"It would have been a shame if the games had been at Hampden and the Scottish national team wasn't involved," added Clarke.

"Hopefully by the time we get to next summer the global pandemic and the misery we are all suffering just now will hopefully be a little bit more under control.

"The Tartan Army have waited a long time to celebrate - and hopefully next summer they can do that." 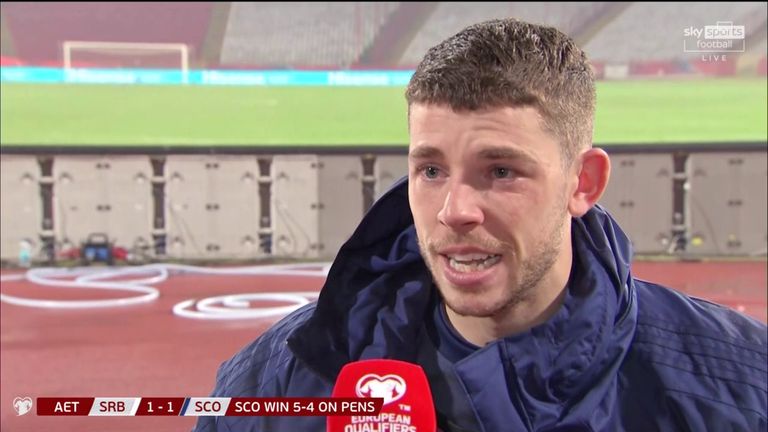 Ryan Christie was moved to tears after helping Scotland secure their place at Euro 2020 with a penalty shoot-out win against Serbia.

Christie thought he had netted the winning goal during normal time but a Luka Jovic injury-time equaliser forced extra time. The Celtic man linked the play between the lines with great maturity and this was on show for what looked to be his match-winning moment from 22 yards - a goal that would have graced any major tournament.

He was replaced in the closing stages of normal time, so had to watch on from the touchline as the drama unfolded.

"It is just an amazing night," a tearful Christie said.

"From the start, we kind of believed. Obviously, the last few camps we have picked up so much belief in each other. Even the way the game went tonight, conceding that late equaliser and still digging in. Penalties and you're away from home but big Marshy again comes up. He's unbelievable.

"When you are on the pitch, you always feel like you can influence it. When you are off, you can't watch. Those penalties are the worst thing I have ever been through. It's just everything. Oh, I'm gone.

"It is just for the whole nation. It has been a horrible year for everyone. We knew coming into the game that we could give a little something to this country. I hope everyone back home is having a party tonight because we deserve it.

"We have been through so many years. We know it, you know it, everybody knows it. It's a monkey off the back now. We are just going to move on from here."

Scotland's penalty-save hero David Marshall is hoping the Tartan Army will be able to cheer them on in person next summer.

Clarke's side will face the Czech Republic and Croatia at Hampden Park either side of a trip to Wembley to play England next June at Euro 2020 and after a 22-year absence from major international tournaments, Marshall is keen for the fans to be inside the stadiums.

Marshall said: "Obviously I am a certain age now that I can remember old tournaments. It's been so long and it's just massively emotional.

"I am just delighted to be there. It has probably not sunk in. You saw Ryan Christie was in tears and it just shows how much it means to the lads to get there.

"Obviously families are willing us on, fans who can't be here. Hopefully by next summer everybody can get the chance to go.

"The travelling fans over the years have just been incredible. So I'm so happy [and] just desperate that come tournament time, the Covid situation is cleared up and the fans can go and enjoy it."

As for his dramatic penalty that sent them to the Euro 2020 finals, Marshall did not immediately celebrate in case he was penalised for encroaching.

"Immediately after it was a delay because the ref had said 'don't celebrate if you save because there's a VAR check'," he added.

"I got the decision before the lads jumped on me, thankfully. I just hoped and prayed that he wouldn't order a retake because the lads were on their way They didn't know it was being checked.

"I did feel it was good. I had a tiny bit of doubt but the referee let us know pretty quickly. But when you have waited 22 years, what's another four or five seconds?" 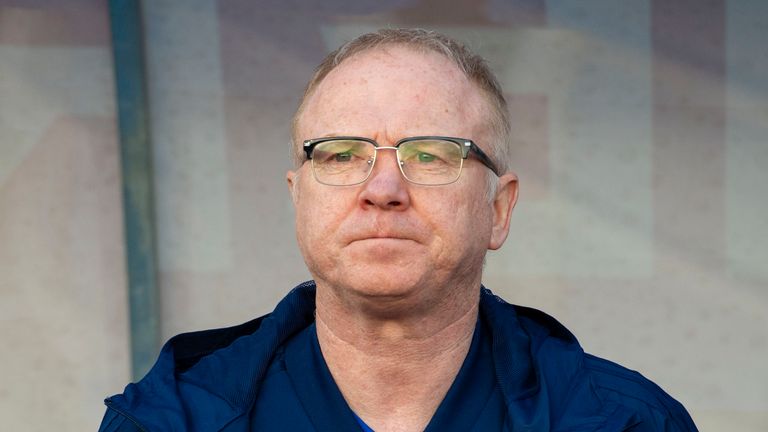 Robertson: Most emotional I've been

Scotland captain and Liverpool full-back Andy Robertson admitted it was "the most emotional he had been after a game" and praised his team-mates' mentality.

"I don't think I can [sum it up]. There was so much emotion going into the game, and then you get so close and they end up equalising. You have to pick yourself up for extra-time, which we did. When you get to penalties, you always back Marshy and it's just whether the lads can hold their nerve, and they managed to do it.

"We've come so far with this squad and I back every one of them as they've come through a lot of criticism and a lot of negativity at times.

"We've stuck together and battled through it. I really hope everyone back home can see the positive side to this as we're absolutely delighted. I really hope that during a really tough time, we've managed to put a smile on a lot of faces.

"It's the most emotional I've been after a game but we can look forward to next summer now."

Analysis: Mitrovic was going for glory

"Unbelievable! The shoot-out was excruciating! I am buzzing! David Marshall is a hero to the whole country! But the standards of all the penalties was brilliant.

"Talk about character. Those lads weren't stepping up thinking, 'Imagine if I'm the one to miss'. They were positive - and then Marshall was the hero.

"I fancied every one of them stepping up. There was something about Mitrovic; he was saving himself for fifth. Our main striker stepped up first - bang, into the back of the net. People thinking about glory and headlines; that's what I thought about Mitrovic.