Jesse Lingard was named in Manchester United's Premier League and Champions League squads but is yet to feature in either competition this season; the midfielder has made two EFL Cup appearances after a summer move failed to materialise

Jesse Lingard's representatives are exploring loan options for the Manchester United midfielder in January, with Real Sociedad one of the clubs they have held initial talks with.

The 27-year-old's contract at Old Trafford runs out in the summer, with United yet to trigger their option of extending it by a further year.

Lingard has not featured in the Premier League or Champions League this season despite making the squad for both competitions.

In the EFL Cup, he started the third-round win over Luton and was then brought on late in the fourth-round victory over Brighton. He has been an unused sub in the Premier League twice, and once in the Champions League.

The lack of game-time could see Lingard move on loan when the transfer window opens next month, with his representatives speaking to Sociedad among other clubs.

Sociedad are currently second in La Liga with seven wins from their opening 12 games, with David Silva joining the Basque club over the summer after leaving Manchester City. 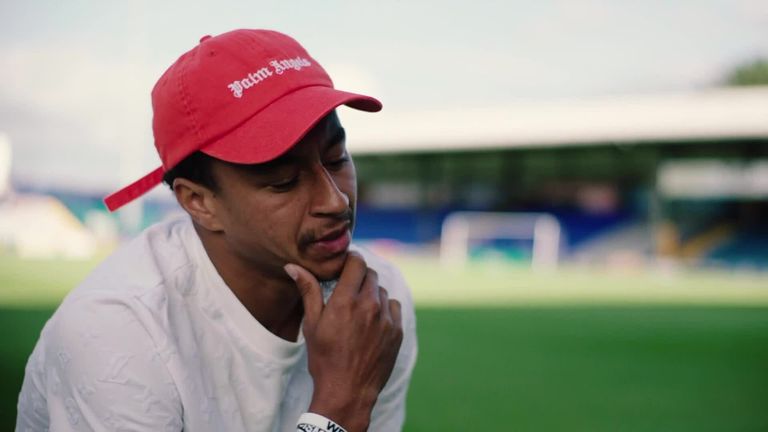 Over the summer Jesse Lingard spoke of how talking about his off-field problems made him feel 'so much better', as part of the Heads Up mental health campaign

Lingard's representatives held talks with several clubs in England and Europe in the summer, but a move did not materialise.

The United academy graduate scored four goals in 40 appearances across all competitions last season, while he has not represented his country since England played in the UEFA Nations League Finals in June 2019.

Sky Sports News reporter Kaveh Solhekol examines why some of England's 2018 FIFA World Cup heroes have struggled to break into the Three Lions fold since that unforgettable campaign in Russia, including Lingard...

"It is easy to forget just how good Jesse Lingard was for England in the summer of 2018. He started every big game and he stayed on the pitch for the full 120 minutes in the crucial clashes against Colombia and Croatia.

"His standout memory will be his brilliant goal in the win against Panama which was on the shortlist for the goal of the tournament.

"It is fair to say though that Lingard's career has not gone as he would have hoped since the highs of that summer.

"The playmaker has lost his place in Manchester United's first XI and a change of agents led many to assume that he would be leaving Old Trafford.

"His ability is still there though but he has not featured in the league this season. The 27-year-old's only first-team start so far has come in the 3-0 win at Luton Town in the EFL Cup.

"Lingard's first priority is to get back to playing regular club football. His best chance of doing that appears to be at another club when the transfer window opens next month.

"The road back to a place in the England team is going to be long and hard but he is still only 27 and he has proved people wrong before."