Manchester United: Will difficult March fixtures be the undoing of Ralf Rangnick's side?

Manchester United face Manchester City, Tottenham, Atletico Madrid and Liverpool in March; they are currently fourth in Premier League, two points ahead of West Ham and Arsenal; if knocked out of the Champions League, United will almost certainly go five years without a trophy

Gary Neville labelled March as a "big month" for Manchester United and looking at their fixtures, it is easy to see why.

Premier League games against title contenders and top-four rivals combined with the visit of Atletico Madrid in the Champions League make for a huge test for United.

After interim manager Ralf Rangnick had called for the team to maintain momentum in their pursuit of a top-four finish, Saturday's goalless draw against Watford leaves United just two points ahead of West Ham and Arsenal.

They are still fourth, but the Gunners have three games in hand and after winning all of their games in February, Mikel Arteta's side currently look poised to make a strong claim for a Champions League spot.

"It feels once again like two points dropped that we should have easily won," he said. "I think we did everything apart from scoring and had enough chances to win that game. But we didn't. And that's why we draw and dropped two important points in a very important game." 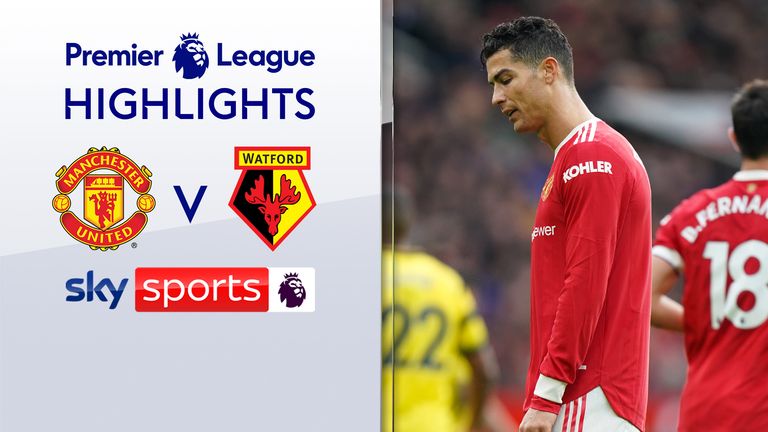 FREE TO WATCH: Highlights from Manchester United's draw with Watford in the Premier League.

Having won just twice in seven fixtures in February, including an FA Cup exit on penalties against Middlesbrough, what does March hold for United and could the club be left without a trophy for a fifth consecutive year?

When asked if March could prove to be a defining month, Rangnick said: "It could be but it only makes sense to take one game after another."

United will begin the month by taking on Premier League leaders, Manchester City, on March 6 at the Etihad Stadium. The champions have dropped points just twice since losing to Crystal Palace in October, including their last home game which they lost 3-2 to Tottenham.

In spite of this, City have dominated throughout the season and have all but progressed to the quarter-finals of the Champions League after dismantling their last-16 opponents, Sporting Lisbon, 5-0 in the first leg of their tie.

The previous Manchester derby in November was former United manager Ole Gunnar Solskjaer's penultimate game in charge and ended in a 2-0 loss at Old Trafford.

FREE TO WATCH: Highlights from Manchester City's win against Manchester United in the Premier League.

United will then host Tottenham on March 12, who have been inconsistent under new head coach Antonio Conte. Spurs beat City and Leeds in February, but also lost to relegation-threatened Burnley.

Both clubs were under different managers when they last clashed in October - Tottenham were managed by Nuno Espirito Santo, while United were under Solskjaer's stewardship. The game finished 3-0 in United's favour, with news of Santo's departure swiftly following the result.

Following this, United will turn their attention to the Champions League on March 15 as Atletico Madrid visit for the second leg of their last-16 tie.

The first leg ended in a draw at the Wanda Metropolitano as Joao Felix's early headed goal was cancelled out by Anthony Elanga's late strike - the teenager's first in the competition.

With the away goals rule having been abolished by UEFA this season, Rangnick's side will face a difficult test to progress to the quarter-finals of the Champions League. If United are knocked out by Atleti, this season could mark five years since their last trophy, when they won the League Cup in 2017 under Jose Mourinho.

United will finish March by travelling to Anfield on March 20 to face Liverpool, who sit second in the Premier League, six points behind City.

Liverpool emerged victorious against Chelsea after a penalty shoot-out to win the Carabao Cup and remain in contention to win a potential quadruple this season. Jurgen Klopp's squad are in the midst of an impressive unbeaten run and have not lost so far in 2022.

United's last meeting with Liverpool was at Old Trafford in October where they were embarrassingly defeated 5-0 by their North-West derby rivals as Salah scored a hat-trick.

FREE TO WATCH: Highlights from Liverpool's win against Manchester United in the Premier League.

Manchester United can take a couple of small comforts into the apparent bleakness of March.

Academy graduate Anthony Elanga is emerging as a bright talent, having scored two goals in United's last three fixtures as the 19-year-old found the net against Atletico Madrid and Leeds.

Such was his performance against the Spanish side that Rangnick singled the teenager out for praise after the game.

"Anthony is playing as if a dream has come true. It's a joy to watch him play and I wished some of the other players used him as an example and as a role model," Rangnick said.

"He enjoys himself on the pitch and this is how I hope we play collectively in the future."

Elanga has featured in all of Manchester United's games since the turn of the year and appears to be key in Rangnick's plans, having started in a number of these games and he will likely be called upon again throughout March.

Jadon Sancho had a difficult start to life as a Manchester United player after joining the club in a £73m deal last summer, but has started to hit his stride in recent weeks.

The 21-year-old scored in the club's 1-1 draw with Southampton and registered two assists as United defeated Leeds in a 4-2 victory at Elland Road.

Sancho has averaged 2.12 key passes per 90 minutes in the Premier League this season, ranking him in the top 11 per cent of attacking midfielders and wingers in the division. The winger is averaging 4.17 shot-creating actions and 2.33 completed dribbles per 90 minutes, placing him in the top 12 and 14 per cent respectively among other players in a similar position in the league.

Sancho's burgeoning influence on games will be essential in continuing to provide chances for United's forwards - whether or not they will capitalise on these opportunities is another prospect.

Neville: The test is now the next month

Manchester United have got to become more difficult to play against.

It is a big month and that month is going to define the season in terms of finishing in the top four and progressing in the Champions League.

But the test is now the next month. This period was always going to come and it is here.

It is inconceivable that, coming out of Tottenham at home, Manchester City away and Liverpool away that they are going to get seven to nine points. As a United fan, I hope they do, but they could easily come out of those three games with four points or five points or three points - you don't know. They are the type of games in any season over the last five or 10 years you could lose.

If you are Ralf Rangnick, you have got to plan that you are going to drop points in those three matches, not that you would foresee it or want it, but it could happen. These points that he has got from these last few matches will be needed. Arsenal have still got games in hand, as have Tottenham. There's a long way to go, but Manchester United are in a decent position.

If you had said to me when Rangnick took over with the run of fixtures that they have got, this is where I would have wanted them to have been, maybe a point or two in front. I still don't think it is plain-sailing and I still think it could turn quite quickly as I don't think it is stable behind the scenes at all.

It is really important they get that fourth-place spot.