Mary Earps, Millie Bright and Keira Walsh have been vital in England's journey to the Euro 2022 semi-final; However, should Alessia Russo replace Ellen White up front?; England take on Sweden on Tuesday evening at Bramall Lane; kick-off 8pm

Let's start with the obvious - football is a team game. There are players who grab the attention, usually goalscorers, but it takes all sorts of cogs to make a successful and winning team.

It's easy to pick out the headliners in this England squad. Beth Mead scored five goals in the group stages and remains the leader for the tournament's Golden Boot. Alessia Russo has been the Lionesses' super sub, scoring three times from the bench, and her Manchester United team-mate Ella Toone has also shone.

These players have led England's devastating attack that has powered Sarina Wiegman's Lionesses into the final four of Euro 2022.

But England's central spine of Mary Earps, Millie Bright and Keira Walsh have been just as key - some may argue even more so than the forward players.

All three showed exactly why against Spain in the quarter-final. Earps, in particular, had not needed to make many saves of note during the group stages - there were one or two against Austria and Norway, while Northern Ireland's Lauren Wade did her best to beat Earps at St Mary's - but kept England in contention on more than one occasion against La Roja.

She commanded her box well for the most part, despite conceding her first goal of the tournament. Perhaps the pick of Earps' performance was her palmed save from Athenea del Castillo's audacious cross in the second half which looked destined to loop into the far corner.

The player there to clear the ball after the save? The ever-reliable Bright, player of the match against Spain. 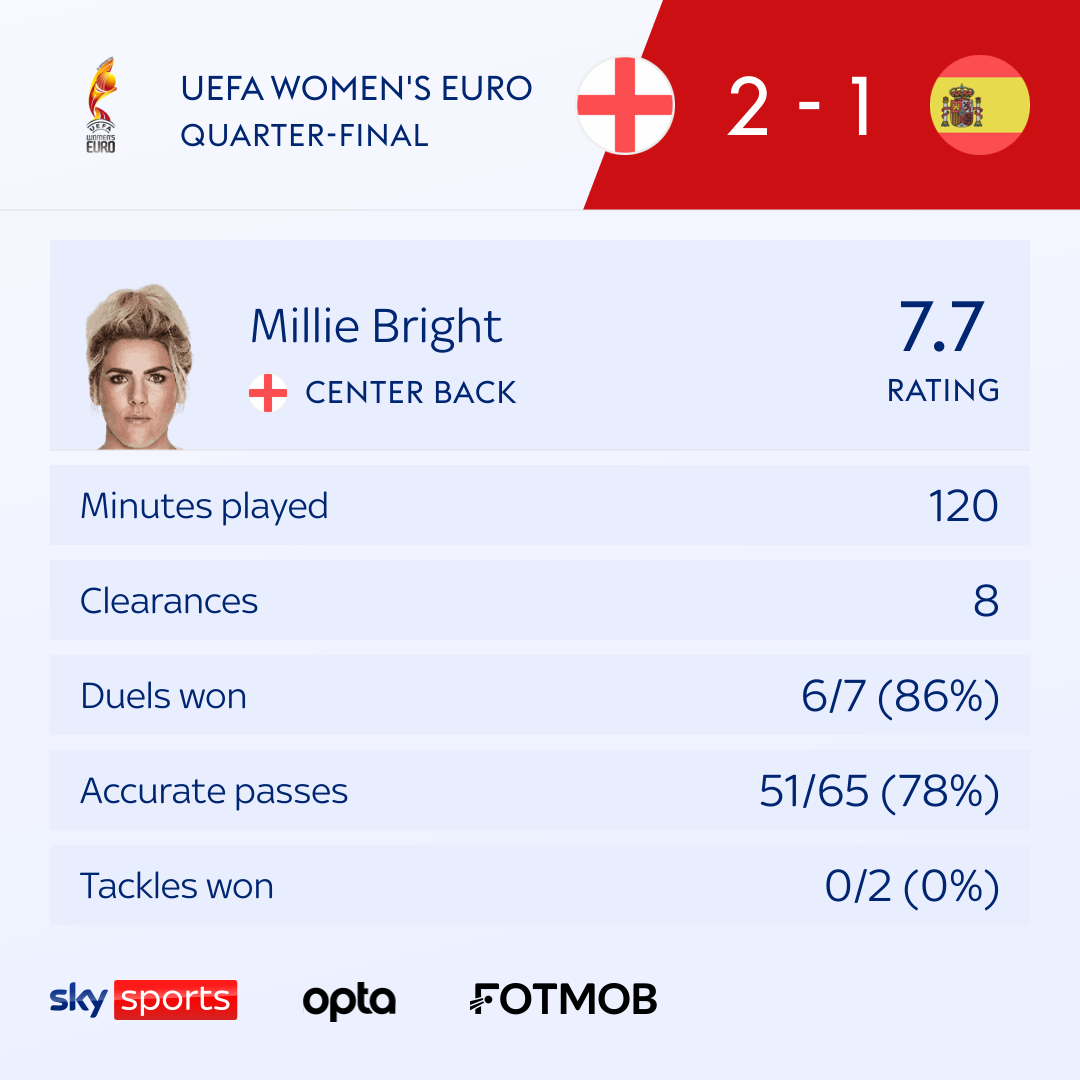 The Chelsea defender went into the summer off the back of a sensational domestic season with Chelsea. She helped the Blues to another Women's Super League title and FA Cup. Bright ranked second in the entire WSL for passes attempted and passes completed last season. She also ranked fifth for long passes completed and second for touches.

She has bought that form into the Euros. It's those long passes out from the back that have helped unlock defences, picking out the runs of Mead or Lauren Hemp on the wing, or sometimes going shorter to the midfield. 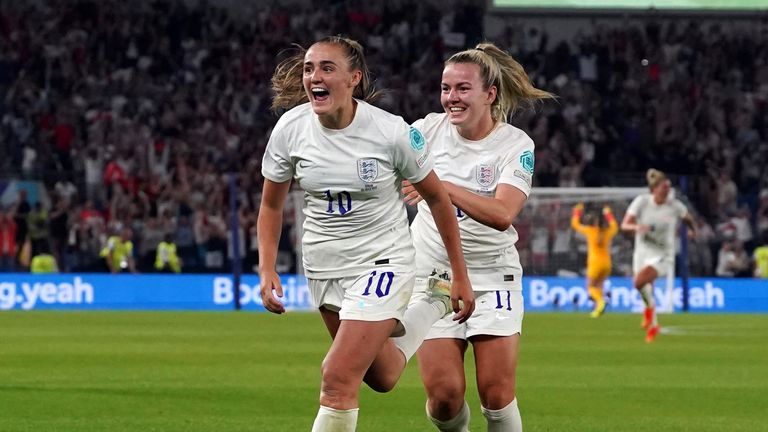 She has also been imperious inside the area, especially in the air which was vital in stopping crosses in from the dangerous Spanish wingers.

While she may have not found the net against Spain, a somewhat risky tactical change from Wiegman saw Alex Greenwood replace Rachel Daly, and Bright pushed further forward. England equalised two minutes later with Bright's movement in the build-up contributing to Russo's nod down and Toone's space to finish.

Another key component of England's success has been Walsh. The midfielder is the Lionesses' secret weapon and a midfielder of supreme talent - the team simply would simply not function in the same way without her.

While some teams will double up on Hemp and Mead's darting runs down the wings, it is more difficult to restrict Walsh in midfield - but very possible. Spain almost managed it to devastating effect, allowing her no time on the ball to dictate the play, and it was not a surprise that England began to improve once Walsh hit her stride.

Sky Sports' features writer Nick Wright said: "When Walsh was finally able to find space for herself as England searched for their equaliser and Spain became stretched, she began doing the things she does best, carving the opposition open and providing the ammunition her team-mates needed. 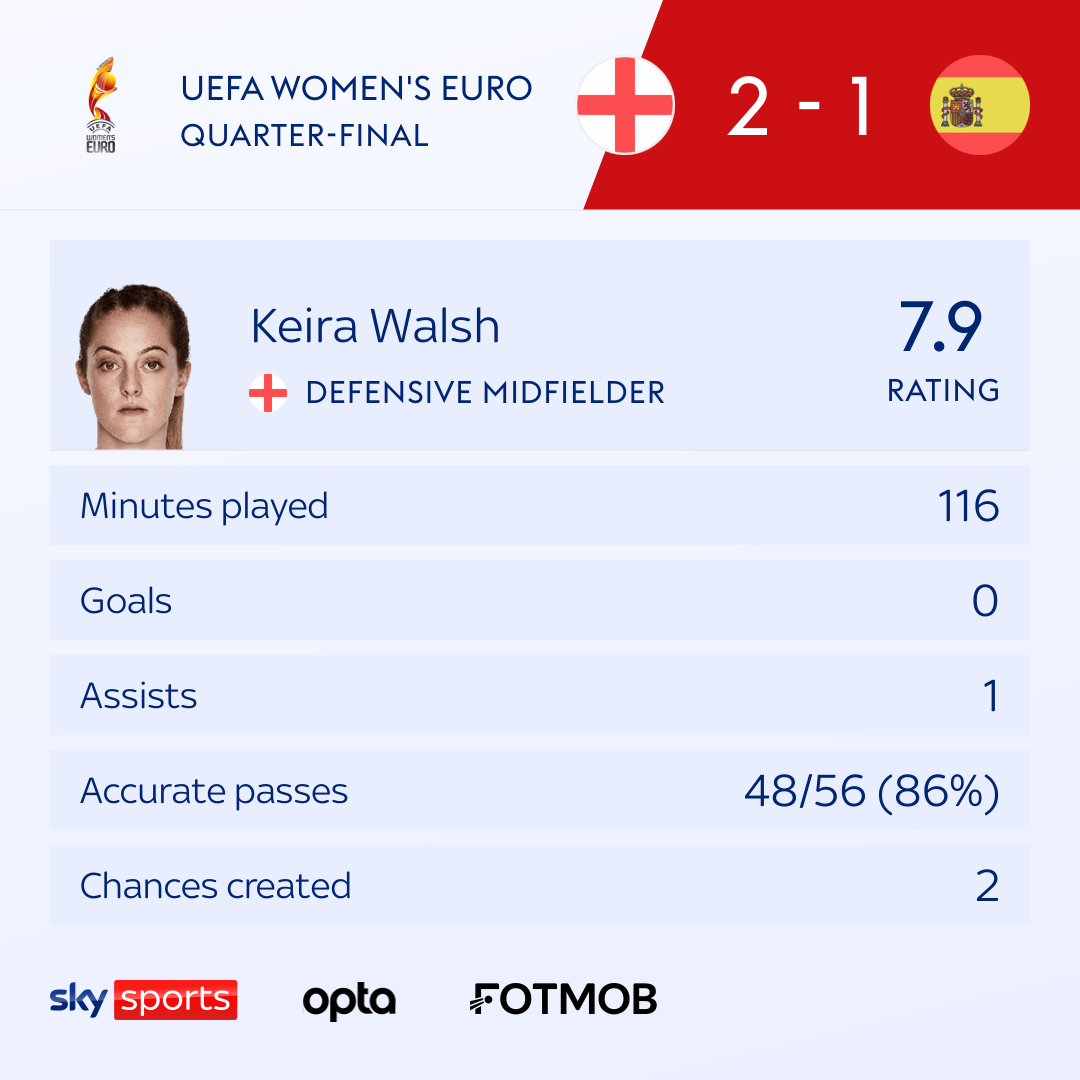 "She was involved in the build-up to the equalising goal, a key figure in the patient build-up play which allowed Lauren Hemp to cross for Alessia Russo to set up fellow substitute Ella Toone.

"In stoppage time at the end of normal time, there was a sublime, diagonal pass to release Chloe Kelly on England's right. Not long after that, a brilliant through-ball for Hemp sent her Manchester City team-mate scampering into the Spain box.

"Walsh even claimed the assist for the winner, feeding Stanway to charge forward and score in sensational style. Stanway's strike ensures her name will dominate the headlines, but it was Walsh who laid the groundwork for the turnaround." 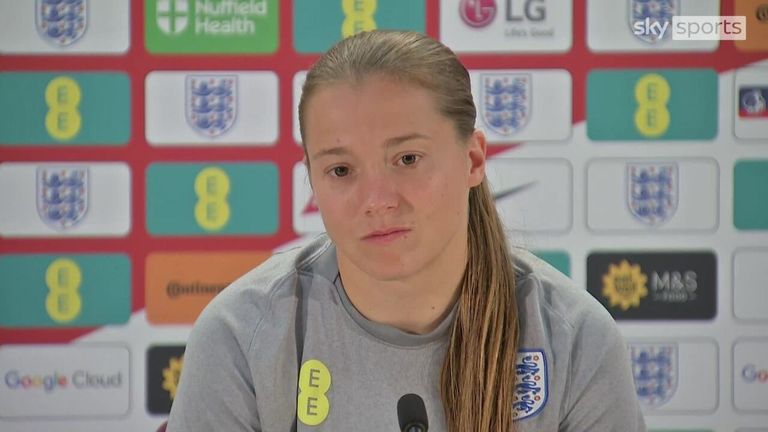 Of course, no spine of a football team is complete without a striker - and this is where some debate begins. In reality, Sarina Wiegman is unlikely to drop Ellen White. The forward has started in every Euro 2022 game so far and the head coach has been consistent in her message that she is unlikely to change the starting XI.

But Russo has given her one mighty decision to make, with pundits and fans alike starting to ask whether the 23-year-old should be given the start spot up front.

White is one of England's most experienced tournament players and their all-time leading goalscorer. Her pressing play against Norway was key in the 8-0 win, but in other games, White has missed chances she might have put away in previous years. Perhaps an inconsistent season with Manchester City is starting to come into play.

Russo has long been a favourite at Man Utd and after a knee injury ended her 2020/21 season, has come roaring back into form since her return for club and country. She has come on as a substitute in all four games so far, scoring three goals, including two against Northern Ireland.

She offers something different to White. England's top goalscorer has a lot of off-the-ball intelligence in terms of movement and pressing, opening thing up for her team-mates, while Russo is more of an all-round creator and works better with the ball. 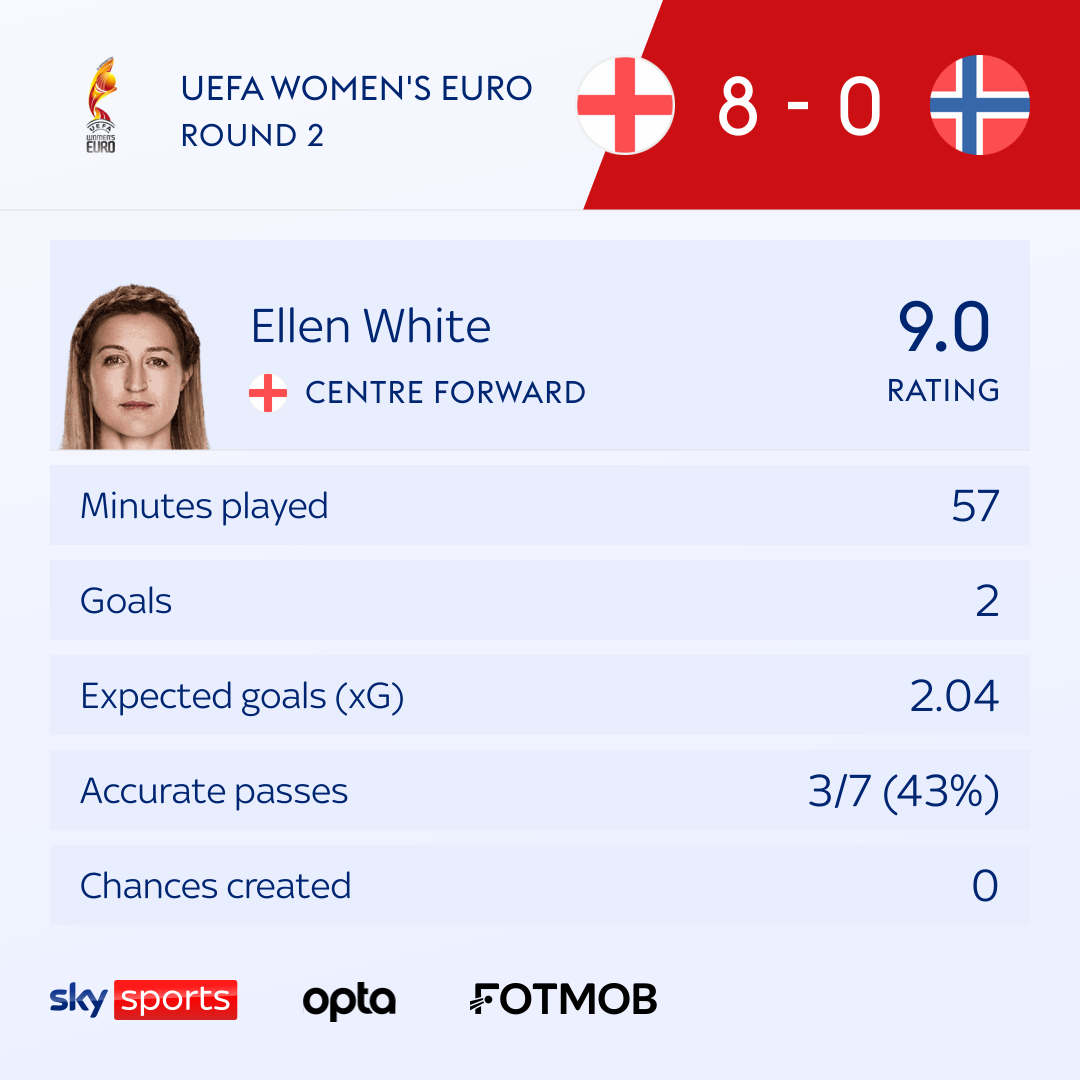 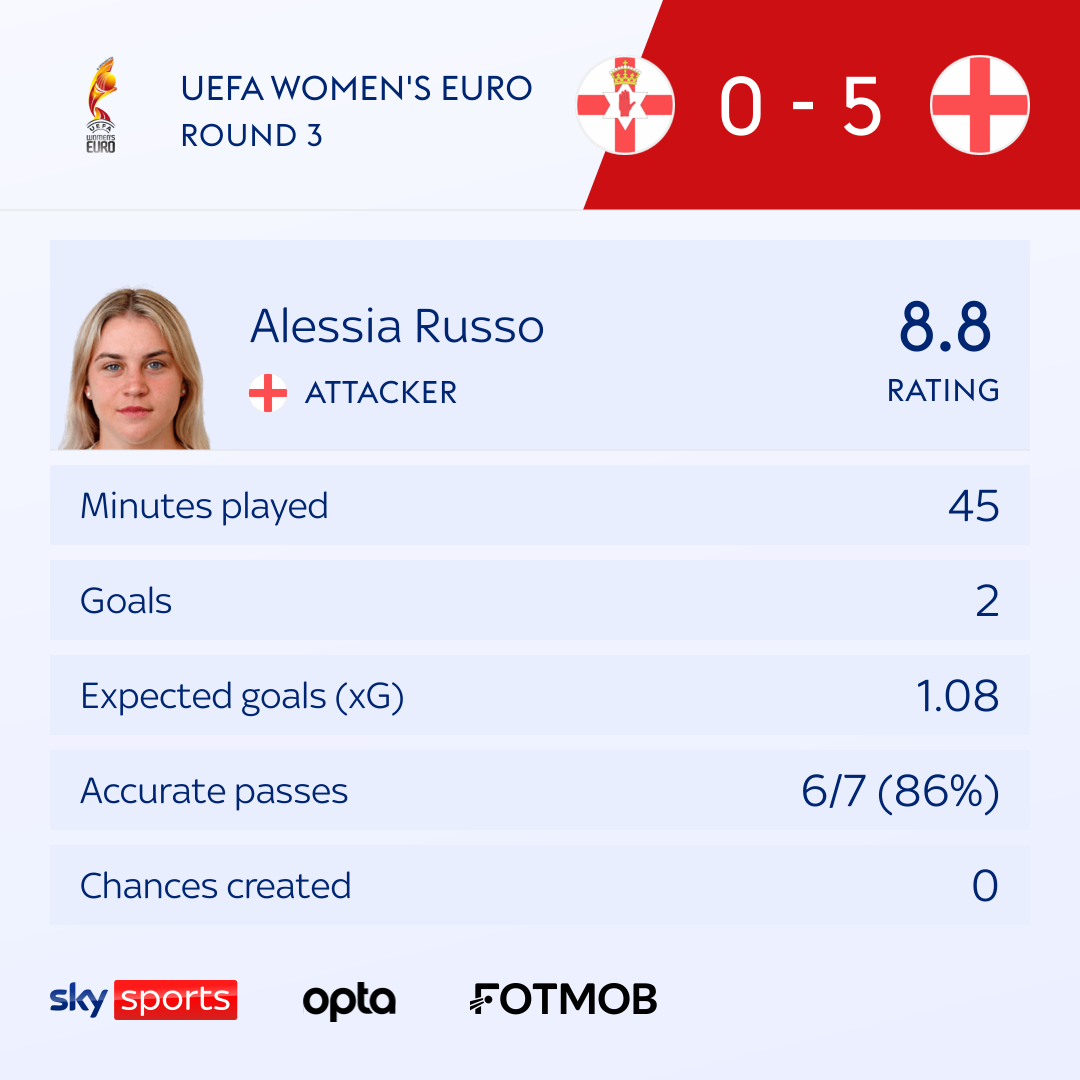 Rather than being the traditional striker that waits in the middle for crosses, as White often does, and while it is not a criticism, Russo is in other areas of the pitch forcing the ball forward. She plays off the other attackers around her and has the finishing to back it up too. Both sets of qualities have been effective for England.

It all begs the questions - should England have the difference of Russo's clearly impactful play from the beginning? Would White be as much of a game changer off the bench as Russo is?

England continue to impress with their strength in depth, starting Russo does reduce a fruitful option from the bench. The striker also offers a tough test for tiring defences - no back line will want to see Russo coming on after an hour. She's a clear danger and threat, which would also be applicable to White in differing ways.

Ultimately, heading into a Euros semi-final, Wiegman will stick with White. She will want tournament experience on the pitch with Russo continuing to be her go-to option from the bench.

And the remainder of that England spine will be undroppable too. They've become the linchpin of England's success and will be vital in beating Sweden on Tuesday evening.

Sky Sports News and Sky Sports' digital platforms will be following every step of England's Euro 2022 journey ahead of Tuesday's semi-final.

On the road, the Sky Sports News Mobile Presentation bus will continue to bring you all the best guests and analysis from the likes of Karen Carney, Sue Smith, Courtney Sweetman-Kirk and Laura Bassett offering their expert insight. The bus will be based in the heart of Sheffield ahead of England's last four fixture, before heading to Wembley for the final.

Across SkySports.com, the Sky Sports App and on social media, we'll have all the big moments covered with our previews, features, reports, analysis, plus the the Sky Sports Women's Euros podcast with Sky Sports' senior football journalist Charlotte Marsh and Sky Sports News reporter Anton Toloui.

As well as England, Sky Sports News and Sky Sports digital will also be covering all the knockout games as we head towards the showpiece final on July 31.