Erik ten Hag has already passed two blockbuster Premier League tests in Liverpool and Arsenal, but the Manchester United manager put it best himself as his side gets ready for the challenge of their fiercest rivals on Sunday afternoon.

"This is the biggest, the whole world will be looking at us," he tells Sky Sports News. "It is a huge event."

If there were still any United fans worried Ten Hag might not fully appreciate the magnitude of the Manchester derby, he sought to ease their fears. "Expect a team that is well-prepared," he says, "a team that has the right spirit and fight to battle the opponent and a team that has only one belief to win that game."

You get the sense he knows what's coming but what about the new signings, Antony and Lisandro Martinez, who have not experienced this fixture? "Don't be worried, they know how big this game is," Ten Hag insists.

"What is good for them is their approach in every game is to battle, to give everything, 100 per cent is not enough and you can be sure that they will bring more on the pitch. But not only them, all the players, they are aware of the importance of this game." 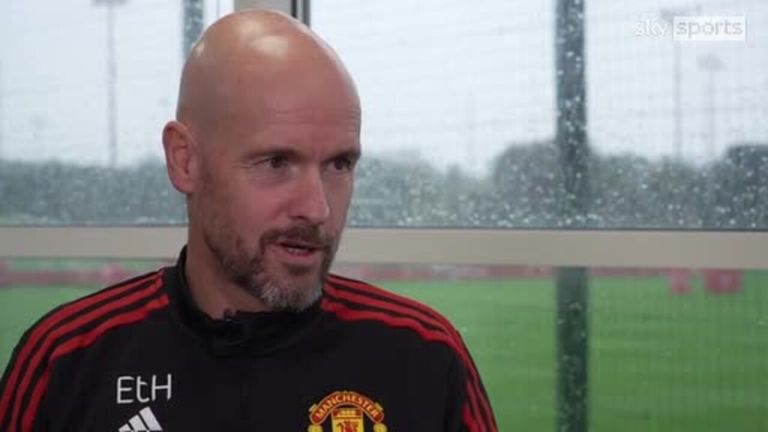 Manchester United manager Erik ten Hag believes that new signings will know how much the Manchester derby means ahead of the match.

This United squad have already shown their resilience. Defeat to Brighton and a thumping by Brentford in their first two games feels a long time ago. Those victories over Liverpool and Arsenal would have seen the confidence surge and instil a belief that United have big-game players. 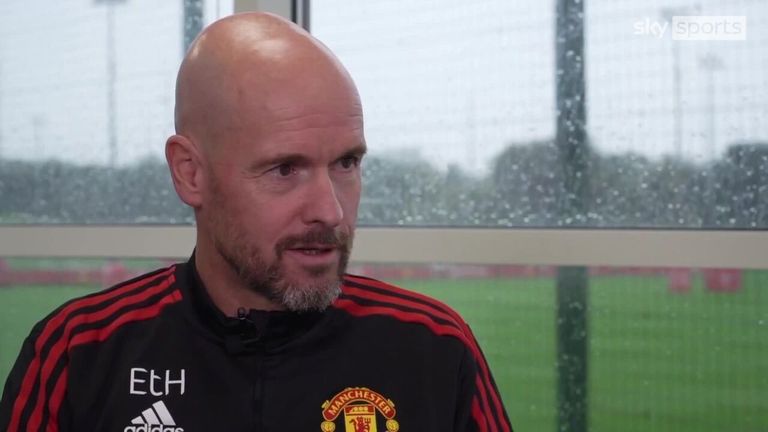 Eleven-goal Erling Haaland - and how to stop him - has been the focus of the build-up, but Ten Hag has his own trick up his sleeve, with Marcus Rashford potentially set to make a timely return from injury.

"It was quite clear from day one he was talented and I'm so excited to work with him," adds Ten Hag. "I knew already before what a huge impact he could have, he has the potential. I know he brings it every game and in every decision on the pitch. I'm really happy with his development and I expect him to keep going. We are quite positive about him playing. We have to wait and see the reaction of training." 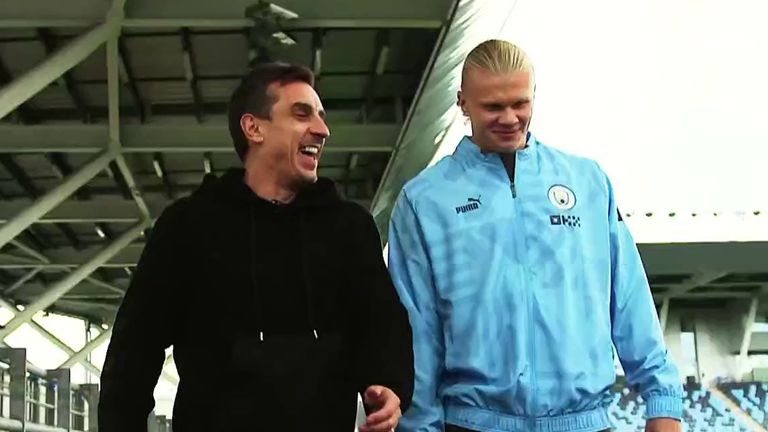 Ahead of the Manchester derby, Erling Haaland has told Gary Neville that he is 'ready' to face Manchester United.

Rashford looks rejuvenated under Ten Hag following his goals against Liverpool and Arsenal and September's Player and Manager of the Month have both enjoyed the process of nurturing his talent.

"I told him I want to see you smiling every day," Ten Hag says of Rashford. "We prepare good training sessions, and then it's up to you to give your best. When you have pleasure, when you enjoy the training, you can give your best, and you will improve and your performance will go up." 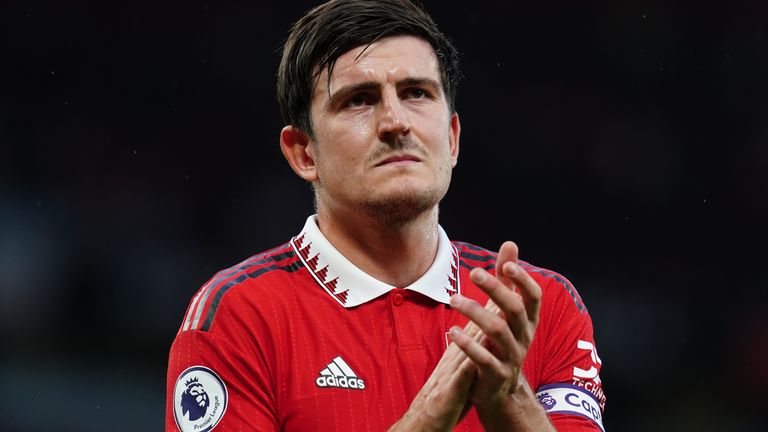 Manchester United manager Erik ten Hag says he backs defender Harry Maguire because he believes in him, despite the criticism he received while playing for England.

While Rashford's injury forced him to miss England's games with Italy and Germany, plenty of his team-mates were scattered around the globe in action for their countries. Ten Hag had plenty to be positive about as he refocused his squad ahead of the club's first Premier League game since the win over Arsenal in September.

The Dutchman was full of praise for Luke Shaw's performance for England and the likes of Diogo Dalot and Bruno Fernandes, who were both on the scoresheet for Portugal. Not for the first time, though, he was also having to field questions on his captain Harry Maguire, who endured another difficult week. 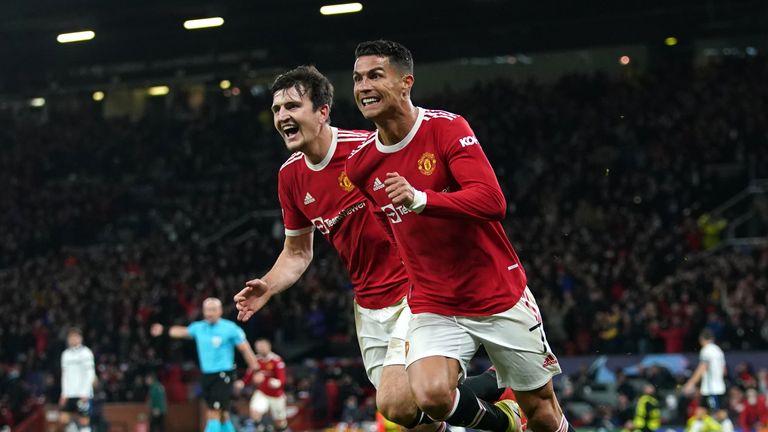 But how can Ten Hag help him?

"By backing him," says the United manager, "I believe in his potential and I tell him I believe in the player and the person. I'm sure he does [still believe in himself]. I'm convinced he will fight back. 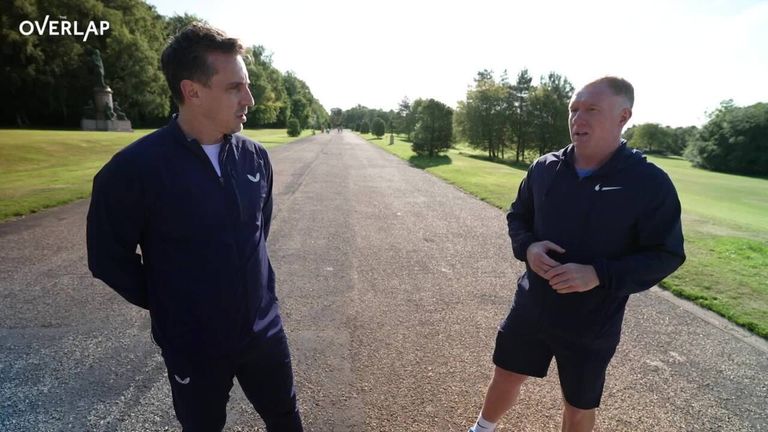 The latest episode of The Overlap sees Gary Neville catch up with former team-mate Paul Scholes, where they discuss all things Manchester United including what has gone wrong and what has gone right.

"He's aware of his great capabilities, and he will return. You know, as a defender when you make one mistake, you get hammered for that mistake. That is top football because there are good opponents and good attackers."

Maguire wasn't the only player who suffered a challenging time away on International duty - there were calls in the Portuguese press for Cristiano Ronaldo to be dropped ahead of the World Cup.

Ronaldo could start his first Premier League game in over seven weeks if Rashford and Anthony Martial fail to pass late fitness tests. But does Ten Hag believe he can deliver on Sunday? "Every confidence," he insists: "Yes, every confidence because of his profile and his personality is and, yes, he can deliver." Eight years on from working alongside Pep Guardiola at Bayern Munich, Ten Hag will be reunited with his mentor on Sunday afternoon. Ten Hag said it was like winning the lottery when the opportunity arose to work with Guardiola.

"I think for my development as a manager, it was really good to be there as the U23 coach," says Ten Hag. "The team in a big club, in a club with a great mentality born out of a good philosophy and of course there was Pep Guardiola driving change in German football, totally.

"In that environment I learned a lot. I'm really grateful for the opportunity he gave me to have a look inside his work. He did great things in football, not only in collecting all the prizes but the way he did it. I really admire that."

They haven't managed to meet up yet, but there is a date in the diary for dinner whatever the result on Sunday. Manchester United manager Erik ten Hag fends off questions about Erling Haaland by saying his side have to prepare for the whole Manchester City team on Sunday.

So much of that will depend on keeping Haaland quiet. The 22-year-old striker is looking for his third consecutive hat-trick at home and is in scintillating form. But Ten Hag and Martinez have masterminded that before when Ajax beat Borussia Dortmund 4-0 away in the Champions League last season.

"I think the approach we took in that game was good. But forget the past, we look to the future," Ten Hag said.

Ajax had over 70 per cent possession that day, and few would expect United to have anything like that at the Etihad Stadium, which is why the duel between his central defender Martinez and Haaland is so fascinating.

Can Martinez do it again on Sunday? "He didn't do it by himself," says Ten Hag." I don't expect that from him, we have to do it as a team." If United are to leave the Etihad with something then Martinez's battle with Haaland is likely to be the one that defines this derby.