Man City 6-3 Man Utd: Erik ten Hag says he did not play Cristiano Ronaldo in derby 'out of respect'

Erling Haaland and Phil Foden scored hat-tricks as Man City thumped Man Utd at the Etihad on Sunday; Cristiano Ronaldo was an unused substitute for the first time this season; United boss Erik ten Hag on why Ronaldo didn't feature: "I didn't bring him on out of respect for his big career"

Erik ten Hag says he did not bring Cristiano Ronaldo off the bench during Manchester United's 6-3 defeat at Manchester City "out of respect".

But former United captain Roy Keane has criticised the club's handling of the Portuguese superstar, declaring they are showing "disrespect" to the striker.

The 37-year-old was an unused substitute for the first time this season as City thumped United at the Etihad on Sunday.

Marcus Rashford's return from a muscle injury saw Ronaldo drop out of United's starting line-up and despite manager Ten Hag making five changes during the game, the five-time Ballon d'Or winner was not one of them. 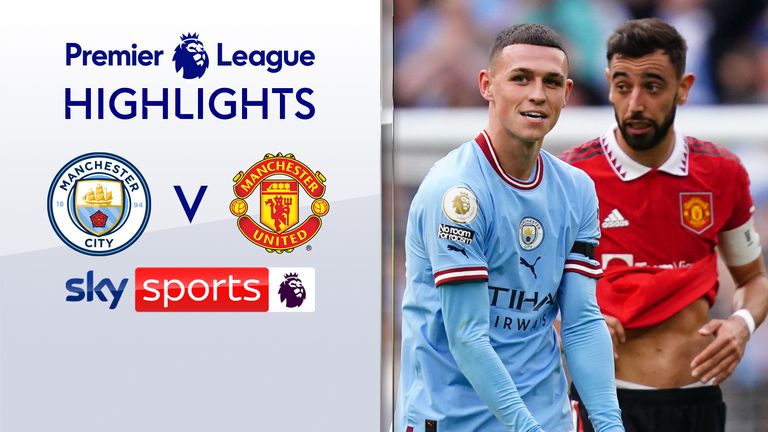 FREE TO WATCH: Highlights of Manchester City's win over Manchester United in the Premier League

Asked why Ronaldo did not feature, Ten Hag revealed he did not want to insult the forward by introducing him with United already 4-0 down.

"I didn't bring him on out of respect for his big career," the Dutchman said at his post-match press conference.

"And the other thing, there was then the advantage I could bring Antony Martial on. He needs the minutes but I don't want to point it out like that."

But an unimpressed Keane, speaking on Sky Sports, countered: "I think United are showing disrespect to Ronaldo. He should have been let go before the transfer window.

"The manager kept him. Okay, he said he wanted options. But you don't keep Ronaldo to sit on the bench. He is one of the greatest players ever. He had options [to move in the summer]. This idea he didn't have options is rubbish. He had four or five good options.

"The big picture is that Ten Hag is not going to play Ronaldo. It is just going to get uglier as the season goes on.

"United have shown nothing but disrespect to Ronaldo." 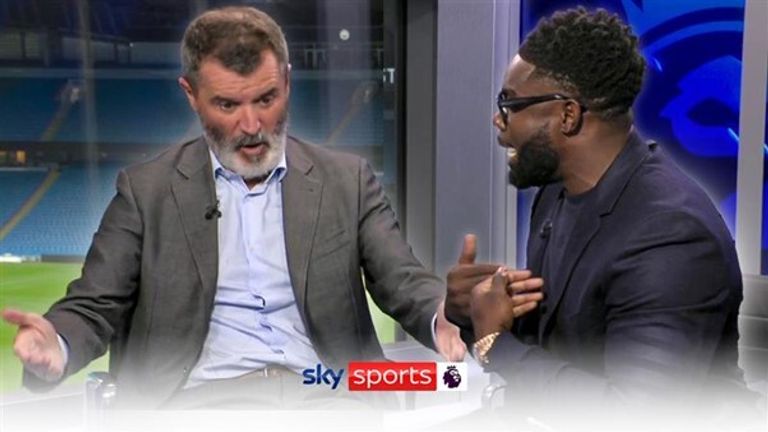 However, Sky Sports pundit and Keane's ex-United team-mate Gary Neville said on Twitter: "I get [Ten Hag's] point to be honest.

"Bringing Ronaldo on at 4-0 and 6-1 would have been an insult. Ten Hag may not have delivered the line correctly and probably would have been best not saying it, but I like his honesty."

Sky Sports pundit Jamie Carragher also added on Twitter: "The idea that [Ten Hag] got it wrong by not playing Ronaldo is laughable!

"Ronaldo played at Brentford when it was 4-0 at half-time! It's not a dig at Ronaldo, but Rashford's pace on the counter-attack as we saw vs Arsenal and Liverpool was 100 per cent the best option." 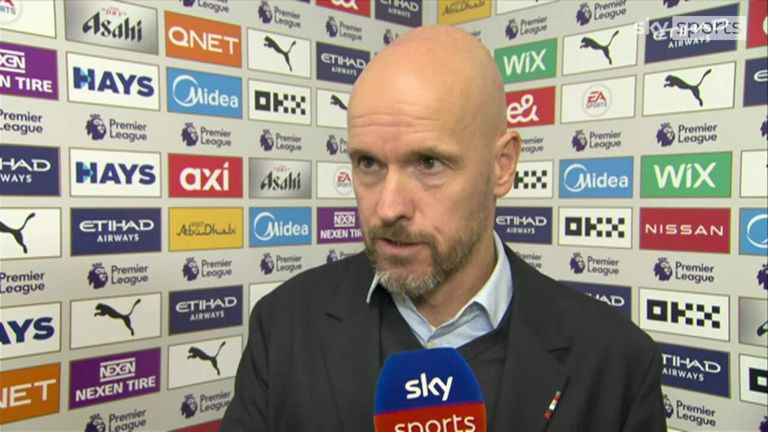 Ten Hag admitted United "lacked belief" in the derby as Erling Haaland and Phil Foden hat-tricks halted any talk of rejuvenation from his side.

United went into the fixture having won their previous four games in the Premier League, but they were abruptly brought back down to earth.

​​​​​Although two late Anthony Martial goals added some respectability to the scoreline, the contest was effectively over as early as the 44th minute as City scored four times in the first half.

Ten Hag told Sky Sports: "We had a lack of belief. I'm surprised why we didn't bring it on the pitch.

"It was four weeks ago, but I had seen a different team with a different spirit and a different vibe. Today, we weren't convincing. From the first minute, we were not on the front foot and we were not brave in possession.

"It's always difficult to find out why that is, especially straight after the game. I will have to talk to my players and find out.

"They know they can do better. You saw the performances against Arsenal and Liverpool but if you don't fight - which we didn't - then you have a problem against a team like Manchester City.

"Once again, it was a lack of belief." 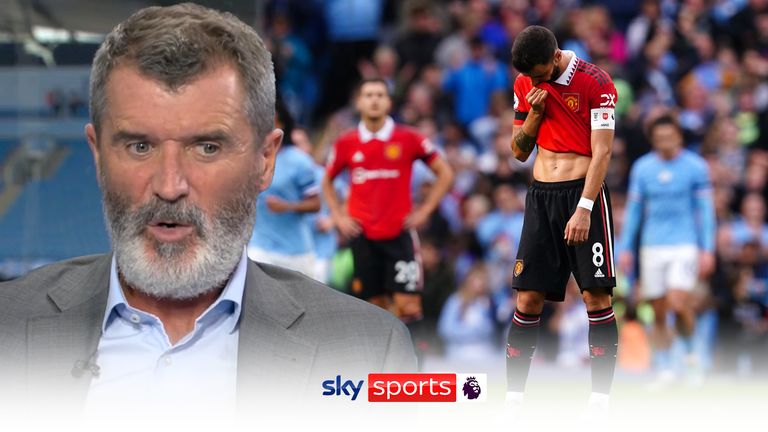 Pep: Some players have to improve

Despite an impressive first-half performance, City manager Pep Guardiola criticised some of his players after the game and said they must be "more consistent".

He told Sky Sports: "It was really good. We scored four goals in the first half and we could have scored more really. They played better in the second half and the last minutes was flat, but it was a good game and everyone in the stadium was happy.

"In the first half we were aggressive and had the space, and the quality of players we had up front made the difference.

"Some players were not good today and have to improve. 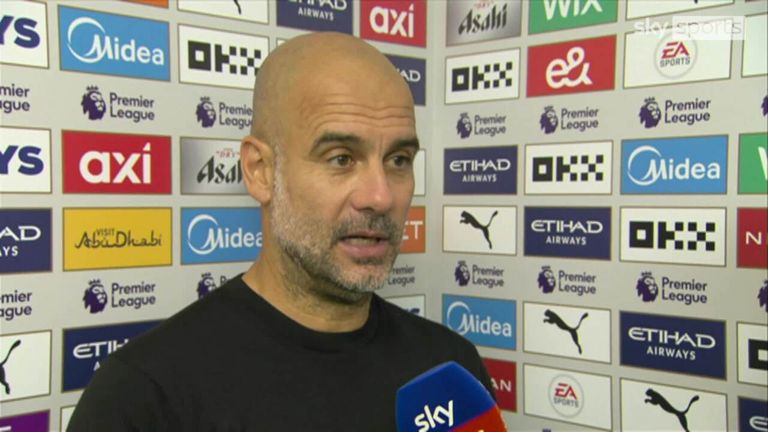 "Perfection doesn't exist, it's impossible. But we have to try to look for it. We have done well today, but we can do better.

"Many, many players made sloppy passes and we lost it and this is not good. We have to be more consistent in our passes.

"In the final third you can have more creativity, you can take more risks, but in some areas, we were not good."

Asked about Haaland, who took his tally to 17 goals in all competitions this season with another devastating hat-trick, Guardiola said: "The numbers speak for themselves.

"What Erling is doing he has done in Norway, in Austria and in Germany, that is the reality.

"Of course, the quality we have alongside him helps him to score goals but, what he has done, I didn't teach him once.

"When the ball is right he attacks the box. How he moves behind the central defender away from the action, he has incredible instincts that the ball will arrive there and it comes from his mum and dad. He was born with that.

"He always looks starving. He is so competitive. We are happy that he scores another goal, the numbers are scary honestly."

The prolific Norwegian bagged his third treble of the campaign and now has 14 Premier League goals in just eight appearances.

The 22-year-old is the first player in the competition's history to score a hat-trick in three consecutive home games.

"I have had incredible forwards in my career," Guardiola added. "What I like in the last period of the game is he is involved.

"I like that he's part of more situations, but don't forget his biggest talent is to put the ball in the net."

Man City host Copenhagen in the Champions League on Wednesday at 8pm, before Man Utd travel to Omonia in the Europa League on Thursday at 5.45pm.

City then host Southampton in the Premier League on Saturday at 3pm, before United travel to Everton on Sunday at 7pm.