In an exclusive interview, Chelsea boss Thomas Tuchel discusses his team's mentality, responds to Louis van Gaal's praise of his tactics, and explains why a morning run is the way to start the day. Watch Chelsea vs Aston Villa live on Sky Sports Premier League on Saturday; kick-off 5.30pm.

"Come on, we can do this." Thomas Tuchel cracks his right fist into the palm of his left hand.

We're sat in the press room at Chelsea's Cobham base and the Blues boss has been in a relaxed mood, following the morning's positive training session ahead of Saturday's Premier League clash with Aston Villa.

But for a moment we're transported back two weeks, into the intensity of the away dressing room at Anfield.

Chelsea had been on the brink of producing what Sky Sports pundit Gary Neville described as the "perfect first half" away to fellow Premier League title hopefuls Liverpool. But a dramatic final few minutes saw Reece James sent off for handball and Mohamed Salah fire in the resulting penalty.

It was 1-1 but Chelsea were facing the prospect of a 45-minute onslaught with 10 men.

Tuchel attempted to stir belief in his team during the interval and, remarkably, they kept Liverpool at bay during that second half. It was a brilliant defensive performance, limiting their increasingly frustrated hosts to few real chances.

The mentality required to produce that kind of display requires confidence, which Chelsea's players have earned through their Champions League win last season, and a special bond, which has built up through the group, says Tuchel.

"Is there any tougher stadium where you can play 45 minutes, one man down? Not sure," he tells Sky Sports as he reflects on the game. "They play towards the Kop in a Premier League match for top place in the league. That was tough. You need to show all your resilience and all your spirit in defending.

"You can only have the confidence if you have the experience together. Nobody talks anybody into this confidence. And we had some fantastic results and experiences together.

"Last season we won at Liverpool. We won at Tottenham. We went through the Champions League in tight matches. And once you have this, you build a very genuine confidence.

If we want to win titles you cannot win without this team spirit, without this glue that is between the players. Maybe you cannot even measure it. But it has to be there. Without it you can't win stuff in football on that level.

Getting the psychology right is a key topic for Tuchel. But it's not just about being fired up in the dressing room at the decisive moment of a big match. Finding ways to switch off and recover in preparation for the next test matters too.

For Tuchel himself, that often involves an early morning run.

"It's about discipline," says the lean German. "It's what you demand from yourself. It's important… and it's quite a challenge for me because I can get lazy and be a person that finds a lot of excuses not to go for a run and not to get out of bed early!

"But it also helps me find my sleep after matches. When everybody was asleep after a late game and I was sure I could not sleep until 2am, 3am because of the emotions, I had to run to sweat it out and then it was easier for me to sleep.

"I try to build routines to get up early and do it everyday, to sweat and to demand it from yourself. It's a certain type of discipline that helps you be more reliable, live more healthy and also be able to recover faster.

"I had for many, many years the impression that if I would do this I'd be asleep the whole morning but it's actually the other way! I feel much, much better when I do it."

Tuchel spoke during his press conference about the impact the past two weeks of international football have had on his team, leaving many of his players tired from long journeys, injured, or, in the case of Thiago Silva, potentially unavailable for more uncommon reasons. But from a personal perspective it is clearly a period he looks to maximise.

As well as those early morning runs, Tuchel was able to welcome his parents over from Germany and spend time with his daughters during the international break.

It also gave him time to catch a widely-shared video clip of Louis van Gaal arguing with a Dutch journalist and fiercely making the case that, despite playing three centre-backs, Chelsea are not a defensive team. "I take my hat off to Mr Tuchel," the Netherlands head coach said during a press conference.

"Somebody sent that to me," Tuchel says, laughing. "It was a pleasure to play against him as a very young coach in Germany when he was coach from Bayern Munich and he has this kind of brutal honesty when you talk to him or when he goes to the press conference, which is what I really love.

"He has really the balls to speak it out, what he thinks. Sometimes it's not to his advantage, but I think right now, it's nice to hear him talk about football. He has a certain age. He has a huge experience. He has influenced football in general with all his clubs, all his teams on such a high level.

"Not just because he defended me in person, which was nice, of course, but in general, he is not afraid to speak out. Sometimes I or other colleagues maybe think 'let's don't speak it out' because we'd just create trouble and we want to protect a calm atmosphere… But he's a nice guy, I like him." 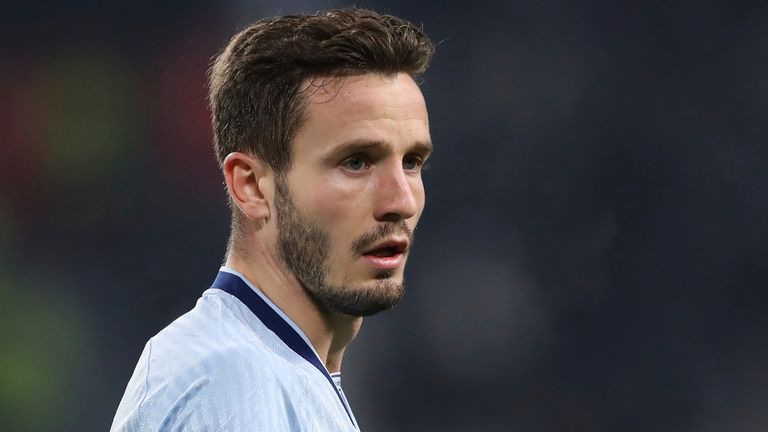 'If a game is active, it's attractive'

So how does Tuchel view his own approach, is he defensive?

"Well, what is defensive and what is offensive? I think you can debate for hours and for weeks and in the end for years," he said.

"For me it's more to stay active. If you take the Champions League final, we had not a lot of possession and of course we had to defend because of the quality of Man City but we never were passive. We never just parked the bus in front of the goal.

"If a game is active, it's attractive. So you need to have answers to all the questions and you have to respect the strengths and strategy of your opponent.

"So what is attacking football? One of the best transition teams was Jurgen Klopp at Dortmund and with Liverpool in the last years. Sometimes they don't have much ball possession, but then you see these fast attacks… and they have these fast attacks because they defended deep before.

"So it's all connected and what I heard from Van Gaal, I was clearly on his side! It's important that it's attractive, that it's active and it's intensive and you can show these attributes in all parts of the game, in the moment where you defend, and also when you attack."

Getting those elements - and the mentality - right will be crucial for Chelsea on Saturday if they're to overcome the quick turnaround from international football to beat Aston Villa.

"For me it's a 'focus' and 'motivation' game," says Tuchel. "We need the same motivation as when we play at Anfield when the whole world is watching.

"Because it's about the same three points. We are tired. I know. And it is not that easy, but in the end, it's only excuses.

"This league does not allow us to make easy mistakes because of a lack of concentration. And this is the challenge for Saturday."