Paul Merson analyses Arsenal's win over Tottenham in the north London derby - how Mikel Arteta was right to drop Pierre-Emerick Aubameyang, why Harry Kane may have to leave Spurs for silverware and questions whether Gareth Bale should have been subbed after 20 minutes

Paul Merson says Tottenham midfielder Erik Lamela's Rabona goal against Arsenal was special, and admits he couldn't have scored it during his own playing career

Alexandre Lacazette turned home a second-half penalty after Martin Odegaard had earlier cancelled out a sublime Rabona finish from Spurs substitute Erik Lamela - who was later sent off for a second bookable offence.

The Super Sunday encounter had plenty of talking points even before kick-off, with Mikel Arteta's decision to drop Aubameyang to the bench for a breach of pre-match protocol.

And despite appearing to be a risky decision which eventually paid off, Merson has nothing but admiration for the Spaniard regardless of the result.

"It was probably the biggest masterstroke of his short managerial career - it was a massive decision to take," Merson told Sky Sports News.

"He's disciplined the biggest star and biggest wage earner at the club, the player who scores the goals.

"Can you imagine sitting in that team meeting and the manager saying, 'you know what, you're not playing because you've just done something wrong', it would have got all the players talking.

"Mikel Arteta would have got so much respect for that decision from the players and win, lose or draw I can't talk highly enough of what he's done.

"It happened with me when I went out the night before a game against Coventry - George Graham took me off at half-time and called me out in front of the players.

"I didn't play again for two months and rightly so and I missed the north London derby on the Monday as well.

"If he had played me that would have sent out a message to other players to do the same and you can't put that seed in other players' minds.

"Nowadays managers have to look after themselves more and just get results but fair play to Arteta, he's looked at young players like Emile Smith Rowe and Bukayo Saka who are the future of the club and sent a message to them that whatever Aubameyang did wasn't right.

"I think it was brilliant management - those kids will go on and be better players just for that decision alone, they will take that on and hopefully realise that they have to do the right things off the pitch as well as on it."

Paul Merson says Tottenham midfielder Erik Lamela's Rabona goal against Arsenal was special, and admits he couldn't have scored it during his own playing career

'Lamela's goal up there with the best'

There wasn't much joy for Spurs who appeared sluggish for large parts in a game which also saw Heung-Min Son go off injured.

However, his replacement Erik Lamela provided a bright spark, and his first involvement saw him take a pass from Lucas Moura and directing a Rabona finish along the ground and into the corner of Bernd Leno's goal.

On the goal, Merson said: "It's up there with some of the best, it was an unbelievable finish.

What is a Rabona?

The Rabona is a method of kicking the football whereby the kicking leg is crossed behind the back of the standing leg.

"The way he has hit it - it hasn't bobbled in, it's drilled into the corner. It was a phenomenal finish.

"Doing the Rabona I think it's called? I've got to get up with the kids - I couldn't do it!

"People practice it in training and end up chipping it because they can't bring their foot around but to be able to drill it like that - it was a special goal.

"I always look at goals and ask whether I would see them on a Sunday morning - I see 40-yarders and people scoring from the half-way line, people beating five players and scoring but I don't see many of them." 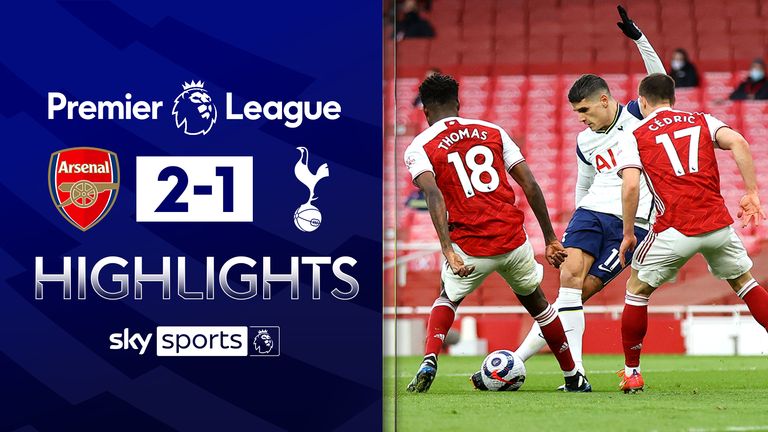 FREE TO WATCH: Highlights from Arsenal's win over Tottenham in the Premier League.

'Bale should have been subbed after 20 minutes'

Despite Tottenham coming into the game on the back of five straight wins in all competitions, it was a disjointed performance lacking in any of the attacking flair witnessed from Jose Mourinho's side in recent weeks.

"When I saw their team and Son, Gareth Bale, Harry Kane and Lucas Moura all playing I thought Arsenal could be in a bit of trouble," Merson said.

"But I was quite shocked by Mourinho to be honest as he's the best at seeing things quickly and changing it but it didn't happen.

"I'd be interested to see if it wasn't Gareth Bale out on the right how quickly another player would have come off because I dread to think how many times Kieran Tierney and Smith Rowe got in behind.

"If it wasn't Gareth Bale I think he would have been off after 20 minutes." 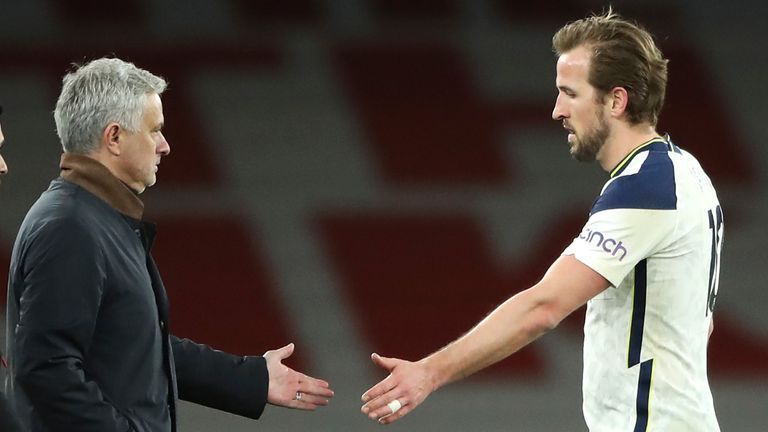 Harry Kane has to make a 'big decision' over his future at Tottenham following their north London derby defeat to Arsenal, according to Paul Merson

Such was Tottenham's poor performance against Arsenal, Merson feels it once again raises the issue of Kane's long-term future at the club with Spurs appearing to struggle to consistently compete for trophies.

"It was another football match where I couldn't see what Tottenham were trying to do and I was quite worried for them," he added.

"But they'll probably turn up next week or the week after and roll someone over and everyone will say they are great and that Harry Kane should stay.

"Ultimately it's a big decision for him - I think he's the best centre forward in the world and I just thought yesterday was another game he would have walked off the pitch and will have thought 'this isn't good enough'.

"I want to see Harry Kane finish his career winning stuff because he's a special player.

"At the end of your career you want to look back at the stuff you have won - Tottenham's a great club and well run but I'm not sure he'll be able to do there."