Arsenal return to the top of the Premier League with riveting 3-2 win over Liverpool; Merson: "They were outstanding"; Gary Neville: "Arsenal are going places"

Arsenal were "outstanding" against Liverpool and just need to keep pace with Manchester City in order to mount an unlikely title challenge, according to Paul Merson.

Gabriel Martinelli scored an early opener for Arsenal before two Bukayo Saka goals sealed Arsenal's return to the Premier League's summit with a statement 3-2 win against Jurgen Klopp's side.

With just under a quarter of the Premier League season gone, Mikel Arteta's young guns now top the table, one point ahead of champions Manchester City, creating a barely-recognisable buzz around the club.

"I thought they were outstanding," Merson said.

"I thought they started really well, got out of the blocks quickly and scored early doors. I thought Arsenal's management of the game [after they scored the third] was phenomenal. Once they were 3-2 up there was never really a threat from Liverpool.

"And you are talking about a very young, inexperienced team at the end there. I was so impressed. they are top of the league, another game gone, they just need to keep on doing what they are doing. I have never seen this place like this [or at least] not for a long, long, time. It's absolutely buzzing.

"As long as they stay on the coat tails of Manchester City, you never know. We've seen Leicester win the Premier League [in the past]." FREE TO WATCH: Highlights from Arsenal's win against Liverpool

After suffering defeat at Manchester United, Arteta's side have bounced back with a win at Brentford and back-to-back defeats of Tottenham and Liverpool at the Emirates.

"This is a good young team, they just need to stay fit," continued Merson. "I honestly thought this was going to be a harder game than the Tottenham game and they have come through it. It's another tick in the box.

"They've come back from the loss to Manchester United and they have bounced back with back-to-back wins. Who knows what could happen?

"They've started really well and there is a long way to go, they have played three big teams, lost to United but have gone and beaten Tottenham and Liverpool so I could not speak highly enough of this team, and it's a young team as well." 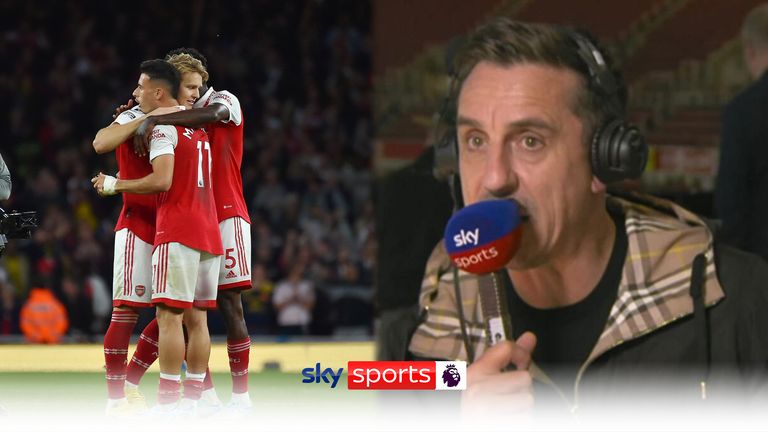 Speaking on the Gary Neville Podcast, Sky Sports' Gary Neville says Mikel Arteta's young Arsenal side are 'going places', but cannot afford to get carried away

Speaking on his podcast, Sky Sports pundit Gary Neville reiterated his prediction Manchester City will win the title but described Arsenal as "going places" as he praised what he felt was a "deserved" win over Liverpool.

"I don't think they will win the league. Man City will win this league by a street by the end. Arsenal are having to go at full pelt to stay with them.

"There are good signs but the tough part of the season is still to come. There is a long way to go and this is definitely not the time to get carried away if you are an Arsenal fan.

"But there is definitely a spirit building and these fans can see a team and manager which is going places."