Gary Neville: Man Utd can take the sting out of Leicester on SNF

Gary Neville says Manchester United can take the sting out of Leicester's pacey attack on Saturday Night Football, but admits a draw would be a good result for both sides.

Top side Leicester host Louis van Gaal's United at the King Power Stadium, with the visitors boasting the best defensive record in the Premier League.

Leicester are unbeaten in six Premier League games, while United have not lost in five, conceding just once in that time, and Neville predicts Saturday's clash will end in a share of the spoils.

He told Sky Sports at the Football Beyond Borders fundraising dinner with Guillem Balague: "I think United will never, and can never, feel safe on Saturday, no matter what the score is.

"Leicester always come back, fight to the end. United had a sobering experience there last year. It's a great game for the neutrals.

Can Leicester keep it up?

Leicester are preparing for a tough run of fixtures, so can they keep up their brilliant form?

"But United are the type of team that can take the sting out of an opposition who want to play quickly.

"I think it'll be a draw. I don't think either team would be disgusted with a draw. Obviously United want to go and win every game, it's the nature of the club, but Saturday is a very difficult game. It's a game that lots of other teams have struggled in."

But up against the in-form Chris Smalling and Daley Blind, Neville sees Vardy pinning himself to the Dutchman in an attempt to beat him with pace. 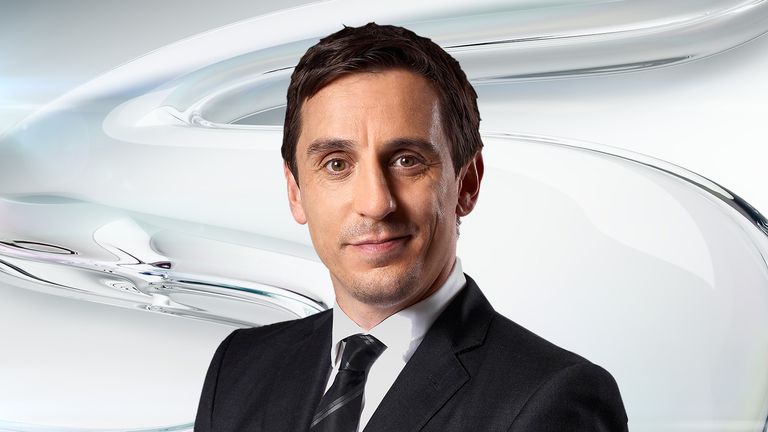 "Vardy versus Smalling, that's one of the biggest clashes on Saturday. I would think that Vardy would try and position himself towards Blind, because he has more pace than him. But Blind is clever, he understands the game.

"From Vardy's point of view he's playing against one of the best defences in the league to try and break the record, so if he does break it he will fully deserve it. It has been an amazing run whatever happens."

No defender has registered more clean sheets than Chris Smalling. But can he keep out in-form Vardy?

With just over a third of an unpredictable Premier League season season gone, the top four are separated by just two points.

And despite Jose Mourinho's Chelsea currently sitting 12 points off fourth place, Neville believes they will still be in a battle with Liverpool and Tottenham for a Champions League qualification spot.

"I think City, Arsenal and United will finish in the top three, and I think it's between Liverpool, Chelsea and Tottenham for fourth, I don't think that's rocket science.

"Chelsea have to really start putting a run together, which we know they're capable of."