"I’d say Greenwood is a better finisher than Marcus Rashford - and that's saying something. He really does look the real deal. The way in which he finishes is that of a top centre-forward."

Gary Neville has labelled Mason Greenwood "the real deal" after he rescued a point for Manchester United against Everton.

With United trailing the Toffees after Victor Lindelof's first-half own goal, Greenwood came off the bench to salvage a draw for Ole Gunnar Solskjaer's side with a clinical finish from the edge of the area.

The 18-year-old's seventh goal of the season fittingly marked the 4000th consecutive game in which United had an academy player in their matchday squad, and Neville believes Greenwood could be among the very best the club has produced.

"I like Greenwood a lot," he told the Gary Neville Podcast. "The composure that he shows at such a young age, his great physical presence.

"The way in which he finishes is that of a top centre-forward. Sometimes when you see a young player in front of goal, they panic a bit and snatch at things - [Daniel] James and [Jesse] Lingard do that quite a lot.

"But I'd say Greenwood is a better finisher than Rashford - and that's saying something. He really does look the real deal. I think Solskjaer knows that and he's going to bleed him in." FREE TO WATCH: Highlights from the 1-1 draw between Manchester United and Everton in the Premier League.

Neville, a member of United's famous Class of '92, believes Greenwood's rise should be celebrated as the latest chapter of the club's rich history of promoting the finest talent into the first team.

"The academy is bedded deep in this football club - Greenwood is obviously another product - and it's something Manchester United should be really proud of.

7 - Mason Greenwood has scored seven goals for @ManUtd in all competitions this season; among teenagers for clubs in the big-five European leagues, only Jadon Sancho (11) and Gabriel Martinelli (8) have more in 2019-20. Talent. #MUNEVE pic.twitter.com/bws1SQnM56

"United have always believed in young players. Even in difficult moments in the last six or seven years. Louis van Gaal, for instance, brought through Rashford and Lingard and believed in them, and then Jose Mourinho showed great faith in Scott McTominay at a time when I wasn't sure he was a midfielder.

"Solskjaer is no different. He has taken it right back and really promoted the youth players. There have been times when I thought are these players being pushed in because of the history rather than them being good enough, but I think they've seen that they are good enough."

Until Greenwood's cameo from the bench, United's inability to break down an Everton side content with defending their lead highlighted a recurring theme for Solskjaer's side - a lack of creativity.

It's an area Neville feels must be addressed in the transfer market to lessen the burden on the group of promising young players at Solskjaer's disposal.

"United still need those transfer windows, they still need those players into the club," he added. "We are still going to see inconsistency. There just isn't that quality, experience, patience; how to navigate a team that plays compact and is soaking up the pressure. 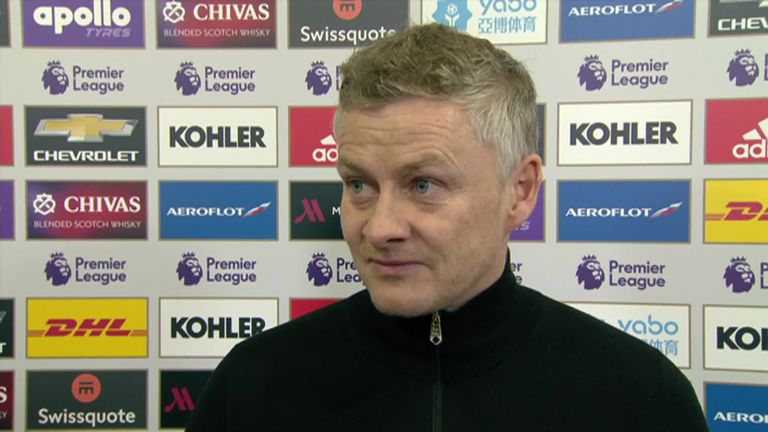 Ole Gunnar Solskjaer says he wasn't surprised by the impact Mason Greenwood made after coming off the bench to score the equaliser against Everton.

"Time and time again this season, when teams just force Manchester United to come forward a little bit, they have a problem - they haven't got the quality to break them down. If a team comes at Manchester United and they can play on the counter-attack, they're devastating.

"They've beaten Tottenham, Manchester City, Chelsea, Leicester - teams that have got real ambition - but they struggle in games where teams sit off them a bit. That just tells you where this team is at. They're still short.

"You saw it with 20 minutes to go against Everton, they needed someone in midfield who could pull the strings, someone up top who could lead the line and bring other players into play. That's something that's desperately missing at the moment.

"Solskjaer himself will want two or three quality players in as quickly as possible so these youngsters can demonstrate their real quality."