Who is David Prutton tipping for victory in the Sky Bet EFL this weekend? Find out here...

Wigan will be delighted to be back on home turf after a couple of tough away trips where they have been so unfortunately denied points late in the day. First at Derby, then at Bristol City.

Swansea got a massive win over their rivals Cardiff on Sunday, which would have been vital to their confidence after such a dip in performances lately. Draw here for me.

Are we seeing the real Brentford now? Three wins on the spin and it looks as though they are on a real upward trajectory.

Huddersfield are as well. They are out of the relegation zone now and seemingly on the up under the Cowley brothers. They will make it tough for Brentford and possibly nick a draw.

There was more frustration for Leeds at Sheffield Wednesday last week, where neither Patrick Bamford in the first half nor Eddie Nketiah in the second could find a route to goal.

QPR are leaky at the back, but also score plenty at the other end. They will take the game to Leeds and I think they could get something at Elland Road. Highlights of the Sky Bet Championship clash between QPR and Brentford.

That was a cracking draw for Charlton at West Brom last week, to nick it so late in the day at the home of the league leaders proved the resolve this side have under Lee Bowyer.

Preston headed into the weekend in the automatic-promotion spots, but the vast majority of their wins have come at home this season. They struggle a little on the road, but have enough about them to get a point on Sunday.

Stoke's owners showed a huge amount of patience with Nathan Jones, but any hopes of a resurgence after a couple of wins was quickly quelled by back-to-back defeats, and it seemed inevitable that he would be shown the door sooner or later.

West Brom's surge has just hit the buffers in the last couple of games as they have been held to draws against sides they really should have beaten at home. But the quality they have should see them past Stoke.

The Portsmouth owners have shown a good amount of faith in Kenny Jackett, with the fans getting increasingly frustrated at their position in the league table.

Oxford are scoring goals for fun and look like they have forgotten how to lose. Midweek was also great for them and they now have a Carabao Cup quarter-final to look forward to. Their confidence should see them through at Fratton Park.

It will be strange for those at the Globe Arena on Saturday to be heading into a home game without Jim Bentley involved for the first time in almost 20 years. What a job he did at that club.

Leyton Orient will be pleased with anything approaching consolidation this season, and the more space they can put between themselves and the relegation battle the better. I reckon this will be a draw. 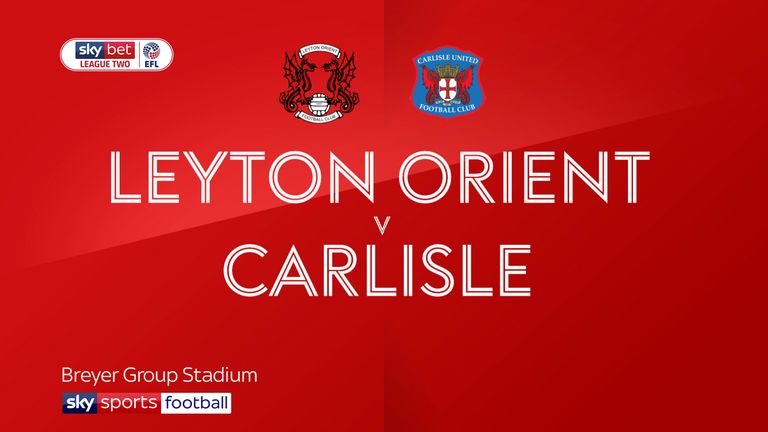 Highlights of the Sky Bet League Two match between Leyton Orient and Carlisle.