Celtic will be without Jota and Carl Starfelt for their Champions League clash with Shakhtar Donetsk; they need to beat the Ukrainian side to have a chance of dropping into the Europa League; Celtic are bottom of Group F with one point 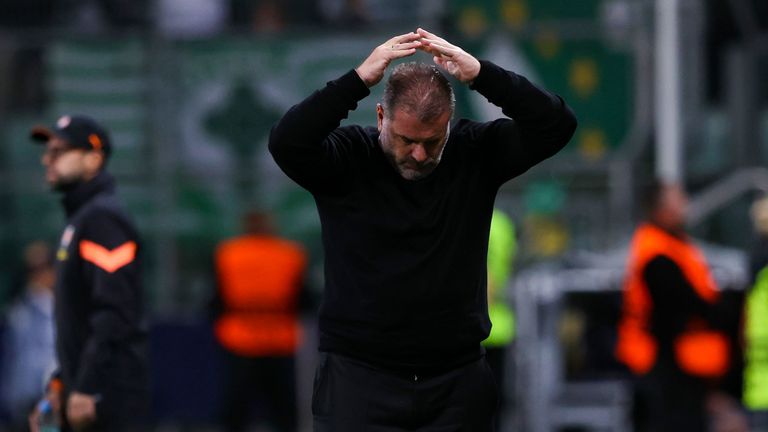 Celtic will be without winger Jota for their "must win" Champions League clash with Shakhtar Donetsk with their penultimate Group F match also coming too soon for defender Carl Starfelt.

Jota, who has been named in Portugal's provisional 55-man World Cup squad, has not featured since an injury against St Johnstone but is expected to be available for Sunday's Scottish Premiership match at Livingston, live on Sky Sports.

"Jota had his last rehab session and is expected to start training with us again after the game and be available again for the weekend," he said.

Celtic are already out of the Champions League and need to pick up their first win of the tournament against the Ukrainian side if they are to have a chance of Europa League football.

They trail their opponents by four points and even a win would leave them needing to take something from their final fixture, away to holders Real Madrid.

"In the context of us continuing in Europe, it's a must-win game and our ambition is to try and achieve that and keep us alive. It's not that because I think we deserve something you automatically get it or you feel like you're owed something," the Australian added.

"My thought process around this whole thing is that if you keep putting yourself in that position of creating chances then eventually you get your rewards and that's the key for us.

"We have to tackle it in the same manner, particularly here at home, put pressure on the opposition and if we create the same number of chances then it's about converting them. From my perspective, it's a lot better being in that sort of situation rather than trying to figure out how to create chances to try and score goals.

"European football in general we found last season in the Europa League the physical demands are greater than the Premiership because for the most part of Premiership games even though we try and play high tempo we have a lot of control of the games, which means we're not doing too much running back towards our goal.

"But you're playing against better opposition and it's more of a challenge for us to maintain that tempo when you don't have the ball. But within that context I think physically, in all the games, we've performed really well but the difficulty then is recovery and back up for your next game when they're so close together."