Report and free match highlights as a first-half strike from Emmanuel Dennis and two from Ismaila Sarr hand Watford their second Premier League win of the season; Norwich remain bottom of the table without a point

FREE TO WATCH: Highlights from Watford's win over Norwich

Norwich's search for their first Premier League win of the season continues after they fell to a 3-1 defeat to Watford at Carrow Road.

Teemu Pukki cancelled out Emmanuel Dennis' opener in the first half, but Ismaila Sarr sealed Watford's second Premier League win of the season with a close-range finish shortly after the hour mark and another in the 82nd minute.

Norwich have now lost each of their last 15 Premier League games under Daniel Farke, which is the longest losing run by any side in English top-flight history.

The result moves Watford up into 10th on six points. Norwich remain in 20th without a point.

Man of the match: Ismaila Sarr

How Watford added to Norwich's misery

Norwich began the contest well, but they were punished for leaving space down the flanks. Kiko Femenia's delightful cross was met by Dennis, who snuck in between Grant Hanley and Ozan Kabak to thump in a header in the 17th minute.

Norwich responded brightly and grabbed an equaliser ten minutes before the break. Mathias Normann's dangerous through ball found Pukki, who peeled off the shoulder to slot home his first Premier League goal from open play since December 2019.

Daniel Farke made five changes to his team that lost 1-0 to Arsenal last Saturday.

Ozan Kabak and Mathias Normann made their Premier League debuts for Norwich. Billy Gilmour returned to the starting lineup while Josh Sargent and Milot Rashica started in a front three alongside Teemu Pukki.

Xisco Munoz made four changes to the Watford team that lost 2-0 to Wolves last weekend.

Ben Foster was handed his first Premier League start of the season in place of Daniel Bachmann in goal, while Kiko Femenia, Craig Cathcart and Tom Cleverley all came in.

With the game increasingly opening up as the half wore on, Pukki squandered a great chance to put Norwich ahead just before the break. He was teed up inside the area by a combative Josh Sargent, but the Finn fired his first-time effort over the bar.

Norwich came out of the traps quickly after the break, but again were punished for leaving too much space in behind. In the 63rd minute, King cut the ball back for Sarr at the near post to slot into the net for his second Premier League goal this campaign.

Ben Foster was forced into making two good saves to deny Kenny McLean and Milot Rashica with 15 minutes left to play, but Norwich failed to really threaten any further and Watford went on to extend their lead.

Sarr tapped in a rebounded effort from Josh King, who was deemed onside after a VAR review, eight minutes from time to ensure Norwich would have to come to terms with yet another defeat.

Norwich manager Daniel Farke: "It's not time to feel sorry for yourself. It's time to roll your sleeves up and work on it individually and as a team on the training pitch.

"We have to improve defensively because we have conceded too many goals so far. A change of formation also perhaps helps.

"Offensively we worked quite well but a goal against you almost kills your momentum, but in the second half I felt we were the better side. If you allow the opponent a cheap lead it kills the momentum of the game and we have to improve." 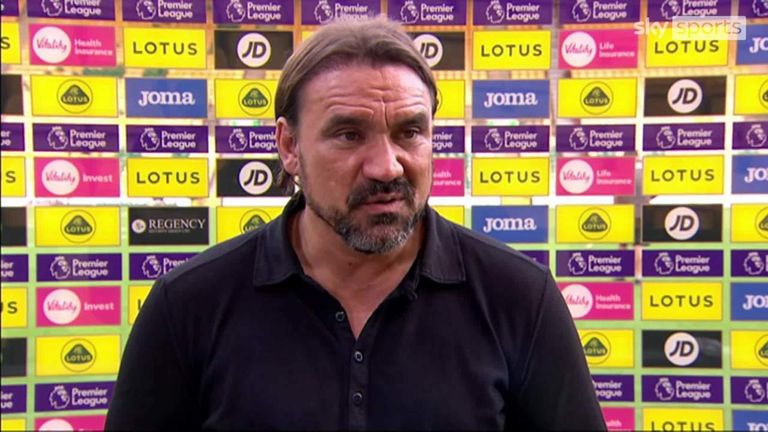 Daniel Farke claimed his side made too many mistakes in the 3-1 home defeat to Watford.

"For me it was a mature performance and the team is getting used to this level. But we need to work very hard to keep up this level." 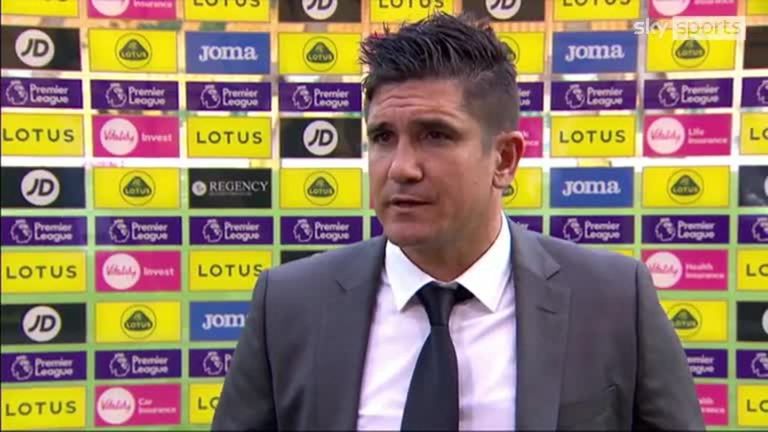 "It's bittersweet," Norwich forward Josh Sargent said after making his first Premier League start. "I'm very happy to make my debut. The team is frustrated, the fans are frustrated, we wanted to get the points. Very disappointed.

"It is what it is, we can't lose focus, we can't give up at all. We've got to be focused and get the points we need."

Foster: It's a new team

"For the team today it was a huge win," Watford goalkeeper Ben Foster said after making his first Premier League start of the season. "We picked ourselves up really well today.

"It's a new team, there's been a turn around, its inevitable in football and I think some of the players we've brought in Danny Rose, Moussa Sissoko. Real good, experienced players."

Norwich face Liverpool in the EFL Cup third round on Tuesday evening at 7.45pm, while Watford host Stoke City at the same time.