Match report and highlights as Nottingham Forest move up to 18th in the Premier League with a 1-0 win over Crystal Palace at the City Ground; Eagles drop to 11th after Morgan Gibbs-White's second-half winner; Wilfried Zaha scuffed dreadful penalty wide shortly before half-time 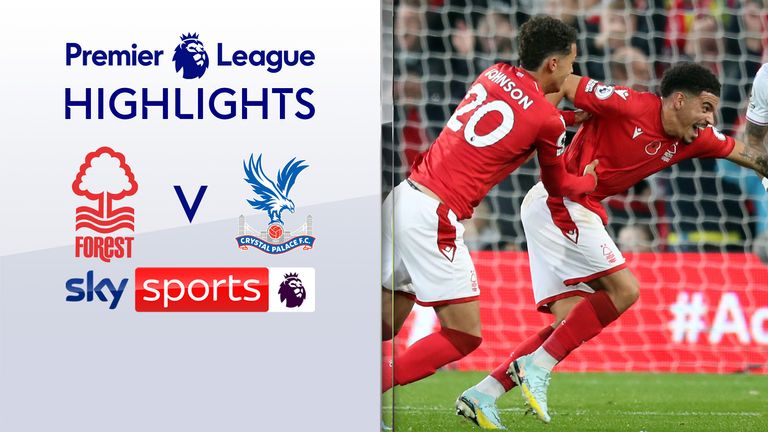 FREE TO WATCH: Highlights of Nottingham Forest against Crystal Palace in the Premier League

Nottingham Forest moved off the bottom of the Premier League table after Morgan Gibbs-White's second-half goal earned them a 1-0 win over Crystal Palace.

The visitors had the better of the opening 45 minutes and should have taken the lead shortly before half-time when Wilfried Zaha was hauled down in the area by Joe Worrall, but the Palace forward dragged the resulting penalty wide.

It turned out to be the only notable chance the Eagles created at the City Ground and they were outplayed by an improved Forest side in the second half, with the hosts grabbing a deserved winner when Gibbs-White turned in a rebound after Vicente Guaita denied Brennan Johnson.

Patrick Vieira tweaked his formation and threw on extra strikers but his side still failed to create a chance as they slipped to a meek defeat that leaves them 11th in the table, while Forest have risen to 18th and are just one point from safety.

Man of the match: Morgan Gibbs-White

Zaha's six goals and two assists in the Premier League this season have been worth 11 points for Palace, meaning only Erling Haaland (14) has earned more points for his side in the 2022/23 campaign.

Zaha has spent the best part of a decade fulfilling the role of Palace's talisman, but his below-par performance embodied the tame manner in which the south Londoners entered the World Cup break.

The Ivory Coast international marked his 30th birthday this week, but he entered his fourth decade in the worst way possible when he blew his chance to open the scoring for Palace from the penalty spot.

Things went from bad to worse for Vieira's side when Gibbs-White scored following a VAR check after originally being flagged for offside but, despite having more than 30 minutes to respond, ended the game with a non-penalty expected-goals total of just 0.33.

Even though they had less than a third of possession, it was Forest who conjured the majority of the chances, with Jesse Lingard just failing to turn Brennan Johnson's low shot into the goal and bending an effort wide when well-placed.

Forest's win means they are undefeated in five matches at the City Ground - a run that stretches back to September 16 - while Palace failed to take advantage of their chance to win three consecutive Premier League matches for the first time since June 2020. 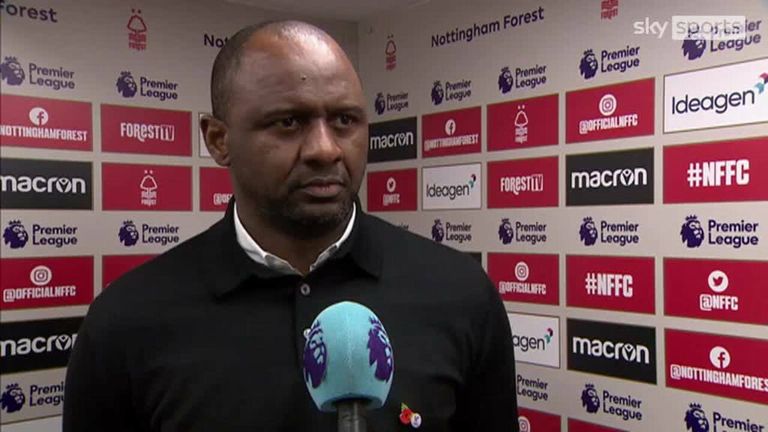 Patrick Vieira bemoaned Palace's performance at Forest, saying: "The game reflects our season so far. We had a good first half, we had the penalty, we had a couple of situations to take advantage but we didn't.

"We came back in the second half and slowly we lost our discipline. They started to believe they could win the game and defended well. We conceded the goal and after that it was really difficult to create chances."

"There's still a lot of work to be done to improve, be more consistent and win those games when the opportunity is there.

"We have to be clear about who we are as a football club and how we want to play the game."

The manager also revealed he is targeting new players in January, saying: "We want to improve. We want to bring those couple of players that will allow us to compete more.

"We have to [make January signings]. It's too early to talk about it but we have to improve our squad."

Forest's concerning start to the season after signing an extraordinary 23 players in the summer led to fears over Steve Cooper's future, despite the manager hauling them off the bottom of the Championship and into the Premier League via the play-offs in a matter of months.

But the club displayed a rare show of faith in their under-fire manager by awarding him a new contract in the wake of their 4-0 defeat at Leicester.

While it would be a stretch to say Forest's form has drastically improved since that dispiriting night at the King Power Stadium on October 3, there's no doubt things have picked up for the East Midlanders.

Their upturn in form has not only coincided with Cooper's new deal but also the decision by the manager to ditch his three-at-the-back formation in favour of a four-man defence.

Forest are unbeaten at the City Ground since the Welshman tweaked his tactics and have lost just two of the eight matches they have played since the defeat at Leicester.

Forest may remain in the relegation zone as the Premier League pauses for the World Cup but, thanks to home wins over Liverpool, Tottenham and now Palace in the last few weeks, Cooper and his players have started to turn around a season that threatened to be spiralling out of control.

Cooper: The best team we won 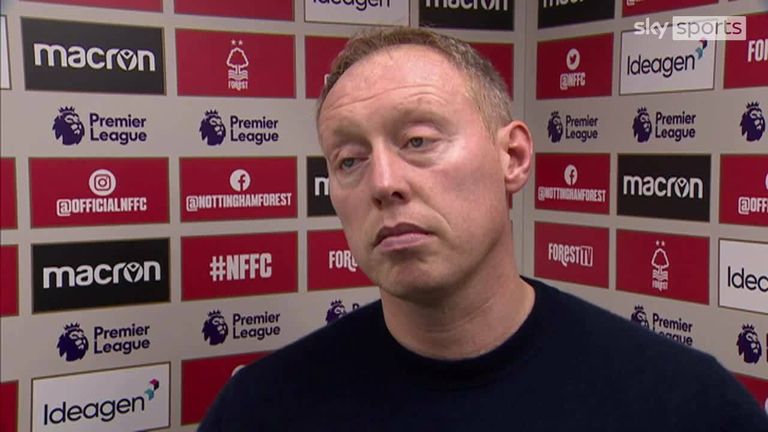 Steve Cooper praised the way his players have recovered after a disappointing start to the season, adding they deserved to see off Palace.

"We're really pleased - great to win going into the winter break," he said. "We've had a really good week. We got let down last week against Brentford with some of the decisions that went against us, so for the players to respond as they did with the performance and result against Spurs, and the same today, is really pleasing.

"The players deserve it - I think we were good for the win. I know we rode our luck on the penalty but I can't remember Dean [Henderson] making another save, and we've had some real good chances. No doubt the best team won and it's an important win.

"It's been a tough few months with the turnaround in the squad but these guys have been brilliant in terms of their attitude. We know at times we haven't been the team we need to be but that's a natural process of putting the team together."