Tottenham threw away a two-goal lead as they opened up their Champions League campaign with a 2-2 draw against Olympiakos.

After playing with plenty of fizz against Crystal Palace on Saturday, Spurs were flat throughout in Greece and fortunate to be two goals up through a Harry Kane penalty (26) and a fine Lucas Moura strike (30).

Olympiakos - full of tenacity - got one back before the break when Daniel Podence finished clinically (44) and drew level when a catalogue of Spurs errors led to Mathieu Valbuena netting from the penalty spot (54).

In last season's competition, Mauricio Pochettino's side recovered from taking one point from their first three games to finish second in their group and this early slip up could make qualification tricky once again with Bayern Munich and Crvena Zvezda to come.

Olympiakos came into this clash unbeaten in their last 17 matches in all competitions and backed by a boisterous home crowd, the Greeks bossed the opening period.

Tottenham selected Davinson Sanchez at right-back while Son Heung-min was on the bench as Maurico Pochettino made four changes. Dele Alli and Tanguy Ndombele both were handed starts.

Podence had already tested Hugo Lloris when he struck the post on 18 minutes after a quick attack left Spurs seeing stars. It was a fine effort from a tight angle but luck wasn't on his side as the ball rebounded back into play before Guilherme's effort sailed over the crossbar.

Spurs were non-existent as an attacking unit, until Kane slalomed his way into the penalty area on 26 minutes and was tripped by Yassine Meriah. The England skipper - who missed his last spot kick for his country against Kosovo - dispatched the penalty into the roof of the net.

That goal sparked the visitors into life and Moura doubled their advantage four minutes later.

After breaking up Olympiakos' play down the left, Moura found space to hammer home a thumping effort into the top corner.

A team with Tottenham's experience should be capable of seeing out a two-goal advantage but they offered Olympiakos a way back into the match just before the break.

Podence and Valbuena - the best players on the pitch - combined to devastating effect and Podence drilled a clever finish into the corner.

The hosts continued to show more intensity than Spurs and were awarded a penalty on 53 minutes.

Christian Eriksen - ponderous throughout - failed to clear his lines after a spell of pressure which allowed Valbuena to receive the ball inside the area and Jan Vertonghen carelessly tripped him from behind. Valbuena stroked home from the spot.

Olympiakos were happy with their lot from that moment on which gave Spurs a platform to dominate the ball for the final quarter, although their quality was lacking.

Erik Lamela decided to shoot from a tight angle instead of squaring to Kane in the final stages as Spurs' frustrations were clear to see.

It was hard to rate any Tottenham player over a six, bar Kane. The game's clear standout player was the Portuguese attacker who gave Ben Davies a torrid time with his tricky movement and speedy transitions. His link up play with the equally brilliant Valbuena caught the eye - chemistry that Tottenham couldn't match with their forward play. Podence had three on shots on target in the game, hit the post, scored a deserving goal and made three key passes to his team-mates.

"I feel very disappointed. To be honest, first half I wasn't happy with our performance. From the beginning we had a plan. We didn't respect the plan. I told the players at half-time. We scored two goals but if you only analyse the performance it wasn't great. We conceded a lot of chances to them and the first goal was so painful. We didn't translate that type of aggression these type of games demand." 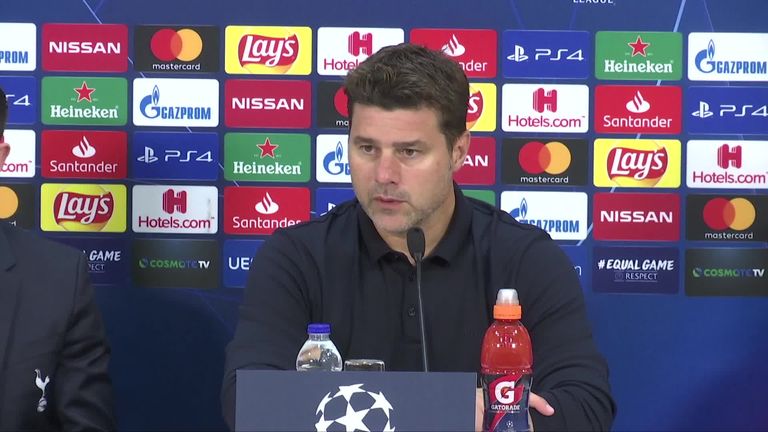 Tottenham manager Mauricio Pochettino admits his team didn't show the right levels of intensity, aggression and focus as they drew 2-2 with Olympiakos in Greece

'Eriksen had a mare'

Former Premier League striker Clinton Morrison was watching the game for Sky Sports News: "I love Christian Eriksen as a player, and all players have bad days, but he's had an absolute nightmare of a game. He even struggled with the simple passes.

"Eriksen had the worst game I've seen him have in a Tottenham shirt. He was at fault for the second Olympiakos goal, dilly dallying on the ball. He put Spurs under pressure trying to play out from the back and then Vertonghen fouled Valbuena.

"In a game like this you might as well had just taken him off, it's just wasn't happening for him."

All 3⃣ of @SpursOfficial's away games this season have finished 2-2. They have had a total of 2⃣5⃣ attempts on goal in those 3 games, and faced 7⃣2⃣ shots.

'A difficult night for Spurs'

"I think it is a difficult place to go. In the first game of a European campaign away from home a point is always a good result. Now, the mindset changes when you've been two goals up because you think you must've done something wrong, but that game was difficult for Spurs even before they went two goals up.

"They conceded chances and they got lucky with the one that hit the post. They could've easily been a goal down so overall, I think Pochettino will be reasonably pleased.

"But you have to, as a footballer, have a little bit of disappointment within you when you've lost a two-goal lead because you pride yourself on being able to keep leads."

Spurs are back in action on Saturday lunchtime with a trip to Leicester in the Premier League, kick-off at 12.30pm. Their next Champions League fixture is a home match against Bayern Munich on Tuesday, October 1.