Poland vs England: Three Lions head to Warsaw with Group I 'incentive' - but Gareth Southgate warns against complacency

England out to extend 100 per record in Warsaw to close in on 2022 World Cup finals; Will Gareth Southgate restore big guns? Follow Poland vs England with our live blog on the Sky Sports website and app and watch free match highlights shortly after full-time

England travel to Poland on Wednesday to face their nearest challengers in World Cup qualifying and victory would put Qatar firmly in sight.

England sit top of Group I at the halfway stage, having maintained their 100 per cent record with an impressive 4-0 win in Hungary, before seeing off Andorra by the same scoreline at Wembley in what ultimately proved a comfortable victory.

A trip to Warsaw would appear the last big hurdle and manager Gareth Southgate has acknowledged that a sixth straight win of the campaign would likely see his side secure serene progress to next year's finals.

"Clearly with the result that Hungary have ended up with (losing 1-0 to Albania), Poland look like being the nearest challengers, which we probably thought when this group was drawn," Southgate said ahead of the game.

"It's a great incentive for us now. If we can go to Warsaw and win then we really are in control of the group."

Speaking at his official pre-match news conference, the England manager reiterated that his side was in "a good moment" but while emphasising his squad's motivation, also warned against complacency.

"We have a squad of players, any of whom are more than comfortable to play and are playing well," he said.

"But also those moments are dangerous because, if we get any sense of complacency, we are going into a game that will be a challenge.

"It is a high level of motivation but also guarding against a feeling we are better than we are. We are getting a good set of results because we are working hard for each other.

"The challenge of Poland will be different. We can't drift on the night."

When can England qualify for World Cup?

Southgate's side are currently five points clear at the top of the table.

Victory on Wednesday would extend England's advantage over Poland to eight points and - assuming Albania were to win at home to San Marino - mean a six-point lead at the top.

With four games to go, England could assure their place at the World Cup with wins away to Andorra and at home to Hungary next month if Poland take points off Albania.

'More to Poland than Lewandowski' 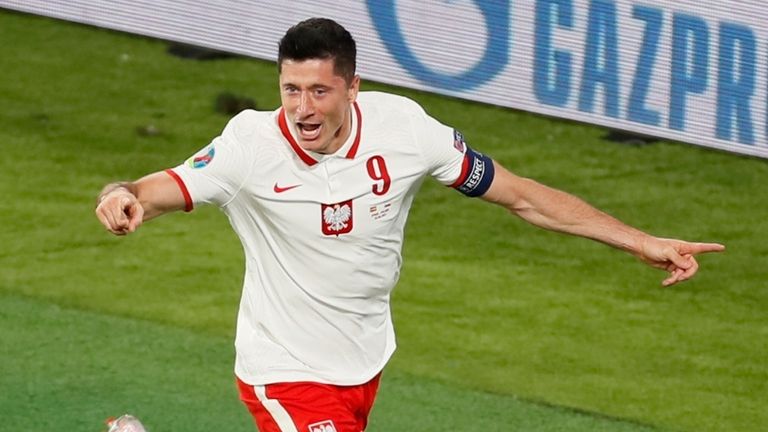 England defender Harry Maguire secured a late 2-1 win against Poland in March, when the visitors were without star striker Robert Lewandowski through injury.

Lewandowski scored twice in Poland's 7-1 thrashing of San Marino last time out but his second-half replacement, Adam Buksa, went on to net a hat-trick.

"When we're preparing the team to play against Poland, we're not just looking at Lewandowski," Southgate said.

"We absolutely respect what he brings and we know what a threat he is, but they've got some other very dangerous players as well." 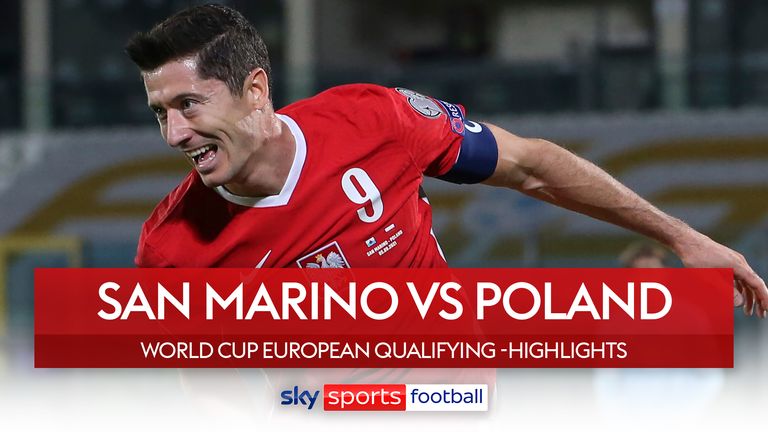 Highlights of the World Cup qualifying match between San Marino and Poland.

Southgate believes ball retention is likely to be key.

"We know keeping possession of the ball can be a big factor in managing those situations," he added.

"But the flow of the game will be different and we are playing a level of opponent who I think is in a better moment [than previous opposition].

"They have won their last two games and have better footballers in the team who will keep the ball a little bit better than Hungary were able to against us."

Southgate fully rotated his England XI for Sunday's fixture against Andorra, with Patrick Bamford handed a debut up front, Sam Johnstone getting the nod in goal, and Trent Alexander-Arnold playing in midfield, before reverting to full-back, where Southgate admitted he "looked happier".

But he insisted it was not a straightforward decision to revert back to the side which won so convincingly in Hungary, saying: "There is still huge competition for places in this group."

The likes of Harry Kane, Raheem Sterling and Jack Grealish should still return but Jadon Sancho left the camp before the Andorra game after picking up a knock and Tyrone Mings is suspended and so will not travel.

Harry Kane's late penalty against Andorra was his 40th England goal, drawing him level with Michael Owen in the all-time leading goalscorer charts for the Three Lions. A goal against Poland would move Kane into outright fifth place, with Jimmy Greaves (44) next ahead of him.

Jan Bednarek, Kamil Glik, Grzegorz Krychowiak and Derby's Kamil Jozwiak are among those likely to be restored to Sousa's XI.

Thirteen European nations will compete at the Qatar World Cup, which will be played in November and December of 2022 to avoid the punishing summer heat in the Middle East.

The winners of the 10 groups will qualify automatically for the finals.

A further three places will be fought out between the 10 group runners-up and the two highest-ranked teams from the Nations League who have not already qualified or finished in a runners-up spot.

These 12 teams will be divided into three play-off paths, each featuring four countries, to determine the final three European berths. The format will consist of two knockout rounds in March 2022, from which the three additional teams qualify.