Report and highlights from the Sky Bet Championship clash between Preston and Peterborough at Deepdale as Patrick Bauer's goal earned North End a first win and their first points of the season on Saturday. 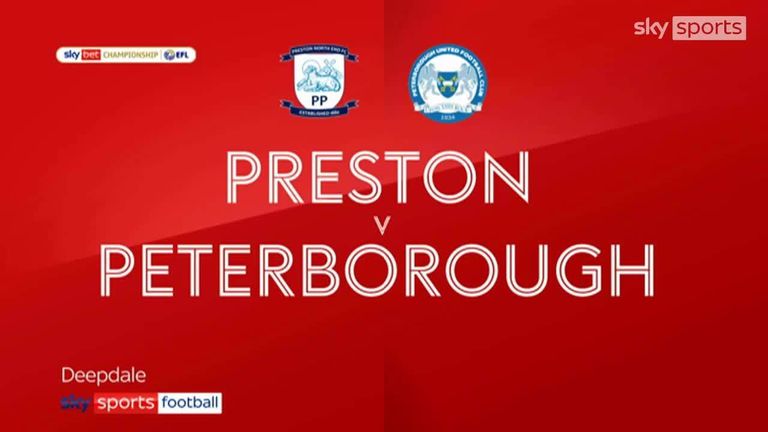 Highlights of the Championship match between Preston and Peterborough.

Preston produced a timely response to their difficult start to the Championship season with a scrappy 1-0 win over Peterborough at Deepdale.

The Lilywhites had lost their first three league games of the campaign heading into the weekend, but a battling performance from Frankie McAvoy's side secured all three points in Lancashire.

Preston created a string of chances to kill off the game after the break, but Patrick Bauer's early goal proved enough to condemn Darren Ferguson's side to a first defeat since the opening weekend of the season.

Neither side were able to create much in attack amid rainy conditions in the early stages before Bauer's firm header edged the hosts in front after 14 minutes.

Ryan Ledson's whipped free-kick from the left exposed some poor Peterborough set-piece marking around the penalty spot and Bauer got up above his man to power a finish past Christy Pym.

That key breakthrough handed the home side the initiative and a vital confidence boost as they pushed hard for a second goal before the break.

Daniel Johnson's curled effort from 25 yards drifted just wide before the Jamaican international's dipping cross was flicked on to the top of the crossbar by a stretching Ben Whiteman after 34 minutes.

Despite struggling to threaten in the opening 45 minutes, Peterborough almost produced an instant equaliser immediately after the restart.

That frantic start to the second period set the tone for the closing stages as both sides pushed forward.

Scott Sinclair's driving run took him clear of two Peterborough challenges on the edge of the area, but Pym's sharp reactions kept out the former Celtic star, with Whiteman hammering narrowly wide from the rebound after 57 minutes.

Peterborough responded as Jonson Clarke-Harris' snapshot was beaten away by Daniel Iversen as the Preston defence was caught out.

Despite Peterborough's occasional threat on the break in the final half-hour, it was McAvoy's under-pressure side that looked more likely to find the next goal.

Pym was again called into vital action to tip over Hughes' towering header after Bauer's knockdown at a corner before the overworked keeper produced a diving save to deny Danish winger Emil Riis Jakobsen.

But one goal proved enough for Preston to pick up their first home win since May 1.

Preston's Frankie McAvoy: "We said before the game we need to stand up and be counted in this one. Our destiny was in our own hands, we had to take the game to Peterborough and we did that. Offensively I thought we did well. I think we had 16 attempts with seven on target, but we only got one goal, but I can't be too critical of that as we got the result. The main part to look at moving forward is making sure we take more of the chances.

"I'm delighted for Patrick Bauer to get back playing and score. I told him not to put too much pressure on himself and just go and be the Patrick Bauer we know he can be and he was brilliant. One-nilis always difficult to manage and Peterborough kept coming at us, but I'm delighted for everyone that we picked up the three points."

Peterborough's Darren Ferguson: "This is a very disappointing result and a very disappointing performance in the first half. I felt that we just did not play with any conviction and that is the message that I gave to the players at the end of the game. We have to play with more belief as this was a game I thought we could come and win. In the second half we were more like ourselves and we created more chances, but we just didn't play well enough in the first half and that has cost us.

"There was a 10 or 15-minute spell in the first half where we just stopped doing what we do well and we had to ride that before the break. We did start to cause problems in the second half, but we just could not get that goal and the Dembele chance was a big opportunity for us. I really need the players to start believing in themselves in the same way that I believe in them, because if we do, I think we can have a really good season."