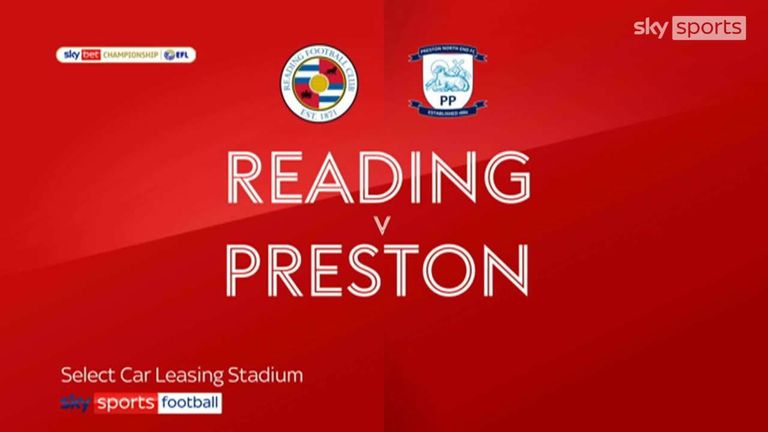 Highlights of the Sky Bet Championship match between Reading and Preston

Reading secured their first victory of the new season by defeating Preston 2-1 in the Championship.

In an even opening period, Reading went ahead in the 28th minute when Femi Azeez claimed his first senior goal by tucking home clinically at the far post.

Preston equalised in the 61st minute, Daniel Johnson slotting home a spot-kick, but the hosts soon regained their lead through John Swift and held on for the points.

Reading had lost their opening two games of the campaign, 3-2 at Stoke City in the league and 3-0 to Swansea City in the Carabao Cup first round.

Preston also made a poor start to their 2021-22 second-tier campaign, losing 4-1 at home to Hull last Saturday, but they bounced back with a 3-0 Carabao Cup win at League Two Mansfield on Tuesday.

And it was North End who began the brighter, with Scott Sinclair seeing an early shot blocked and Johnson firing wide when nicely positioned outside the home area.

Reading gradually improved and, after Lucas Joao had squirmed his way into the Preston box, he set up Ethan Bristow with a precise square pass.

The left-back struck the ball well but his goalbound effort was kept out by the sprawling body of visiting defender Sepp van den Berg.

Two minutes before the half-hour mark, though, Reading went in front. Josh Laurent's low cross from the left was palmed away weakly by Preston goalkeeper Daniel Iversen and Azeez, lurking at the back post, composed himself to slot home from close range.

It was his first senior goal for the club on only his third league appearance. The 20-year-old forward almost added a second soon after but, having cut inside decisively, he drove narrowly wide.

Reading maintained their momentum early in the second half and should have soon increased their advantage.

Swift released Joao with a sliderule pass but, after the Portuguese striker had rounded Iversen, he shot against the near post from a tight angle.

As Preston clung on, Azeez again proved difficult to handle but once more a poor finish ruined good approach work. But North End rode their good fortune and drew level just past the hour.

Reading 'keeper Rafael had saved a penalty from Johnson in the corresponding fixture last season but, this time, the Preston midfielder made no mistake.

However, eight minutes later, Reading were back in front. Swift exchanged passes with Joao and then cleverly shot past Iversen, the ball trickling in after striking the foot of both posts.

Despite late North End pressure, Reading held on reasonably comfortably for their first points of the season.

Reading's Veljko Paunovic: "I'm very happy for Femi's performance and for his goal. But what I liked, more than anything, is the team coming back together again and showing that warrior spirit that we have always had in the past. We showed this in the moments when we needed to defend and we needed to grind out the three points.

"The character, in the end, was based on a very good defensive performance and that's the biggest take for me from this game. Defensive set-pieces are a matter of attitude, knowledge and urgency. We displayed all of that again today. That was as positive as all the good football that we showed in the first half and a lot of minutes in the second half."

Preston's Frankie McAvoy: "I'm very disappointed that we lost the game. I didn't think that we did well enough in the first half but I thought that there was a big improvement in the second. Both of their goals, from our defensive point of view, were extremely poor. And if we keep conceding goals like that, it's going to be extremely difficult.

"We looked a bit fragile at times and that was disappointing for me, too. We've generally been pretty solid. At the end of the day, we had plenty of opportunities. On another day, it might have gone our way. But, this time, it didn't."