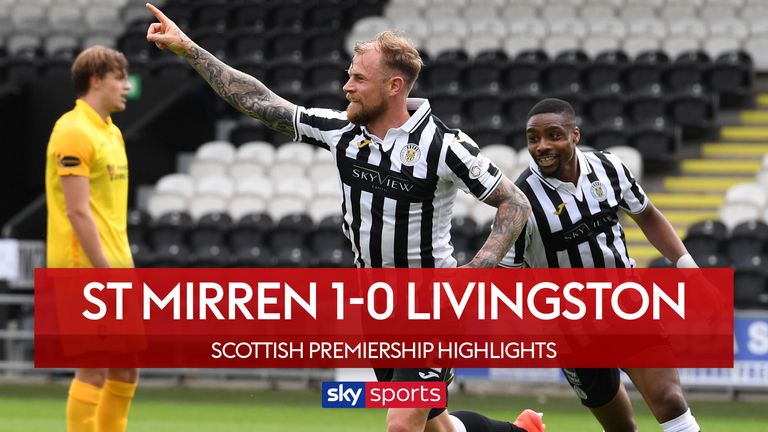 Highlights of the Scottish Premiership match between St Mirren and Livingston.

Debutant defender Richard Tait scored the only goal of the game as St Mirren began their Scottish Premiership campaign with a narrow home win over Livingston.

The opening game of the season was played behind closed doors due to the coronavirus restrictions and it had little to commend it until the half-hour mark when 30-year-old full-back Tait, signed from Motherwell in the summer, headed home Jamie McGrath's corner.

The players looked ring rusty after a five-month break, but Livi responded positively in the second half. They had the bulk of possession but could not find a way to get level. Instead, the home side had a couple of late chances to double their lead.

Defender Jack Fitzwater and attacker Alan Forrest made their first starts for Livi with Lyndon Dykes, who has been linked with Rangers, leading the line and all the players took a knee in support of the Black Lives Matter movement just before kick-off.

The game witnessed its first shot on target after 21 minutes when Livi's Efe Ambrose turned in from the left flank and tried his luck from distance but Alnwick gathered with confidence.

The home side took the lead with their first real effort nine minutes later with Tait nipping in unmarked to power McGrath's cross from the right past Robby McCrorie.

Five minutes before the break, Livingston midfielder Craig Sibbald flashed a drive from 25 yards against the outside of Anwick's left-hand post and behind, but that was the extent of the Lions' response.

A timely intervention from Sibbald a minute from the break prevented Cameron MacPherson getting in a shot against McCrorie at the end of a swift Saints break.

Livingston tried to force their way back after the interval.

Alnwick got his fingertips to a Forrest curled effort five minutes after the restart but the Paisley side defended the corner again with determination.

Livi's Nicky Devlin headed a Fitzwater cross just over the bar then claimed unsuccessfully for a penalty when Tait blocked his attempted cross.

The match descended into a scrap again with both defences coping with the mostly aerial attacks.

Livi pressed harder in the tiring closing stages but with nine minutes remaining in a rare St Mirren break, substitute Junior Morias, on for Kyle McAllister, cracked the base of the post with a volley from 10 yards.

A goal then would have made the final minutes easier for the home side but they had enough determination to see out four added minutes.

St Mirren manager Jim Goodwin said: "We had to stand up and be counted and every player out there put in a shift for the team. Defensively we looked fantastic and we'll improve on the attacking front.

"We knew going into the last 15 or 20 minutes if the score stayed 1-0 they would chuck everything at us and they did that. Jak Alnwick made some great decisions, caught a couple and punched at the right times.

"Joe and Conor (McCarthy), Joe in particular the ball was like a magnet to him. Then there were Marcus and Tait in the full-back positions.

"It's the most comfortable I think I've felt throughout my short managerial career on the sidelines when balls were going in the box. I've got four real warriors at the back who enjoy defending and Sam Foley in there in front of them who's very disciplined as well and a really composed goalkeeper. So it is a great start, 1-0, and clean sheet.

"I'm just delighted we got the first points on the board in the opening game of the season."

Livingston manager Gary Holt said: "In the first game you want to put down a marker and I don't think we did that.

"In the first half I didn't think we got in with the hard work, the sleeves rolled up and get in about them. I think we tried to play football first and foremost, let the talents show rather than putting in the hard graft first.

"The second half was a marked improvement from the first half. But we need to be at it from minute zero. We can't come in at half-time thinking we play football - no, we are grafters. We work hard and within that you get to play. I have always said that and that's something we will have to get right.

"Forget what went on, forget what's happened in the past and get back to what we are good at. I can take losing games. I can almost understand it and accept it as long as you are doing the right things and I don't think in the first 45 minutes we did."

It's a tough away trip for St Mirren next Sunday when they face Rangers at Ibrox (kick off 3pm), meanwhile Livingston will host Hibernian on Saturday afternoon (kick off 3pm).