Report and free match highlights from the Sky Bet Championship clash between Swansea and Bournemouth at the Swansea.com Stadium as Kieffer Moore came off the bench to score twice and help the Cherries battle back for a point. 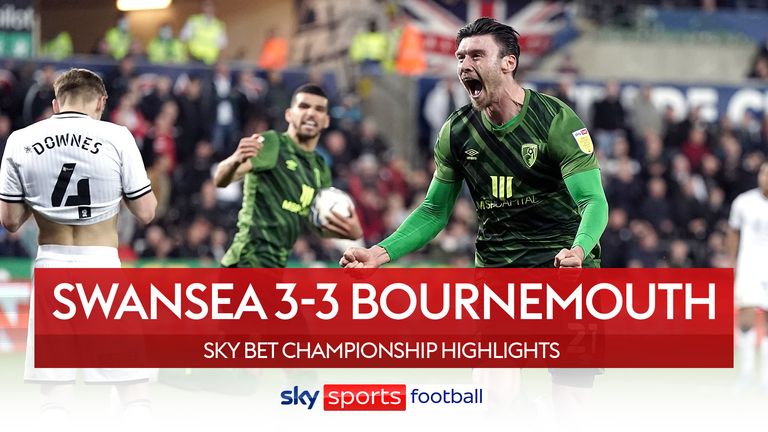 Highlights of the Sky Bet Championship match between Swansea and Bournemouth.

Bournemouth staged an incredible late comeback from 3-0 down to draw 3-3 at Swansea in their quest for automatic promotion from the Sky Bet Championship.

Kieffer Moore's brace - his first Bournemouth goals - and Dominic Solanke's penalty all came in the final 18 minutes of a pulsating contest after the Swans had looked on course for three points.

Joel Piroe's double inside the opening 12 minutes had set Swansea on their way, and Cyrus Christie added a third by finishing a superb length-of-the-field team move.

Nottingham Forest's victory at Fulham saw them cut the gap to the Cherries to three points with three games remaining, with Bournemouth welcoming Forest to the south coast in the penultimate fixture for both clubs next Tuesday.

Laird spent the first half of the season on loan at Swansea from Manchester United and his early touches were jeered by some home supporters.

Swansea took an early grip on proceedings, with Piroe exhibiting his scoring touch.

Michael Obafemi set up Christie after six minutes and Cherries goalkeeper Mark Travers could only palm his shot into the path of Piroe, who lashed home a fine volley.

It got worse for Bournemouth six minutes later as Obafemi fed Piroe and the Dutchman, with minimum back-lift, found the bottom corner of Travers' net.

With Forest leading at Fulham, Bournemouth required an urgent response and Swansea goalkeeper Andy Fisher was brought into action by Lewis Cook and Solanke.

Lowe was booked for scything down Ben Cabango, who was making his 100th Swansea appearance, before almost halving the deficit.

A stunning Cherries counter-attack ended with some wonderful Lowe footwork and a shot which Fisher pushed around the post.

Jefferson Lerma met the resulting corner from six yards but his header landed inches wide of the far upright.

Philip Billing was sent on at half-time and, with Cabango forced off by injury shortly afterwards, the Cherries had an aerial advantage that Moore would later exploit.

Fisher denied the unmarked Jaidon Anthony from close range, and Swansea extended their lead after 58 minutes with the goalkeeper's precise pass starting a flowing move.

Hannes Wolf and Piroe combined to find Obafemi and his pass was lashed into the roof of the net by Christie, who had arrived into the area at breakneck speed.

Moore, back from a 10-week lay-off after breaking his foot, gave Bournemouth hope by heading home Anthony's corner.

Nine minutes later Ryan Manning was punished for handball and Solanke swept home his 29th goal of the season from the spot.

The game had ticked into its final minute when Fisher kept out Solanke's header, but he was unable to stop Moore sliding in at the far post to equalise and Bournemouth had secured what could be a precious point.

Swansea's Russell Martin: "Kieffer Moore should get sent off in the 73rd minute. I don't like moaning about refereeing decisions, but he's elbowed Flynn (Downes). Ben Cabango coming off is a massive moment for us. We had probably the smallest back three playing against the biggest front three players. They take our most dominant player out aerially, and then it's some key moments really. The third goal, it's a push on Flynn. These are just clear decisions. We should win the game at 3-0 up.

"But it's a different feeling to Reading (when Swansea led 4-1 on Easter Monday) before drawing 4-4, it's not a mentality problem. We're playing a team who are where they are in the league, fighting for everything."

Bournemouth's Scott Parker: "Immense spirit, desire, passion - all the words you commonly hear coaches say
they want in their team. We showed that in abundance. We started very slowly against a very good side and we had to go foot to the floor and be brave.

"At 3-0 you probably think take your medicine and regroup, but I am very proud of the team. To come back from 3-0 down was massive for us. Something you need from a team comes within, and my team have shown that consistently this year."