Report and highlights from the Sky Bet Championship clash between Swansea and Stoke City at the Liberty Stadium as goals from Nick Powell, Sam Clucas and Leo Ostigard sealed victory for the Potters on Tuesday night 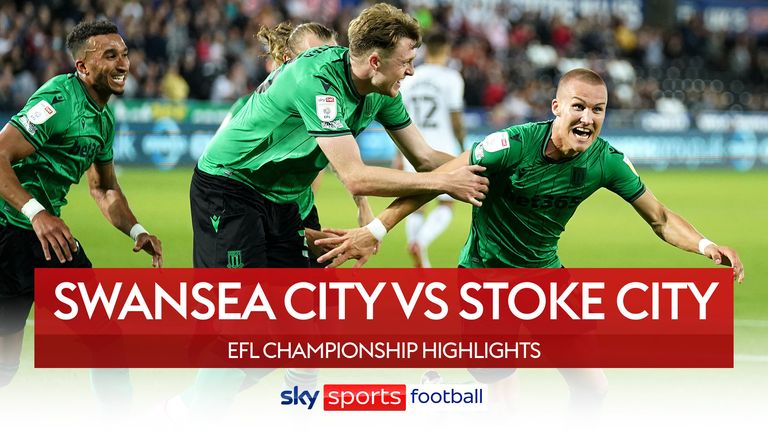 Highlights of the Sky Bet Championship match between Swansea City and Stoke City.

Sam Clucas starred against his former side as Stoke saw off Swansea 3-1 to maintain their impressive unbeaten start to the new Championship season.

Clucas, who left the Swans in 2018, scored the Potters' second and rubbed salt in the wound of the home supporters by taunting them with his celebration.

Swansea had a shocking first half, during which Nick Powell gave the visitors a deserved lead, and Clucas made it 2-0 soon after the break.

Leo Ostigard put the game to bed on the hour mark before Swansea substitute Joel Piroe grabbed a 73rd-minute consolation.

Josh Tymon also whipped in two dangerous crosses after escaping down the left, both of which Swansea were lucky to escape from without conceding.

A Stoke goal looked like it was coming and it arrived in the 15th minute as Tommy Smith's free-kick from the right was headed home by Powell.

Swansea had dominated possession yet created little in their goalless draw with Sheffield United last time out and their first half followed a similar theme, but this time with less of the ball.

There were far too many misplaced home passes and Swansea head coach Martin decided he had seen enough even before the break, replacing Yan Dhanda with striker Piroe in just the 38th minute.

Swansea's first 45 minutes was summed up by an awful Matt Grimes corner right on the half-time whistle.

Powell limped off five minutes into the second half after taking a heavy knock, but Stoke made it 2-0 in the 53rd minute.

Clucas ran in on goal and when Swansea failed to close him down, he poked the ball into the bottom and corner and celebrated by taking off his shirt. He was booked and then showed the name on the back to the home fans who jeered loudly.

But soon after Stoke made it 3-0 when Ostigard slammed home from close range after the giant Harry Souttar headed Clucas' corner against a post.

Surridge had two more chances to heap further misery on Swansea but the game had long since ended as a contest.

Piroe did pull one back for Martin's men with a cool finish from Jake Bidwell's cross, but Stoke were fully deserving of the three points.

Swansea's Russell Martin: "It's a difficult result to take. The most disappointing thing for us as a group is that we conceded from two set-pieces. There was a mistake in there. I can accept the mistake, that'll happen less and less the more conditioning we get. The set-pieces hurt. There was not much between the two teams. If anyone tells you any different, I would disagree with them. It was a really competitive game.

"We had a lot of control. We didn't start very well and the guys were tired. This was our biggest fear before the game. We are not quite conditioned well enough to play the way we want to play, but we'll get there. The pre-season was disrupted so I don't want to be disrespectful to anyone, but they are not as fit as they should be or they can be for our way of doing things."

Stoke's Michael O'Neill: "I'm delighted with both the performance and the result. The first 25 minutes were excellent and we dealt with a good team. I don't think we created too many chances, but we got the goals at the right time. We were comfortable until they scored, but I thought we saw the game out pretty comfortably.

"It's a great three points for us. This is quite a new team with new players who are young. There has been quite a big turnaround in terms of the age profile of the squad. Joe Allen and Sam Clucas both had excellent games. We are only three games in so there is a lot of work still to do."