Free match highlights and report as Fred, Edinson Cavani and Mason Greenwood complete another Man Utd comeback, meaning they have won a PL-high 28 points from losing positins; Son had put Spurs ahead after Man Utd had goal controversially ruled out by VAR; Spurs now six points off fourth 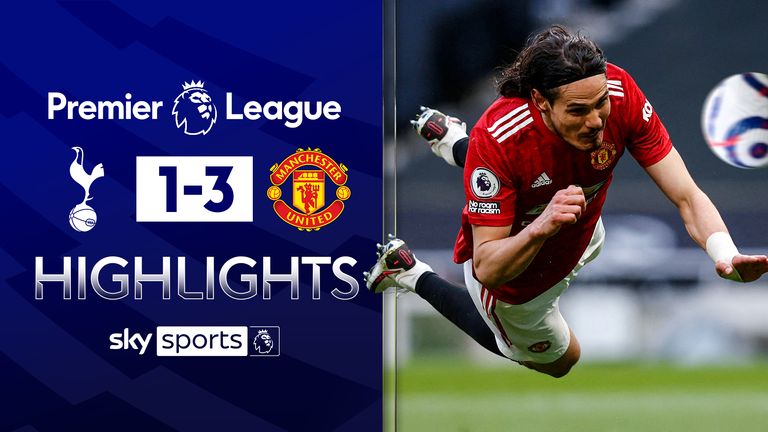 FREE TO WATCH: Highlights from Manchester United's 3-1 win against Tottenham Hotspur in the Premier League.

Manchester United came from behind once again to win 3-1 at Tottenham and dent the hosts' top-four hopes with just seven Premier League games remaining.

Edinson Cavani had a goal controversially disallowed on 33 minutes after VAR spotted a flailing arm from Scott McTominay on Heung-Min Son in the build-up, a decision described as "embarrassing and ridiculous" by Sky Sports' pundits at half-time, while the South Korea forward himself put Spurs ahead before the break with a far-post finish from Lucas Moura's centre (40).

United levelled early in the second half as Fred converted a few yards out after Cavani's shot had been parried by Hugo Lloris into the Brazilian's path (57).

The visitors went ahead as substitute Mason Greenwood's brilliant ball was converted by the diving header of Cavani (79), and Greenwood rounded off a brilliant second-half performance for the visitors, smashing home after fantastic work from Paul Pogba to assist (90+6).

The win means United have taken 28 points from losing positions, the most in the Premier League by some distance, leaving them firmly lodged in second place with nine points separating them and fifth place

But the result leaves Jose Mourinho's Tottenham six points behind fourth-place West Ham with time running out to bring Champions League football back to the club next season.

After 36 hours of speculation surrounding the future of Harry Kane if Spurs do not make the top four this season, this fixture had added intrigue, not least for Mourinho against his old club.

Manchester United started Pogba on the left of a front three, but the visitors struggled to play through midfield during a slow first half, and though Spurs created very little either, their defence seemed more at ease.

But the game did spring into life with a moment of VAR controversy, with United thinking they'd taken the lead. Cavani swept home low, left footed from eight yards from Pogba's lovely through ball in the box, but VAR spotted a stray arm from McTominay on Son in the build-up. 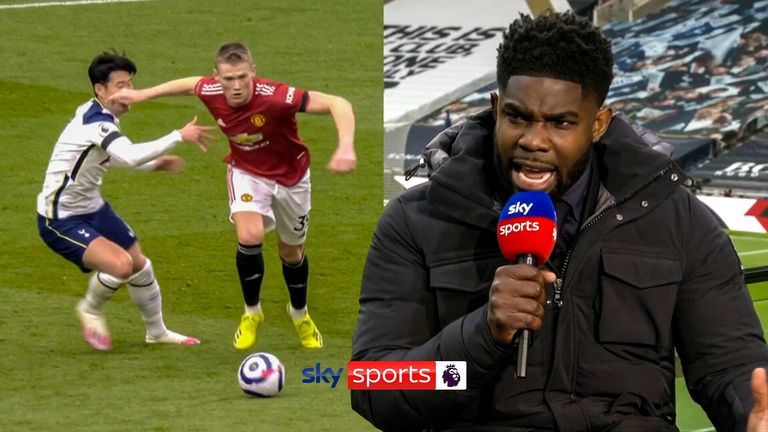 Roy Keane, Micah Richards and Jamie Redknapp were shocked by the referee's decision to disallow Edinson Cavani's goal for a foul in the build-up by Scott McTominay

McTominay's action was deemed accidental, with the Scot therefore not receiving a second yellow card, but enough for the officials to rule out the goal, much to United's anger after a similar stray arm from Giovani Lo Celso on Marcus Rashford had gone unpunished.

"If that's a foul, we should all go home," said Roy Keane on Sky Sports regarding the disallowed goal, while Micah Richards said: "It's embarrassing, this is not football anymore, this is spoiling the game."

PGMOL, the body responsible for match officials, said the incident wasn't part of McTominay's natural running movement, and was careless.

To add to United's frustration, Son then turned goalscorer just minutes later with Spurs' first shot on target, turning home at the far post from Lucas Moura's ball across the face of goal from Harry Kane's first-time pass in-behind, which Victor Lindelof was inches away from intercepting.

It was Son's 14th Premier League goal of the season, equalling his best return in the competition set in 2016/17.

As we've become accustomed to seeing with United this season, Ole Gunnar Solskjaer's side turned it on after the break, and after Lloris turned away McTominay's curling effort, they duly levelled.

Bruno Fernandes, Rashford and Fred combined nicely with little room to manoeuvre around the box, with Fred slotting Cavani through on goal. Cavani's left-footed shot was saved by Lloris, but it parried into Fred's path to turn home under the crossbar for only his second Premier League goal and his first in 73 shots at goal.

After such a cagey start, the game had now completely opened up. Dean Henderson stopped Son's low shot with his feet, then used his feet again to deny Kane from a tight angle, either side of Lloris save from Fernandes' effort at the other end as both sides looked for a winner.

United went ahead with 11 minutes remaining as Fernandes' deft skill found Greenwood, who delivered a wicked ball onto the head of Cavani eight yards out, and the Uruguayan stooped low to convert a fantastic header beyond Lloris.

Tottenham made three changes from the 2-2 draw against Newcastle last weekend; Japhet Tanganga, Davinson Sanchez and Carlos Vinicius dropped out, with Serge Aurier, Eric Dier and Heung-min Son back in the XI.

Luke Shaw and Marcus Rashford were both fit to start for Man Utd, with Ole Gunnar Solskjaer making one change from the 2-1 win against Brighton.

Last weekend’s winning goalscorer Mason Greenwood dropped to the bench, with Scott McTominay coming into the XI. Dean Henderson was back in goal for the Premier League match, replacing David de Gea from the midweek victory at Granada.

Spurs almost levelled with six to go, with Cavani diverting the ball onto the post after chaos at a corner, but United made sure of the points in the last minute of stoppage time.

Pogba, signed by Mourinho at United in 2016, was brilliant in the build-up, shaking off Eric Dier and Pierre Emile Hojbjerg before feeding Greenwood, and the youngster fiercely struck right-footed past Lloris at the near post, despite the Frenchman getting a touch.

It was the perfect second-half showing from comeback kings United, but that's 18 points lost from winning positions for Spurs, not a trait typically associated with a Mourinho side, with only Fulham (19) and Brighton (20) faring worse. 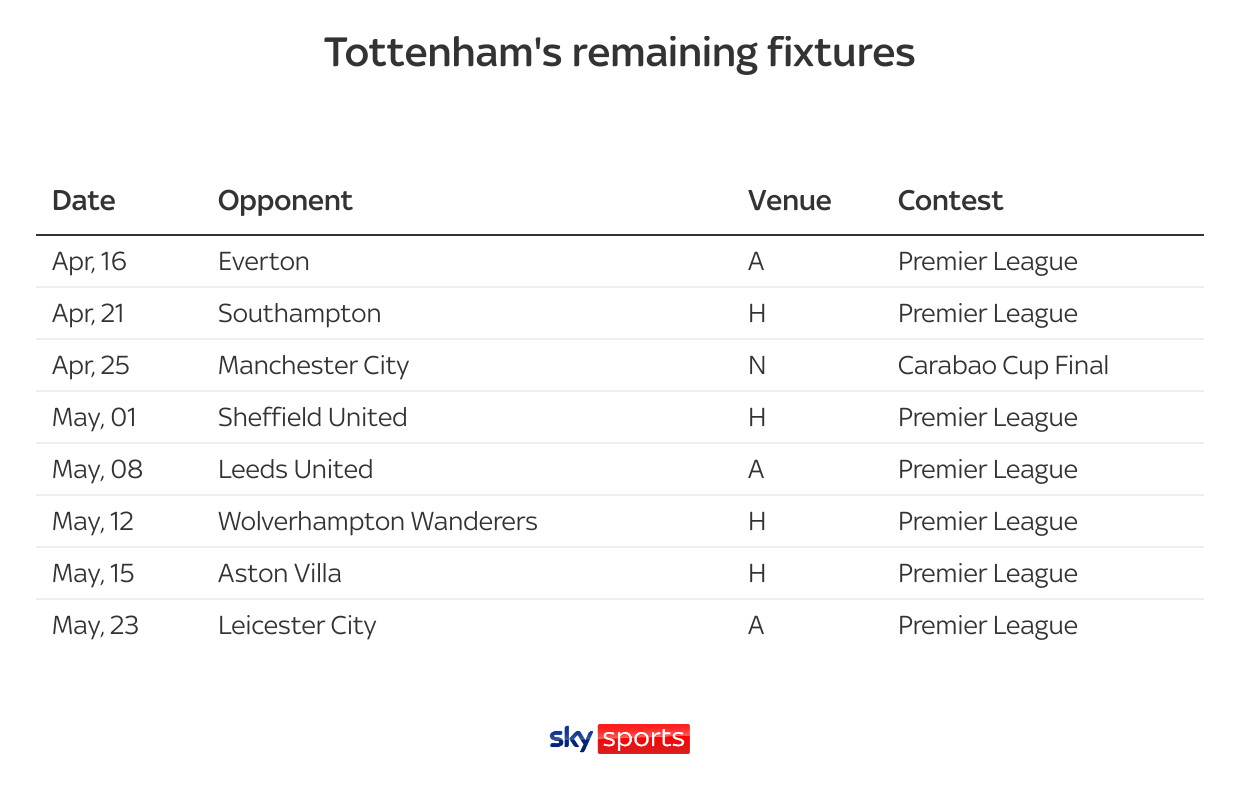 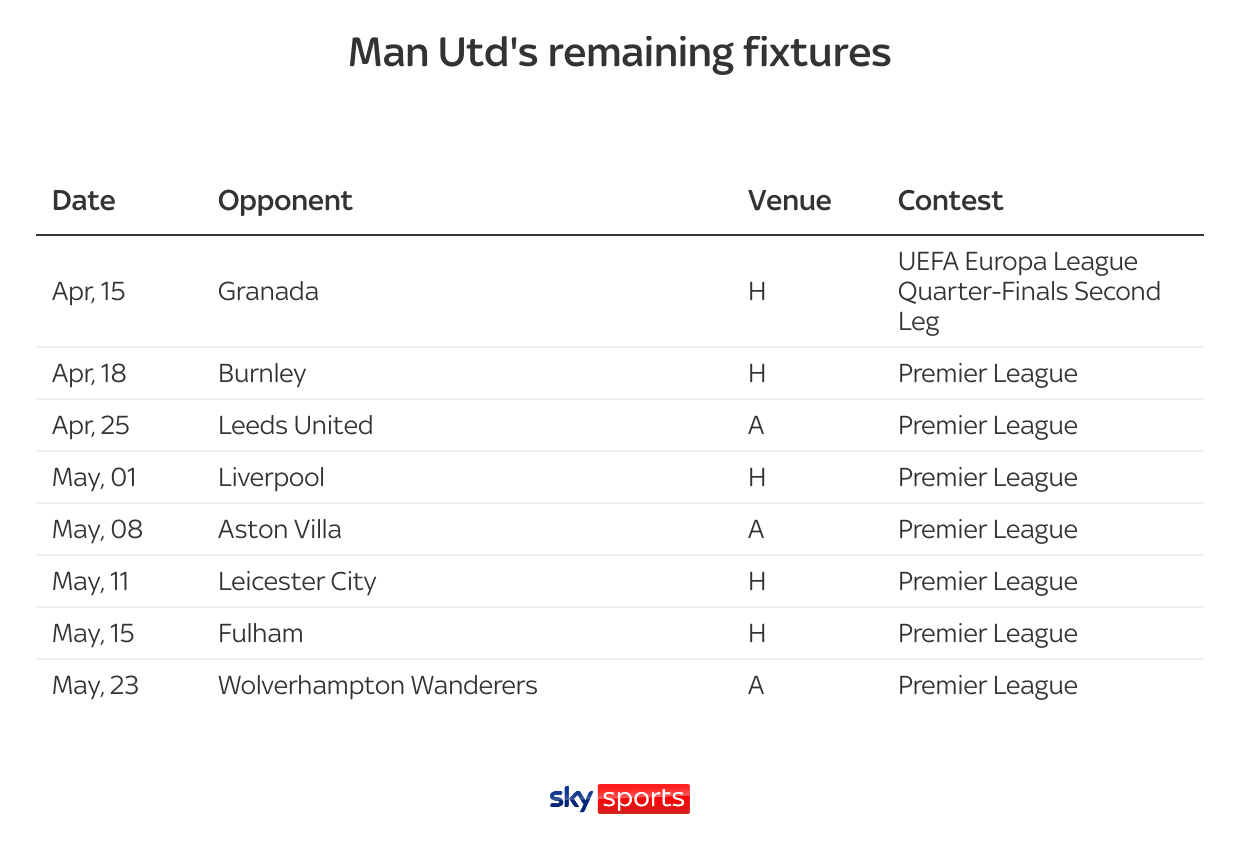 What the managers said... Jose reacts angrily to Ole comments

Man Utd boss Ole Gunnar Solskjaer on Son's reaction in build-up to disallowed goal: "I have to say, if my son stays down like this for three minutes and gets ten of his mates around him… if he gets that in the face from one of his other mates and he needs ten of his mates to help him up, he won't get any food. 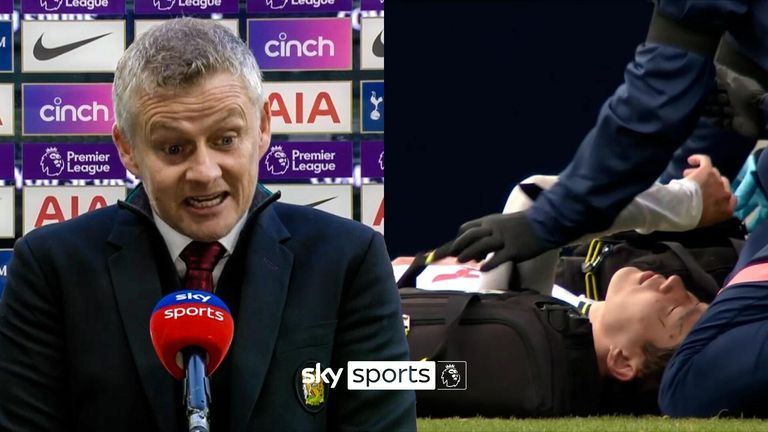 Mourinho reacted angrily to these Solskjaer's comments about Heung-min Son

"It was an absolutely top reaction after that. We played some great stuff in the second half but after they scored, we feel the injustice there and the adversity into our players heads and good character showed that we had to come back from it. We cannot let those decision ruin a good season for us."

Spurs boss Jose Mourinho: "Let me tell you something. I am very, very surprised that after the comments that Ole made on Sonny, you don't ask me about it. And I told Ole already this, because I met him just a few minutes ago. If it's me, telling that player A B or C from another club, "If it was my son I wouldn't give him dinner tonight," or something like that, what would be the reaction? 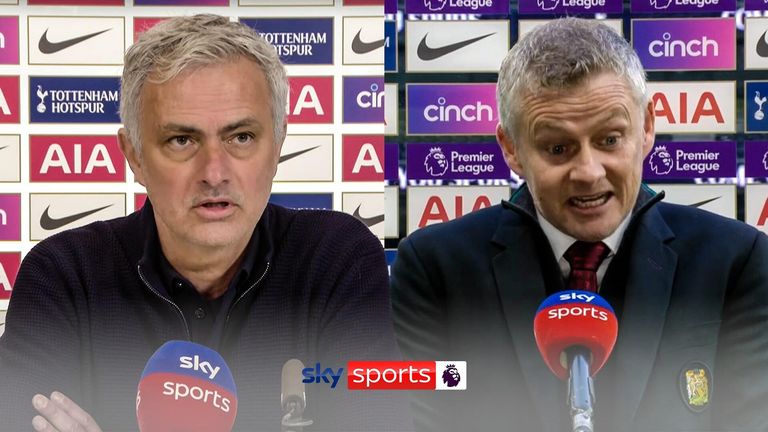 Jose Mourinho was disappointed by comments made by Ole Gunnar Solskjaer

"It is very, very sad. I think it's really sad that you don't ask me about it. It's really sad that you don't have the moral honesty to treat me the same way you treat others. I just want to say, Sonny is very lucky that his father is a better person than Ole, because I think a father - I am a father - you have to always to feed your kids, it doesn't matter what they do. 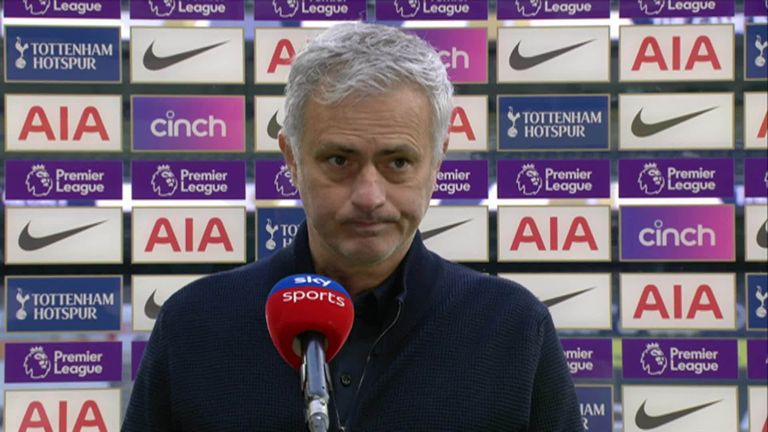 Tottenham go to Everton in the Premier League on Friday Night Football, live on Sky Sports Premier League at 8pm, while Manchester United host Granada in the Europa League quarter-final second leg at 8pm on Thursday, leading 2-0 from the first leg.