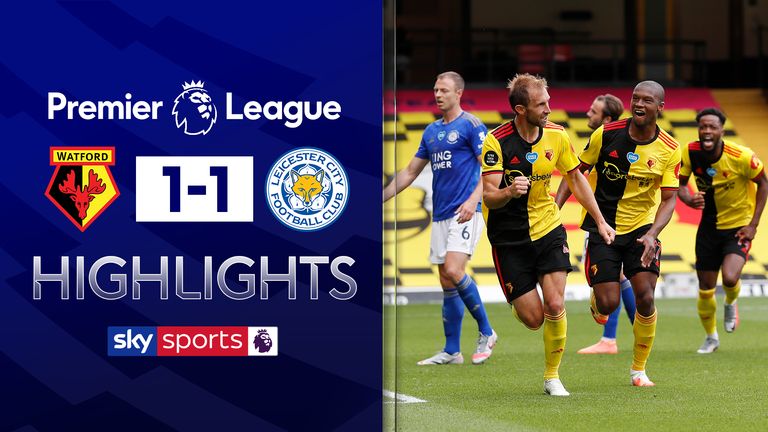 FREE TO WATCH: Highlights from the 1-1 draw between Watford and Leicester in the Premier League.

With the evenly fought contest entering its final minute, both teams appeared to have settled for a goalless draw before Leicester left-back Ben Chilwell found the top corner of the net with an exquisite strike.

However, if the visitors thought they had taken all three points, they were mistaken as Watford battled back to earn a crucial draw in incredible fashion.

Substitute Jose Holebas sent over a stoppage-time corner that Christian Kabasele failed to control, only for Craig Dawson to produce a spectacular volleyed finish that may prove crucial in the Hornets' battle against relegation.

Man of the match: Craig Dawson

As a result, Nigel Pearson's side have moved a point clear of the relegation zone, albeit having played a game more than some of their rivals, while Leicester have gone six points ahead of fourth-placed Chelsea, who travel to Aston Villa on Sunday.

How Hornets and Foxes shared spoils in Hertfordshire

After more than 100 days without football, the two teams took time to readjust to the pace of the game, but when they got acclimatised, it was like they had never been away.

The Hornets may have looked more than a little rusty before half-time, but they came out a team reborn in the second period, and will surely regret a number of missed chances, many presentable.

Firstly, Ismaila Sarr was unable to to beat Kasper Schmeichel when clean through on goal after a beautiful defence-splitting pass from Etienne Capoue, before Troy Deeney headed Kiko Femenia's cross from the right inches past the post.

Back came the Foxes, though, with Caglar Soyuncu failing to head home James Maddison's inviting free kick and Marc Albrighton thumping a shot against the post with Ben Foster beaten.

Watford started with 10 of the 11 players who featured in their most recent league game at Crystal Palace on March 7.

Meanwhile, Leicester brought in right-back James Justin for his third Premier League game in place of Ricardo Pereira, who is out for the season, and Marc Albrighton got the nod over the returning Ayoze Perez, who started on the bench.

From the rebound, the Hornets No 1 was then forced to make a brilliant low stop to turn behind Maddison's goalbound effort as both sets of players began to tire with the game becoming stretched.

All of which may explain the frantic finale as first Chilwell curled home from the edge of the box to end a neat Leicester break and then Dawson crashed home a 93rd-minute volley to earn his side a deserved point in their battle to beat the drop.

Nigel Pearson: "When you concede at the point we did in the context of the game it can be very difficult to recover from.

"But we created one last chance and were able to take it, so I'm really pleased for the players. I think when you consider the limited preparation time that we've had, and remember that the players came back in good condition physically, it's not as if we've had to build too much on their base level of fitness, to get into a match fitness conditions is not necessarily easy, especially in the short time frame that we've been working in."

Brendan Rodgers: "I felt we were deserving of the win, especially as the game went on. We showed a really good level of fitness. I thought we had spells where we had great control, Ben Foster made a great couple of saves, then we scored a brilliant goal.

"We dealt well with crosses into the box all game. If you analyse it, the luck was against it. It just hits the guy's toe, he's not aware of it. And then it's a good finish.

"We take a point, which takes us a point closer to where we want to be."

Man of the Match - Craig Dawson

As ever, the experienced central defender was a rock at the heart of the hosts' back line, meeting every header, making every clearance and reading the game superbly.

However, it was at the other end where the 30-year-old really made his presence felt and in some style too as with the match entering injury time, the centre back drew his team level.

Sure, the ball did fall rather fortuitously at his feet after Kabasele's mis control, but he still had a lot to do to find the net, which he managed with an acrobatic volley.

And what is more, it was Dawson's first goal in the Premier League in 31 appearances stretching back to February 2018 and his first ever in the competition for Watford in 21 games.

Watford take on Burnley at Turf Moor on Thursday, while Leicester face struggling Brighton at the King Power on Tuesday, with both matches kicking off at 6pm live on Sky Sports.