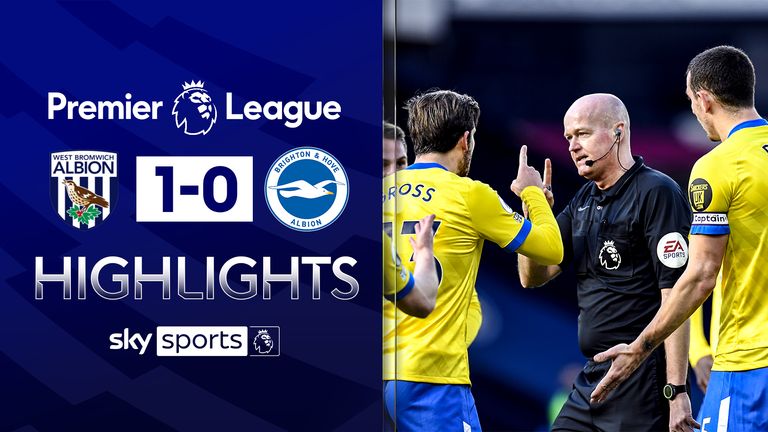 FREE TO WATCH: Highlights from West Brom’s win over Brighton in the Premier League

West Brom secured a 1-0 victory over Brighton to give their Premier League survival chances a boost, but it was referee Lee Mason's controversial decision to rule out Lewis Dunk's first-half free-kick which took centre stage at The Hawthorns.

Kyle Bartley gave West Brom the perfect start, heading home Conor Gallagher's corner in the 11th minute, before Pascal Gross's spot-kick for the visitors struck the crossbar eight minutes later after Okay Yokuslu was adjudged to have handled in the penalty area after a VAR check.

Then came an extraordinary moment and one Mason will want to forget.

Brighton thought they had levelled in controversial circumstances when Dunk curled in a quick free-kick from the edge of the penalty area. Referee Mason blew his whistle - before quickly blowing again - but in between, Dunk had taken a quick free-kick and scored while Sam Johnstone was still lining up his wall.

Mason appeared to rule the goal out straight away but after Brighton's players surrounded him to complain, the referee eventually gave the goal - only to finally reverse his decision after a chaotic few minutes and pull the game back for the visitors to retake their initial free-kick.

The drama continued into the second half at The Hawthorns and you could not keep Mason out of the game as the referee awarded Brighton another penalty after Dara O'Shea brought down Gross.

Gross stepped away from penalty duties after missing earlier in the game, but substitute Danny Welbeck fared no better, crashing his spot-kick against the post as West Brom survived again.

Man of the match: Kyle Bartley.

Sam Allardyce's side held on to take a remarkable three points which hands them a lifeline in their bid to stay in the Premier League, while defeat drags Brighton, who will be wondering just how they lost the game, right into the relegation mix.

However, the spotlight remains on the standard of refereeing in the Premier League after another controversial incident for the officials in what has been a season full of them.

Why did Mason blow twice?

The guidance from the PGMOL regarding Dunk's free-kick is that Lee Mason blew for the second time because he saw that goalkeeper Sam Johnstone wasn't ready.

How the controversy unfolded...

28: FOUL! Gallagher bundles over Mac Allister right on the edge of the West Brom penalty area. A chance for the visitors to respond...

29: NO GOAL! Dunk takes an early free-kick and he puts the ball in the back of the net while Johnstone is still lining up his wall. The referee appears not happy with the quick free-kick and the goal will not stand. However, it appears Lee Mason did blow his whistle, so surely the goal should stand! Brighton are not happy!

GOAL! WEST BROM 1-1 BRIGHTON (Dunk, 29) Hang on, the goal now appears to have been given! What is going on here?

West Brom are now furious! There will also be a VAR check...

33: The referee has gone over to the touchline and he has explained to both managers what has happened. It appears he did blow his whistle, but there was another blast of the whistle before the ball hit the back of the net. The game will be restarted with the free-kick. Just to clarify, it's West Brom still leading through Bartley's early goal if you'd forgotten.

35: SAVE! Dunk strikes the free-kick again, but this time Johnstone is ready and makes the save.

We move on but that's certainly not the last we'll hear of that incident...

'This is unbelievable, I have never seen anything like this'

Sky Sports' Lee Hendrie: "There was (a noise) and that is why they were furious... there is a big gap for him and he almost passes it into the net. Big Sam cannot quite believe what is going on! This is unbelievable and I have never seen anything like this in my whole time in football.

"I'm just looking at Lee Mason. He checks the wall, checks everything is in place, blows the whistle, and I just do not understand why he blows it again. Whether he looks up and sees Sam Johnstone so clearly away from his goal and there is a big area of the goal for them to stick it in, it is just an absolute bizarre moment in the game.

"And thankfully VAR got it right...."

West Brom boss Sam Allardyce: "The referee blew the whistle twice so that was why it was disallowed. Lee Mason came over and explained the situation regarding that - the only way we can avoid it is to put someone on the ball and don't move back until the referee moves you back. I thought everybody had to get set." 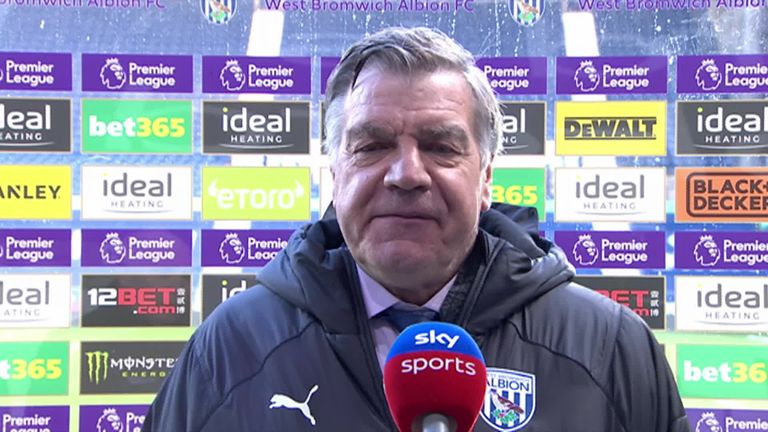 Brighton boss Graham Potter: "As far as I know, Lewis Dunk asked to take the free-kick quickly and the referee said yes. In between that, there was another whistle. I don't know what that whistle was for. It would be nice for a bit more clarification. I don't know what the second whistle is for. I don't understand that.

"The confusion is on the pitch and it gets worse when someone outside this area is making the decisions. It is what it is. We've not helped ourselves with the two penalties so I cannot put it all down to that [disallowed goal]. We need to improve and get better at that [taking penalties]. We're never going to get two better chances. We have to stay calm." 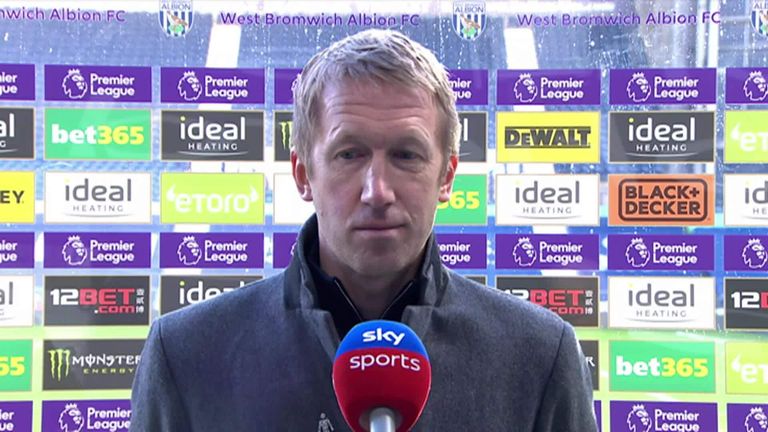 Brighton's Lewis Dunk to Sky Sports: "It's embarrassing, it's a horrendous decision. I said to the ref can I take it, he blew his whistle, and I took it. Just because there was so much pressure from the bench. Why doesn't he come and speak to the press like me? Never, they hide behind their bubble.

"I don't think he knew what he was doing. He gave the goal, why did he give it? I don't know why VAR was getting involved, he said 'goal'... you can look on the video if you want.

Had he lost control of the game? "Yeah, he did. Fact." 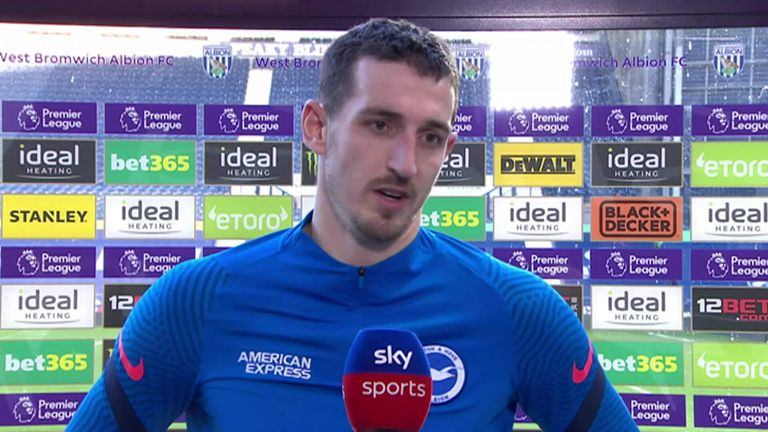 West Brom goalkeeper Sam Johnstone: "It happened that quick, I'm not sure what has gone on, to be honest. The referee checked it and the people checked it. It is what it is.

"It's nothing to do with us. It was the ref's decision. Brighton had two penalties as well and they've not gone in. It's a massive win for us."

West Brom defender Kyle Bartley to Sky Sports: "The ref blew his whistle, he said, to speak to someone in the wall, there was a bit of pushing. There was a bit of confusion but Lee Mason dealt with it really well and came to the right conclusion. It was a bit confusing, I don't think it would have been right for them to score like that." 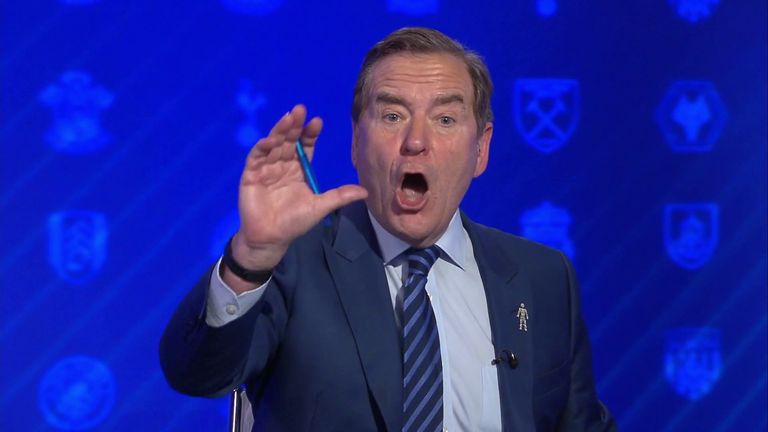 On Soccer Saturday, Jeff Stelling describes the refereeing around Brighton's disallowed free-kick as a 'shambles' and 'complete nonsense'

Confusion over a Brighton goal that was ultimately disallowed at West Brom was slammed as a "shameful, disgraceful piece of nonsense" by Jeff Stelling.

The Soccer Saturday host was in disbelief as Paul Merson described events at The Hawthorns.

"This is a shambles. Lee Mason what have you done?" Stelling questioned, as the Soccer Saturday team watched on.

"VAR has given no goal and now he is going to look at the screen. This is a total, utter, shameful, disgraceful, piece of nonsense!

"This is the dream team of Lee Mason and Simon Hooper, who is the VAR at the moment. You could not make this up."

Merson added: "I've never seen anything like this. He's completely out of control."

Professional Game Match Officials Limited (PGMOL) issued the following description of events during the second half: "The referee blows the whistle, sees the keeper isn't ready, blows it again... and because the ball hadn't crossed the line, VAR can intervene.

"He tells the ref that it hadn't gone in, and so they restarted with the free-kick." "I've been in situations in games where I've lost focus for a little while. I think that's the key thing: Lee has lost focus here.

"He's tried to regain it, he's realised, but he's lost a little bit of concentration, and he's not quite in that zone for making accurate decisions.

"He should never have had the free-kick taken in the first place, but having done that, he's then got to follow the process through. He's quickly realised, and quite rightly blown a second time to stop that, to control it, but the ball has entered the net.

"It's at that point the VAR has told him that the ball has not entered the net before the whistle, so therefore the goal doesn't stand.

"The fact he's gone across to the bench has given him that thinking time, created that time for him to get his thoughts and himself together, so that when he goes back, he's in a better frame of mind to restart that situation."

What the result means…

They move to within eight points of safety, having played one game more than the sides around them.

They also move to within nine points of Brighton, who stay 16th.

Graham Potter's side are just four points above the drop zone, also having played a game more than the majority of the teams below them.

Up next for West Brom is another home game against Everton, which is live on Sky Sports next Thursday; kick-off 6pm.

Meanwhile, Brighton are not back in action until next Saturday when they host Leicester, also live on Sky Sports; kick-off 8pm.