Report and free highlights as Liverpool win back-to-back Premier League away games for the first time this season and move third in the table with victory at West Ham. 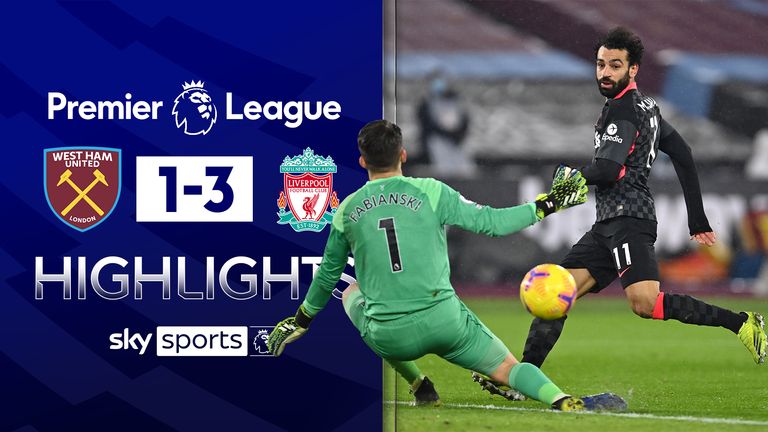 Mohamed Salah produced two moments of magic as Liverpool's recovery continued with a 3-1 win at West Ham in the Premier League on Sunday.

The Egyptian ended his six-game goal drought in the league by cutting in from the right and curling a trademark shot inside the far post on 57 minutes, after Liverpool had struggled in the final third up to that point.

He then doubled his tally and Liverpool's advantage with a sublime touch and finish to convert a counter-attack 11 minutes later, before Georginio Wijnaldum capped the win five minutes from time, tucking in from close range after neat play from subs Roberto Firmino and Alex Oxlade-Chamberlain.

Craig Dawson grabbed a late consolation (87), finishing smartly from a corner, but Liverpool - inspired by the brilliant Salah - are now up to third in the Premier League, four points behind leaders Manchester City, who have a game in hand.

West Ham - who saw their six-game winning streak across all competitions come to an end - are now five points behind the Reds in fifth.

After five league games without a win, Liverpool returned to form in their 3-1 victory over Tottenham on Thursday but struggled to find their cutting edge during the first half at the London Stadium.

Divock Origi - in for the injured Sadio Mane - sent a shot off target from a tight angle before Wijnaldum blasted over soon after and Salah nodded wide 22 minutes in.

West Ham were yet to have a shot by that point but Pablo Fornals then forced Andy Robertson to head away his deflected goal-bound shot before Dawson pulled off a similarly crucial intervention at the other end, throwing his body in front of Xherdan Shaqiri's drive.

Nat Phillips, stepping in at centre-back with Joel Matip and Fabinho added to Liverpool's injury list, headed away a dangerous free-kick before Michail Antonio met another high cross to warm Alisson's hands with the first effort on target of the match on 40 minutes.

It was Liverpool who finished the half on the front foot, though, with Origi steering a fine Thiago Alcantara pass wide of the near post before Salah struck down Lukasz Fabianski's throat on the stroke of half-time.

Liverpool picked up that momentum from the restart with Aaron Cresswell making a superb block to deny Salah from close range before Origi shot into the side-netting and Salah flicked a header on to Fabianski from a long Henderson pass.

Antonio then passed up a fantastic chance, shooting wide from just inside the box after James Milner was caught wrong-footed - and West Ham were made to pay.

Milner was subbed off after that incident and cameras caught him having a long exchange with boss Jurgen Klopp about why he had been removed - but the pair were celebrating on the touchline seconds later when Milner's replacement Curtis Jones fed Salah break the deadlock.

Salah's left-foot strike took him to 20 goals in all competitions for the fourth consecutive season, a feat not achieved at Liverpool since Ian Rush in the 1980s.

He increased that tally further on 68 minutes when Liverpool broke away from a West Ham corner. Trent Alexander-Arnold sent a long ball forward for Shaqiri and his lobbed pass into the box was beautifully controlled and then finished with two slick touches by Salah.

Substitutes Firmino and Oxlade-Chamberlain played a neat one-two on the edge of the box before setting Wijnaldum up for Liverpool's third to make sure of the points, and although West Ham belatedly made their strength at set-pieces count with Dawson's close-range finish, Liverpool made it back-to-back away wins for the first time in the Premier League this season to move back into title contention. 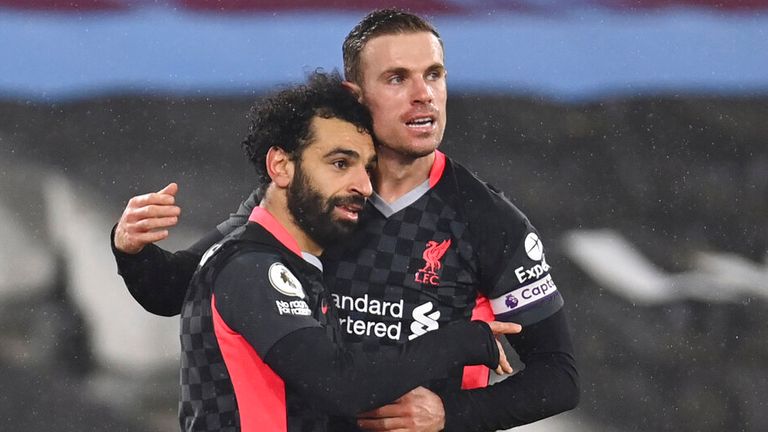 Graeme Souness and Jamie Redknapp debate whether Mo Salah is considered greedy by other players or if he should be given more credit for his exceptional numbers.

"The centre-backs of Liverpool were really good but Salah changed this match. The first goal, we expect from him. The second goal was just exceptional.

"I said Salah was back to his best and he has won Liverpool this game with a really special finish [for the second goal]."

"It's 15 goals now, top scorer, but it still feels he doesn't get the love we give to some players. Maybe people perceive him of being too greedy? It's incredible. His numbers are phenomenal." 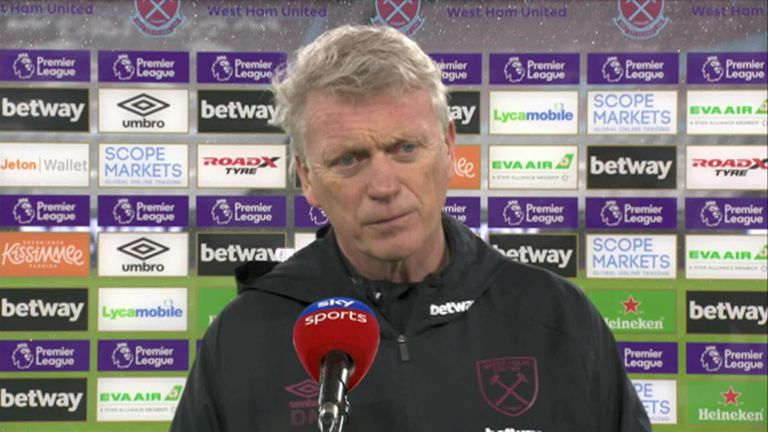 West Ham boss David Moyes: "I thought we competed with a really good team, but they were just too strong for us today. Liverpool are not the teams we're challenging. We want to challenge them in individual games but their consistency over a season has them higher than us. They were better than us today so we can have no complaints.

"Liverpool were very good in pressing and were after us at every opportunity. We needed to show more composure and we didn't do that on enough occasions. There are three or four teams in the Premier League that are better than all the rest and Liverpool are in that category.

"I've been in the job a year now and I feel we're making steady strides. We're in a strong position but we've got a long way to go. It's time you need to build and stability but we've got a good idea of where we want to be in the future." 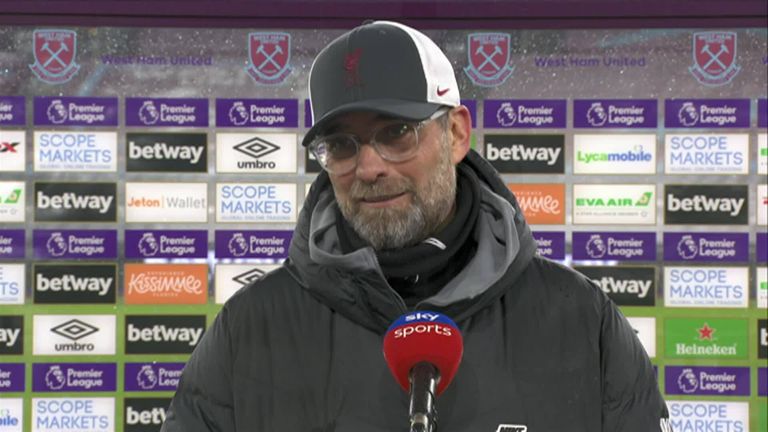 Liverpool boss Jurgen Klopp: "I'm very satisfied. It was a great game and a very professional, controlled game against a usually flying side. We had to be patient in the first half and we made a little adjustment at half-time offensively and in our positioning and it paid off. All three of our goals were unbelievable and I'm really happy.

"We found the right moment to take Mili off [James Milner] as he had a slight hamstring. He said 'if you take me off and we score in the next moment, I'm completely fine', which we did!

"We've spoken a lot in the past few weeks and maybe in the last week we've just said the right things. Maybe that's it! This is a really good group and they're not happy with not being successful. They always stay with the right attitude." 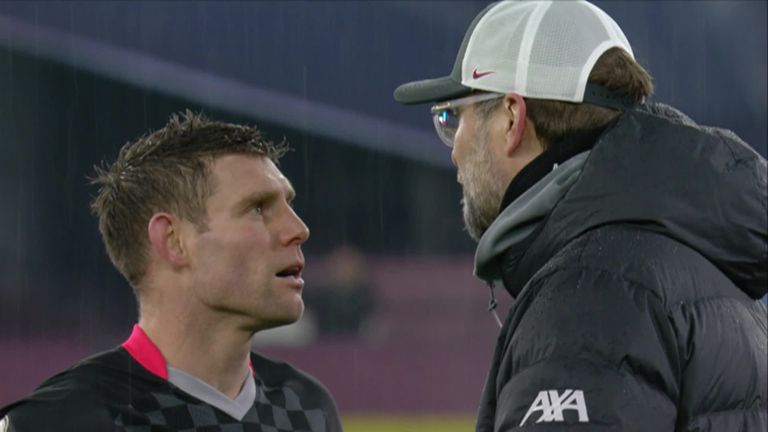