Free highlights and match report as Raul Jimenez's 58th-minute finish is enough to score all three points for Wolves over West Ham; Wolves win three in a row at home in the top flight for the first time since November 1980 FREE TO WATCH: Highlights from Wolves' match with West Ham

West Ham missed the chance to move second in the Premier League table as Raul Jimenez's 58th-minute strike secured a well-deserved 1-0 win for Wolves at Molineux.

The Hammers completed their first league double over Wolves since the 1922-23 campaign last term, but they produced a flat display in the Midlands to check their progress.

Jimenez latched onto Daniel Podence's cross to strike the decisive blow 13 minutes into the second half meaning West Ham remain in third place ahead of the weekend's remaining fixtures.

Max Kilman blazed over a good chance for a late second but one would be enough for Bruno Lage's upwardly mobile side, whose fifth win in seven games means they sit sixth in the table having lost their opening three matches.

Man of the match: Raul Jimenez.

Wolves were worthy winners as they celebrated a third straight top-flight win at home since November 1980 on an off-day for David Moyes' side.

This was the first of 13 games in all competitions in 43 days for the high-flying Hammers, who made only the fifth change to their starting line-up in the league all season owing to the serious knee injury sustained to Angelo Ogbonna in the 3-2 win over Liverpool.

This always had the makings of a compelling contest, the first managerial meeting between Lage and Moyes, and it was the visitors who had the first noteworthy opening as Aaron Cresswell's pinpoint delivery was headed wide by Jarrod Bowen after 10 minutes.

Craig Dawson replacing the injured Angelo Ogbonna in defence was the sole change to West Ham's starting line up as they took on Wolves at Molineux.

Ogbonna, who looks set to miss the rest of the season due to the anterior cruciate ligament injury he sustained in the 3-2 win over Liverpool on November 7, had posted a message on Twitter earlier on Saturday saying his surgery "went well".

There was also one adjustment to Wolves' line-up, from their 2-0 loss at Crystal Palace, with Daniel Podence coming in for the benched Francisco Trincao.

Wolves had won their previous two home league games, as many as they had in their previous nine at Molineux, and they began growing into the encounter when shouts for a penalty were turned down by referee Mike Dean.

On the half-hour mark, Hwang Hee-Chan drove into the box but after his cross struck the arm of Ben Johnson, VAR Andre Marriner upheld Dean's decision not to award a spot-kick.

The incident did spark a period of sustained pressure on the Hammers' goal, however, as moments later Jimenez strode onto Ruben Neves' excellent pass to dink an effort wide with only Lukasz Fabianski to beat.

Joao Moutinho was next to try his luck as Fabianski expertly tipped his long-range effort over before Romain Saiss was unable to direct his header inside the post from the ensuing corner.

West Ham had absorbed Wolves' best efforts and were then denied an opener against the run of play when Dean spotted an infringement by Michail Antonio on Jose Sa from Bowen's corner, which was headed into the net by Kurt Zouma only for it to be ruled out.

Lage's men had been the better of the two sides and Moyes will have demanded an improvement upon the restart but Wolves continued to dominate as Moutinho won a 50-50 ball with Rice to set up Podence for a low shot that was tipped around the post by Fabianski.

Podence was once again denied by the backpedalling Polish goalkeeper when he chipped an audacious effort towards the far post but two minutes shy of the hour mark, the hosts deservedly converted their pressure into an advantage.

It was Podence who turned creator as the forward was found in space down the right and his low cross was swept home expertly first time by Jimenez, with the Mexican finding the corner of the net beyond the reach of Fabianski.

Moyes will have been surprised at how little his side had created with Antonio's rising shot followed by an even better effort from Bowen as he escaped Saiss forming part of a belated response.

West Ham needed to show more adventure and be more daring as Lage signalled for substitute Adama Traore as an obvious outlet to help to absorb the inevitable late pressure.

But having collected six points from losing positions this term, West Ham were unable to stage a rescue act this time as their hopes of moving second in the table were extinguished. 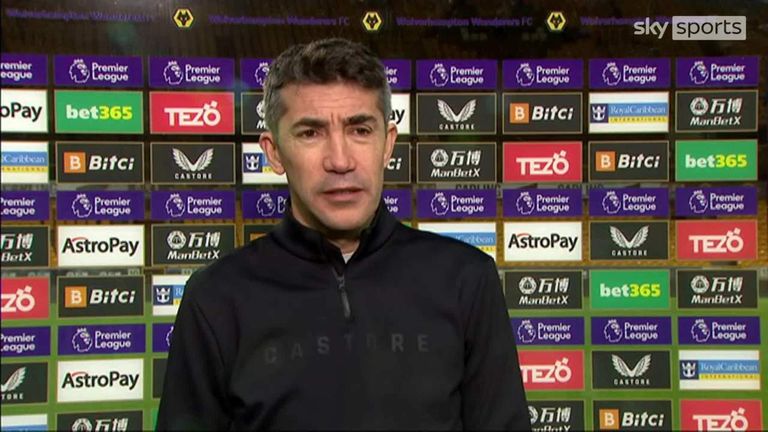 Wolves boss Bruno Lage: "I'm pleased with not just the result but the performance. I'm happy with the players but we've spoken over the past week about consistency, when you look at the game against Everton and then against Crystal Palace.

"We came back again. It was a challenge as when you play against West Ham, you've got to be good. I said to the players to play the way they've been training as especially on Thursday I went home with a good feeling that we'd come today with a good performance.

"It was another good performance in the first half. We controlled the game since the beginning. When you play against a team like West Ham, you need to be careful. All the players did everything we planned so I'm very happy. I said a few minutes before the game that what I want today is very simple - give the same feeling to the fans that you give to me. 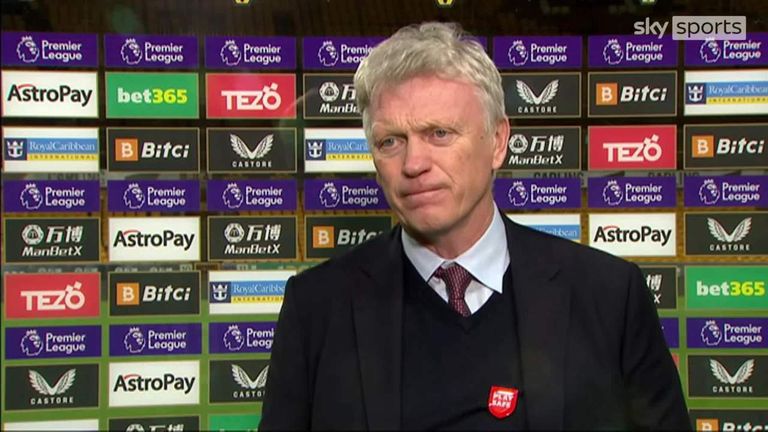 David Moyes credits Wolves for an excellent performance as his West Ham side fell to defeat.

West Ham boss David Moyes: "All Premier League games are tight and I thought Wolves played very well. They've been doing this all season. We had opportunities in the early part of the game.

"We fell short in all areas today and we didn't play as well as we have done. In some games we've been clinical but today we needed to do something special to win.

"It was a really good goal [from Jimenez] and we didn't quite get up to the ball at any part of the passage of play. There's no excuses about the international break as it's the same for every club."

"West Ham have been brilliant this season, but as we entered a third international break, the question was for how long they could sustain it.

"The Liverpool result, the Hammers' fourth successive league win, saw David Moyes' team replace the Reds in third place in the table, going three points behind leaders Chelsea. But as Moyes strode onto the pitch at the full-time whistle at Molineux, he could acknowledge that for one of the very few times this campaign, his team had deservedly been on the end of defeat.

"Declan Rice withdrew from the England squad last week because of illness and he looked well short of his best here following the praise heaped upon him by Glenn Hoddle as 'the best player in the Premier League'.

Moutinho and Neves patrolled his midfield area to lay the foundations of a third straight home league win for Wolves. West Ham have clearly bought into Moyes' methods after two years in charge, but after far less time in the dugout, Lage is showing encouraging signs of his players following the same upward trajectory.

"This is no more than a setback for West Ham, Moyes will hope, and there is the Europa League trip to Rapid Vienna on Thursday that will provide his players with an instant opportunity to respond. One of the cornerstones of Moyes' success at West Ham has been his ability to call upon a settled side with just four changes to the starting XI prior to Saturday.

"But with a raft of games coming up over the next month, this was not the perfect start to life without Ogbonna, whose season-ending injury will no doubt be addressed in the January window after the Czech businessman Daniel Kretinsky completed his purchase of a 27 per cent stake in the club this week.

"The Hammers were hoping to land a ninth straight league away game unbeaten for the first time since the 1985/86 season - when they finished third - but having suffered defeat on the road for the first time in any competition this term, this was not so much a reality check as a reminder that any drop in standard will undoubtedly get punished.

"You have to go as far back as the 1975/76 campaign for the last time West Ham started a top-flight campaign this well, but 16 games without a win meant they would eventually finish that term 18th. The wheels are not expected to come off as drastically this time around and this blip should sharpen the focus, with Manchester City next up in the league at the Etihad."

Man of the match - Raul Jimenez

Three of Raul Jimenez's last five Premier League goals for Wolves have come from outside the box, having scored each of his first 32 in the competition from inside the area.

Semedo had an exceptional game, too, creating three chances for his team but it was Jimenez who showed his resilience to overcome an earlier miss and score the winner with a sublime finish.

Having notched four goals prior to his serious head injury last term in November, Pedro Neto and Ruben Neves on five apiece ended as the club's leading goalscorers. It underlined the player's importance, and here was another indication that he is getting back to his best.

Jimenez said: "We're fighting as a team and as a family. This is how we have to keep going. We knew we were beaten in the last match, so this was a good opportunity today to bounce back.

"I had a difficult part of my life this last year. I knew from the first moment that I would be back, and I'm here. I'm enjoying what I'm doing with the team and the club. I'm really happy to be back."