Aberdeen 0-1 St Johnstone: Stevie May on target as Saints pick up their first Scottish Premiership win of the season 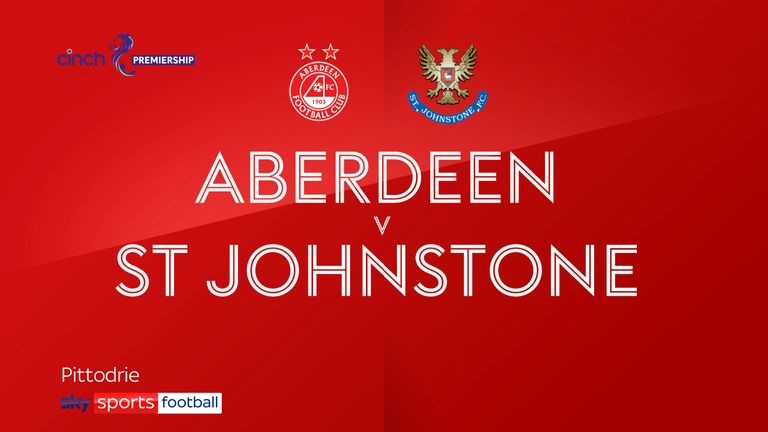 Highlights of the Scottish Premiership match between Aberdeen and St Johnstone.

St Johnstone striker Stevie May came back to haunt former side Aberdeen as he scored the only goal of the game at Pittodrie to earn the Perth side their first win of the season, while extending the Dons' winless run to seven in all competitions.

May's goal was a rare display of prowess in front of goal in a match that had seen few real sights of goal for either side.

Aberdeen handed David Bates his first start in place of Declan Gallagher, with Jay Emmanuel-Thomas and Austin Samuels also returning to the starting eleven, while Saints made four changes after their 2-1 defeat to Rangers, including a debut at the heart of defence for Efe Ambrose.

The home side threatened as early as the third minute with Emmanuel-Thomas just failing to connect with a left-wing cross, but it would be almost the half-hour mark before they threatened again, Funso Ojo finding himself under a Samuels cross.

Christian Ramirez should have done better when he rose unmarked to nod a Calvin Ramsay corner wide, while the only shot on target in the first 45 was a deflected Samuels effort straight down the throat of Zander Clark.

Aberdeen were seeing success down the left and Jack McKenzie's 53rd-minute cross should have seen Ramirez give the hosts the lead, but the sliding American was again unable to connect.

Two minutes later and another McKenzie cross found Emmanuel-Thomas at the back post, but his header was comfortably held by Clark. Another chance, this time from a Ramsay corner, saw Ross McCrorie head wide on the hour.

But the Perth side were coming into things as Aberdeen committed more men forward and a strange chance following a particularly scrappy build-up saw Joe Lewis tested for the first time, as he turned Glenn Middleton's shot wide.

The visitors had the ball in the net two minutes later as Middleton turned home Chris Kane's flick from an Ali Crawford cross, but the on-loan Rangers man was clearly offside.

But Aberdeen failed to heed the warnings and May struck after 84 minutes, benefitting from a break of the ball off a helpless Ramsay before cutting onto his right foot and sending a low 20-yard strike past Lewis and inside the near post.

Aberdeen pushed for a leveller through the five minutes of injury time and Jonny Hayes came closest with a bullet header at the back post, but they were ultimately frustrated.

Aberdeen now go to St Mirren on Sunday September 26, live on Sky Sports Football at midday, while St Johnstone are at Hibs on the same day at 3pm.