Arsenal U21 vs Chelsea U21. Papa John's Trophy Northern Group A.

Report and free match highlights of the Papa John's Trophy round three clash between Arsenal U21 and Chelsea U21 at the Emirates Stadium, as the Gunners book a spot in the quarter-finals of the competition with a 4-1 in north London 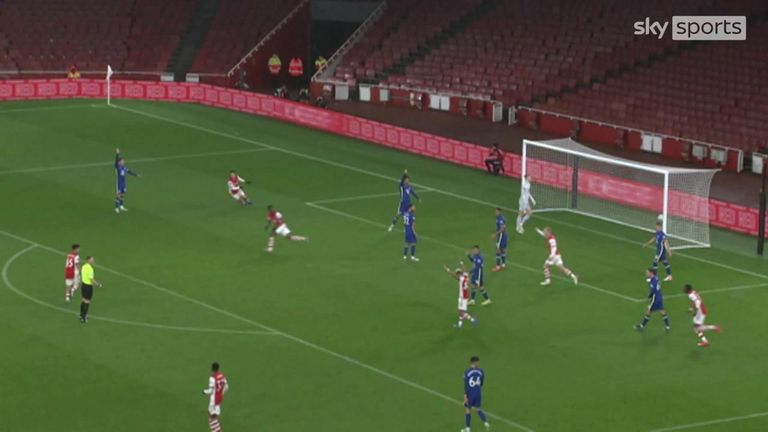 Arsenal's U21s advanced to the quarter-finals of the Papa John's Trophy on Tuesday night, after a 4-1 win over Chelsea's U21s at the Emirates Stadium.

The young Gunners - who had ousted Ipswich from the competition last month - took the lead after 10 minutes when James Olayinka's helped Joel Lopez's shot in from the edge of the box.

Chelsea's chances of gaining a foothold in the game then took a significant hit when Xavier Mbuyamba was sent off as the last man for pulling Mika Bierith to ground as he rampaged forward down the left flank.

However, they did pull level just three minutes being reduced to 10 men, when Jayden Wareham scored a superb solo effort, having seized on a mistake, run through the middle of the park and fired past home goalkeeper Karl Hein.

But three minutes before the break, former Fulham trainee Bierith restored the lead with a composed finish after controlling a cross into the box from the left.

There was no way back for the Blues after the break, either. Omari Hutchinson scored, arguably, the goal of the game when he drifted in from the right and looped a brilliant, dipping effort into the bottom left corner from 20 yards just after the hour mark

And Marcelo Flores added the gloss shortly afterwards with he smashed in a fourth after collecting a smart cut-back from the impressive Bierith.

Meanwhile, Cambridge ensured they also booked a spot in the last eight with a 2-1 win over previous winners Portsmouth at the Abbey Stadium. Harvey Knibbs hit a nine-minute double for the hosts after the break, with Michael Jacobs scoring a late consolation for Danny Cowley's men.