The tie had appeared destined to be heading for a goalless draw after the home side missed numerous promising openings at the Emirates.

However, with just four minutes left to play, substitute Pierre-Emerick Aubameyang slipped Nicolas Pepe through on goal and the Ivory Coast forward kept his cool to dink the ball past the advancing Slavia No 1 Ondrej Kolar for his fourth Europa League goal of the season.

But just as Arsenal thought they had gained a slender lead heading into next Thursday night's second leg in the Czech capital, up popped Holes to head home at the far post to burst the Gunners' bubble.

Arsenal would have known ahead of kick-off just what a tough test awaited them in what was their 16th major European quarter-final and nothing that happened in the first half would have changed their mind, with Slavia proving typically stubborn opponents.

The visitors, who eliminated both Leicester City and Rangers in the previous two knockout rounds, actually had the first effort on goal when Lukas Provod fired narrowly over the bar from the edge of the area, but were quite content to defend deep in numbers thereafter.

However, despite their opponents being largely happy to sit back and play on the counter, Arsenal struggled to create any clear-cut openings in a lacklustre first half, although Bukayo Saka should have done better when played through on goal just before the half-hour mark.

The England international, back after injury, side-footed wide of the far post with just Kolar to beat and even though the flag went up for offside, replays showed the goal would have stood had the forward found the back of the net.

Rob Holding also went close with a header which Kolar tipped over six minutes before half-time as the sides went in level at the break, only for the hosts to step up the pace in the second period in search of that crucial opener.

Within four minutes of the restart, the always-dangerous Saka was hauled down right on the edge of the area, only for Willian's resulting free-kick to beat the motionless Kolar, but not the outside of the post.

Bukayo Saka and Emile Smith Rowe returned to the Arsenal XI, with the young pair having missed out against Liverpool on Sunday. They were two of six changes – Hector Bellerin, Cedric Soares, Granit Xhaka and Willian also coming into the starting squad.

Kieran Tierney and Martin Odegaard missed out through injury, with Calum Chambers also not in the matchday squad. Dani Ceballos, Nicolas Pepe and Pierre-Emerick Aubameyang all dropped to the bench.

Slavia were not without their own moments of threat on the break, though, with Bernd Leno's outstretched leg required to keep out Jan Boril's low drive just before the hour-mark, before Alexandre Lacazette spurned the clearest opening of the night minutes later.

The visitors were actually on the attack and yet moments later Lacazette found himself racing through one on one with Kolar after Oscar Dorley lost possession on halfway, only for the France striker to curl his shot against the stanchion of post and bar, with Emile Smith Rowe unable to convert the rebound.

In what was becoming an end-to-end contest, Slavia missed their own gilt-edged opportunity when substitute Petr Sevcik somehow missed the target with just Leno to beat, with Mikel Arteta then deciding he had seen enough as the Arsenal manager introduced Aubameyang, Pepe and Gabriel Martinelli in attack.

The changes almost paid immediate dividends when Aubameyang side-footed inches past the far post after some build-up play involving Pepe and Smith Rowe, before Arsenal finally made a deserved breakthrough.

Aubameyang was involved, holding the ball up cleverly, before feeding his fellow sub and the Ivorian did the rest by bursting clear of his marker and dinking the ball past Kolar.

But just as Arsenal thought they had done enough for the win, they failed to deal with a stoppage-time corner, with the ball in from the right somehow finding its way to the unmarked Holes at the far post, with the Czech Republic right-back stooping to head past Leno.

4 - Nicolas Pepe has scored more goals (4) than any other Arsenal player in the Europa League this season. Super. #UEL pic.twitter.com/ysTBYB33wM

Arsenal boss Mikel Arteta: "I totally believe that we can go there and win the match, if not I wouldn't be sitting here.

"The mindset has to be to go there and score goals and win the game because we have to score if we want to go through. 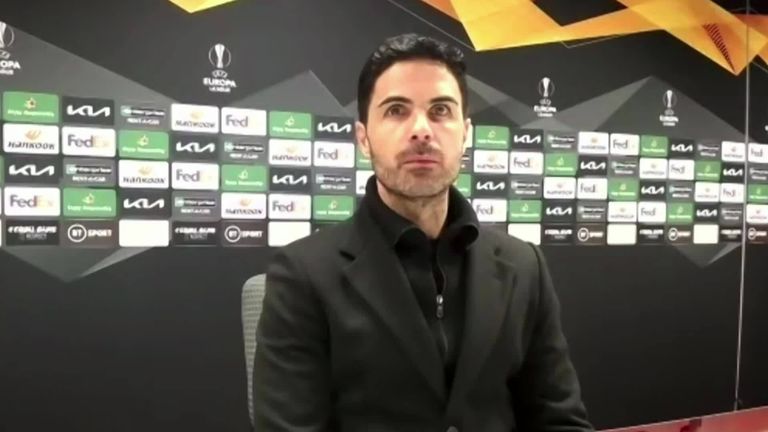 Arsenal head coach Mikel Arteta said his side didn't manage the game well enough after conceding late against Slavia Prague but believes they can still qualify for the Europa League semi-finals.

Man of the Match - Bukayo Saka

Saka returned to Arsenal's starting line-up having missed Saturday's 3-0 home defeat by Liverpool and boy were the home team glad about that given the youngster's effervescent performance in the capital.

In what was a largely uneventful first period, it was the 19-year-old that stood out with his constant forays down the right, one of which he really should have given his side the lead from.

After the break, the England international carried on being his side's most dangerous player and he almost brought about the opener with a pacy break that forced David Zima to haul him down right on the edge of the area.

Even though the forward began to tire, he still created presentable openings for Alexandre Lacazette and Thomas Partey which both players wasted before being replaced with 12 minutes to go.

Arsenal take on struggling Sheffield United at Bramall Lane on Sunday, with the game kicking off at 7pm.