By Charlotte Marsh at the Emirates 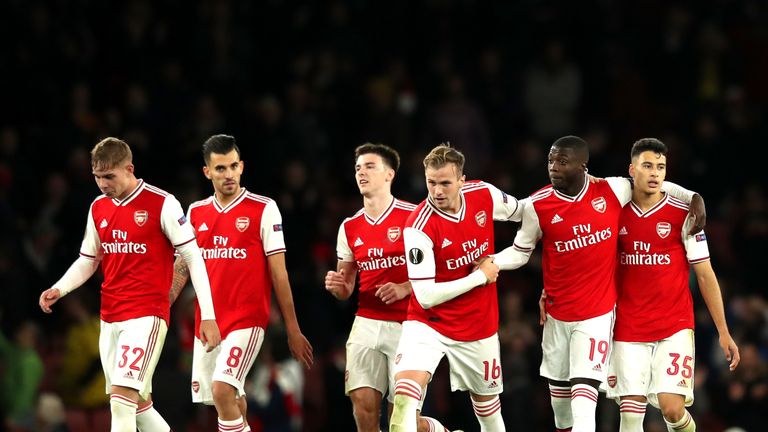 Two stunning late free-kicks from Nicolas Pepe sealed a dramatic 3-2 win for Arsenal over Vitoria in the Europa League.

With Arsenal on the verge of a second defeat in four days, Unai Emery used his last change to bring on Pepe and it turned out to be a masterstroke as the Ivorian scored two sensational free-kicks in the 80th and 92nd minute to snatch a victory.

Emery's side had struggled for long periods of the game and fell behind early when former Tottenham youth player Marcus Edwards scored inside eight minutes.

Gabriel Martinelli (32) equalised with his third Europa League goal of the campaign but Arsenal were behind again four minutes later as Bruno Duarte (36) fired home for the visitors.

But Pepe's late intervention maintains Arsenal's perfect start to the Europa League campaign as they remain three points clear at the top of Group F and while Vitoria came agonisingly close to registering their first point, they go back to Portugal empty-handed.

How Arsenal snatched an unlikely victory

Vitoria shocked the Emirates when, inside eight minutes, they took the lead. Victor Garcia made a wonderful run down the right before cutting the ball in for the waiting Edwards. He dummied Hector Bellerin and Kieran Tierney before sweeping the ball home from close range.

It took Arsenal a while to recover but began to find their feet around the half an hour mark. Bellerin got away down the flank before cutting the ball in for the waiting Martinelli, but he could not make the right contact to send it goalwards.

In the 32nd minute, Arsenal hauled themselves level. Tierney's pinpoint cross was met by Martinelli, who placed his header over the stranded Vitoria goalkeeper.

But the parity did not last long. Four minutes later, Ashley Maitland-Niles got caught in possession by Davidson who drove into the box and struck a shot off the far post, but Duarte was there to hammer the rebound home and send Vitoria into the break in front.

Unai Emery made 10 changes from the 1-0 defeat to Sheffield United - only Joe Willock kept his place. Alexandre Lacazette and Gabriel Martinelli both started after their substitute appearances at Bramall Lane with Lucas Torreira, Kieran Tierney and Shkodran Mustafi also given places in the XI. Mesut Ozil was not in the matchday squad.

The visitors could have had a man sent off in the 57th minute as Garcia put his forehead onto Alexandre Lacazette's as the two squared up following the striker's initial foul. Lacazette went down clutching his face after the contact, but with the referee in full view of the incident, only a yellow was given to the Vitoria right-back.

Arsenal struggled for creativity as the second half wore on, forcing Emery to roll the dice and bring on Pepe for Lacazette in the 74th minute and the Ivorian finally showed by he is the club's record signing. The hosts were awarded a free-kick in the 80th minute which Pepe lined up on the right. He then curled a sensational shot into the far corner to drag Arsenal back level.

That was the spark the Gunners needed and as the fourth official indicated three minutes of added time, they won another free-kick, this time in a more central area. Anticipation fizzed around the Emirates as Matteo Guendouzi and Pepe stood over it and the Ivorian produced yet again, curling his effort into the top corner.

Man of the match - Nicolas Pepe

It's unusual to give man of the match to a 74th-minute substitute but the fact of the matter is that without Pepe, Arsenal would have lost. They look devoid of ideas in attack against a well-organised Vitoria side, but they were saved by their £72m man.

Both free-kicks were of the highest quality and he has clearly been perfecting his technique on the training ground. He needed a big moment for Arsenal and this is it. Now, he needs to take that confidence and shine in the Premier League.

Arsenal manager Unai Emery: "Every new player usually needs time for adaptation. Pepe is a very good player and we believe in him totally.

"We are very happy for him and us because he has two goals and two set-pieces which are perfect. He was tired last week with set pieces and shooting on the training ground and I was expecting it when he was shooting.

"He is improving and tonight he has two goals, which are important for us and for him. He's continued his process of adaption and quickly, he is better for us.

"The second half we controlled the match better and we had good chances... I think we deserved to win, but Vitoria played well. There are more positive things than negative things and I want to take the positive things tonight for the next matches."

If we're being honest, up until now, Nicolas Pepe hasn't really shown why Arsenal spent £72m on him in the summer, a few bright moments aside. However, 19 minutes and two world-class free kicks could prove just the thing he and Arsenal need to jump start their season.

Emery noted in his post-match press conference that Pepe had been practising his free kicks in training - and he got the pay-off. Arsenal had wasted set-piece after set-piece up until Pepe lined one up in the 80th minute. From the right flank, he curled a beauty of a free kick in at the far post to equalise, with goalkeeper Miguel Silva left standing with his hands on his hips.

It was like Arsenal had two jump cables attached to their squad afterwards as they revved into high gear, with their play drawing another free kick in the final minute. The crowd were on their feet and the anticipation sizzled across the Emirates as Matteo Guendouzi and Pepe discussed tactics.

The whistle blew, Guendouzi ran in front and Pepe produced a similarly jaw-dropping finish. It was never going to be Guendouzi's to take, really - the moment was perfectly set for another Pepe masterclass.

Cue the rapturous celebrations as Arsenal finally made use of their advantages, avoiding a potential embarrassment and breaking Vitoria hearts, whose players and fans had been sensational throughout. Did Arsenal deserve to win? No, but Emery - who hailed the goals as perfect after the game - used all of his vast Europa League nous to see his team over the line.

Pepe needed a standout moment to reintroduce himself to the Arsenal fans and this was it. The question is, what next? Only Pepe can answer that and despite his standout performance, he still has a way to go to prove why his is Arsenal's club record signing.

While their Europa League campaign may be - for all intents and purposes - going well, Arsenal need to find some consistency in the Premier League and if Pepe can pick up where he left off on Thursday evening, it could be just the tonic.

Arsenal will next be in action on Sunday as they welcome Crystal Palace in the Premier League (kick-off 4.30pm). Vitoria will take on Sporting in Primeira Liga, also on Sunday (kick-off 8pm), which will be their first league game in nearly a month.

Both teams' next Europa League game will be the reverse of this one as Arsenal travel to Vitoria, but it will be on Wednesday, November 6 rather than the traditional Thursday (kick-off 3.50pm).

This is because Vitoria's nearest rivals, Braga, are also competing in the Europa League and, with the two stadiums close together, Vitoria's fixture has been moved to ease the pressure in the local area. The early kick-off is also due to broadcasting rules meaning they cannot clash with the Champions League matches on the same day.