Sadio Mane scored twice as Liverpool advanced into the Champions League quarter-finals with a 3-1 victory over a toothless Bayern Munich in the second leg of their last-16 tie.

Following a goalless draw in the first leg at Anfield, Mane put Liverpool ahead with a brilliantly-taken goal in the 26th minute at the Allianz Arena.

Bayern hit back late in the first half when Serge Gnabry's cross was deflected in by Joel Matip but Van Dijk headed in from a corner in the 69th minute and Mane scored a late third to end Bayern's hopes.

Liverpool had lost their previous four away games in the Champions League, but they produced a controlled performance to overcome Bayern, who managed only two shots on target, both in the first half.

While Jurgen Klopp's side were not at their fluent best throughout, they never looked too troubled and next turn their attentions back to their Premier League title challenge on Sunday as they face Fulham, live on Sky Sports.

After a cagey opening, in which Jordan Henderson went off with an ankle injury, Liverpool took the lead thanks to a fantastic goal from Mane.

Mane expertly controlled a long pass, swivelled around Manuel Neuer on the edge of the area and then finished with a chipped shot into the far corner.

The home fans urged Bayern to respond, but the hosts lacked a cutting edge in attack.

It was a surprise when they equalised in the 39th minute, with Gnabry getting behind Andy Robertson down the right side and putting in a cross that Matip turned into his own net.

Liverpool made two changes from their win over Burnley as James Milner and Jordan Henderson replaced Adam Lallana and Fabinho. Joshua Kimmich and Thomas Muller were both missing for Bayern, who recalled David Alaba and Franck Ribery.

Chances remained at a premium in a scrappy second half.

Neuer saved a shot from Mohamed Salah and Gnabry slid a cross through the six-yard box that was just ahead of Robert Lewandowski.

Otherwise neither team really threatened until Van Dijk rose highest at a corner and headed into the net to put Liverpool ahead again.

The goal deflated Bayern and they never looked like getting back into the tie even before Mane finished from Salah's cross in the 84th minute.

Liverpool comfortably held out in the closing stages, although Robertson was booked in injury-time and will now miss the first leg of the quarter-final. 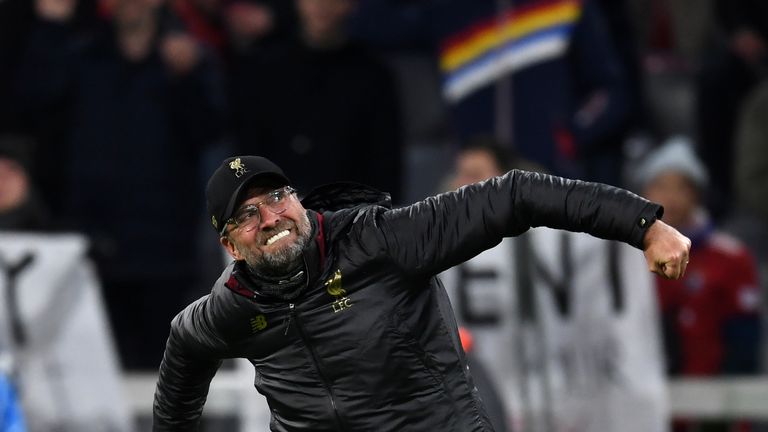 Tim Sherwood tells The Debate Liverpool can take momentum into their title challenge from their 3-1 win in Bayern Munich to seal a Champions League quarter-final spot.

With two goals in Munich, Mane has now scored more away goals in the European Cup/Champions League than any other player. His first goal to give Liverpool the advantage in the tie was superb as he controlled a long pass and finished into the far corner. He didn't get many other openings, but made sure of victory with his second goal.

Jurgen Klopp: "Scoring three here is really difficult, that's massive, and a big step for us. We will see what we can do with it, but it's a fantastic sign. I love it. We set a mark for LFC with this wonderful club that we really are back on the landscape of top international football.

"We all think that's where this club belongs and tonight we proved it at least a bit. I am really happy about the result and the fact we are through." "What did the result say? It says they want to progress - they don't want to give it up to go for the Premier League title.

"If City made a statement last night against Schalke, this was a massive statement against a side going for the title. Maybe Bayern aren't the team that they were but this was a top-class performance. Sadio Mane is in a rich vein of form. He was brilliant.

The draw for the Champions League quarter-finals takes place on Friday.