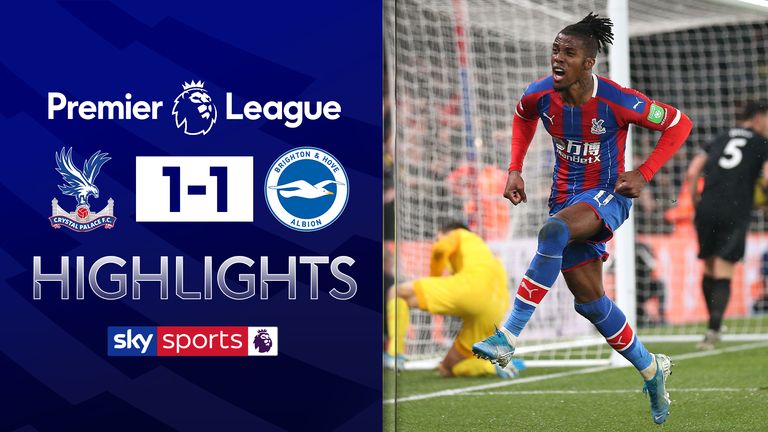 FREE TO WATCH: Highlights of Crystal Palace's draw against Brighton

Wilfried Zaha made the most of Crystal Palace's late resurgence as his fine solo effort earned them a 1-1 draw with Brighton.

The Palace talisman, so often out of form this season, was at his very best to deceive Martin Montoya, turn outside the Brighton full-back and blast a rising effort inside Mat Ryan's near post with 14 minutes to go.

Brighton had taken a deserved lead nine minutes after half-time when an equally powerful shot from Neal Maupay left Vicente Guaita helpless, but having got their noses in front the Seagulls failed to capitalise on their dominating performance.

They were made to pay for that once injury-hit Palace finally registered their first shot on target in the 70th minute with Zaha's equaliser following soon after, and with the hosts' confidence levels visibly risen they could have won it late on but saw a James Tomkins header flash wide in injury time.

Man of the match: Neal Maupay

How Palace snatched a point

The cliche is a game of two halves. This was a game of 70 minutes and 20 minutes. For the first time since their promotion back to the Premier League in 2013, Palace failed to register a shot of any kind before the break and barely improved after it, until their late resurgence.

From kick-off, Brighton controlled play and saw almost 70 per cent of the ball in the first half, and perhaps should have had a goal to show for it.

They produced a number of half-chances which stung the palms of Guaita but had a strong shout for a penalty turned down when Jairo Riedewald, making his first start in more than 18 months, appeared to clip Montoya's heels, but a VAR review decided there was no case to answer.

The break saw Riedewald withdrawn by Roy Hodgson, clearly unhappy with his side's dreadful performance, but it did nothing to stem the tide as Maupay scored the opener nine minutes after the restart, firing home from 12 yards after taking a touch on Leandro Trossard's low cross.

It was nearly two when Guaita struggled to hold onto a header from Davy Propper from a corner, but Maupay's attempt to bundle the ball home from close range was kept out by the Spanish goalkeeper.

Finally, with 20 minutes remaining, Palace notched up their first shot on target of the night as Christian Benteke's weak header was easily held by Ryan, but within moments Zaha would turn despair to joy.

Crystal Palace made four changes from their draw at Watford, including a first start for Christian Benteke since August.

There were two Brighton changes, one enforced, with Yves Bissouma in for the suspended Dale Stephens and Marvin Montoya returning for Steven Alzate.

Appearing to turn inside of Montoya, his sudden change of pace caught out the defender and gave him space to eye up his options from a tight angle on the left of the area, from where he fired high inside Ryan's near post to level the scores.

Palace suddenly found themselves in the ascendancy and could have gone in front when Kelly fired over from a similarly narrow position before Tomkins should have done better with his late header. 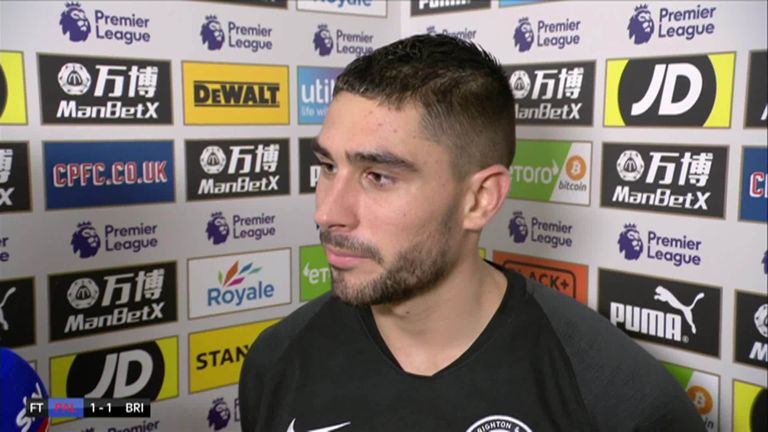 That still was not the final chance, as Maupay chanced his arm for an acrobatic winner when his bicycle kick from Montoya's cross flashed a yard wide.

A point lifts Crystal Palace above Arsenal and into ninth after Roy Hodgson's 100th game in charge, while Brighton stay 13th, but move a point ahead of Bournemouth and West Ham.

"He's come in, a lot of people thought Chris Hughton was hard done by to lose his job, they've gone with Graham Potter, and you see it a lot with teams wanting to play a certain style of football. 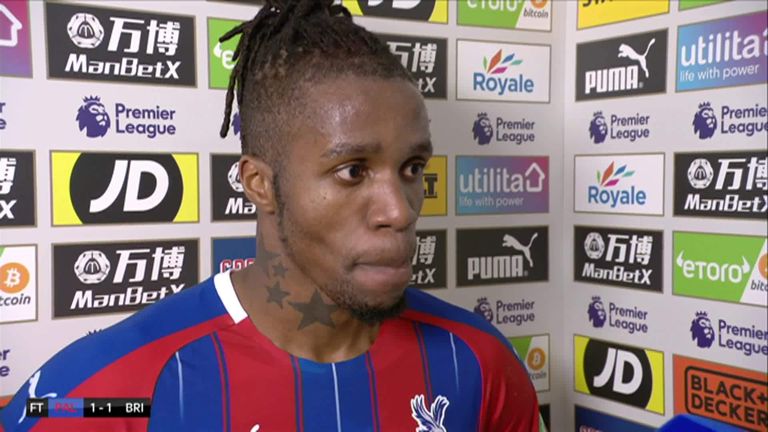 "Don't underestimate how difficult it is to get his team to play like that. It's not a case of just go forward, full-backs play high, knock it round the back - they're not losing the ball when they play it around. We've seen Arsenal this season, and criticised them for how they play out of the back. These guys aren't.

"This is a Crystal Palace team that wanted to make the same change a couple of years ago when Frank de Boer came in. The problems they had, they couldn't cope with it.

"You look at some of the Brighton players, Dunk and Duffy, one's on the bench now, but how they've adapted to that, using the goalkeeper, holding midfield player coming in, it's really impressive the job Graham Potter has done."

Roy Hodgson: "When they scored that very good goal, I feared the worst but it seemed to galvanise us and allowed us to find another lease of life. It's going to be one of those performances that live long in my memory for the attitude, determination and desire that sums up the club in the time I've been here. 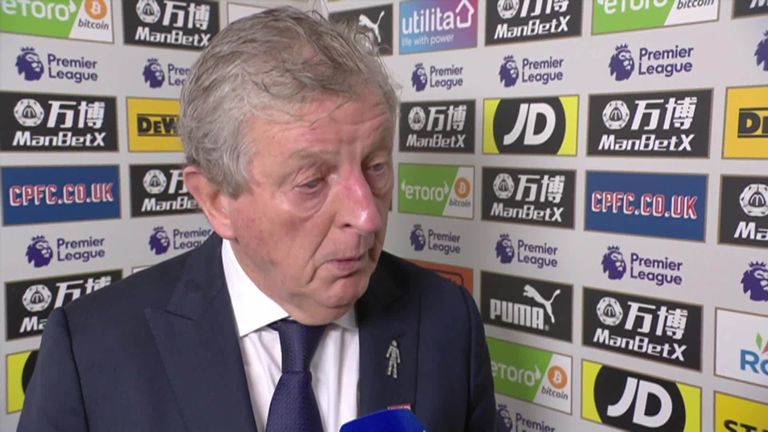 Roy Hodgson praised his Crystal Palace side for battling to a point against Brighton, despite their rivals dominating the 1-1 draw

"We're very short at the moment in the quality of players we need to help us out, and I only hope in the January transfer window we find a few payers that will give us a chance to have a somewhat calmer period in the second half of the season."

Graham Potter: "I don't think it's a missed opportunity, the performance was really really good, we were in control for all but about five or 10 minutes. 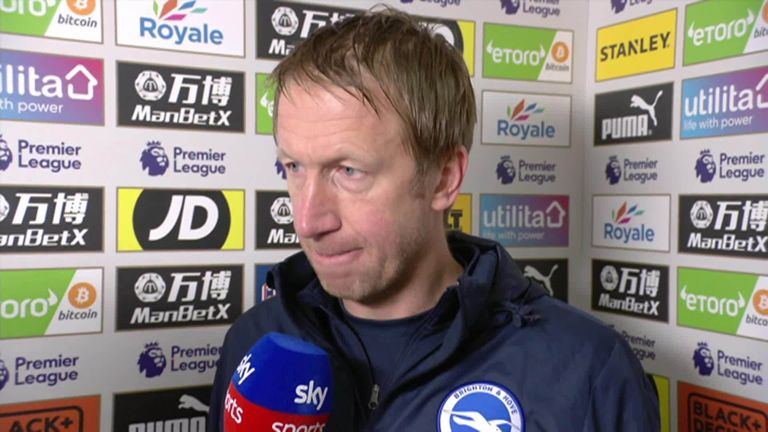 "Over the course of the game we put a lot into it, not enough to get three points but there was a lot of good stuff there."

Maupay was excellent for Brighton and continued his scoring run into a third game with a fine finish after half-time. He nearly doubled their lead from close-range soon after, showcasing his increasing confidence in front of goal and predatory instinct.

There was still time for him to show the kinds of goals he can score when he went a whisker away from a late winner with a last-minute flying kick.

Palace now go to Newcastle on Saturday in the Premier League at 3pm, while Brighton host Sheffield United at the same time in both clubs' final match before Christmas.