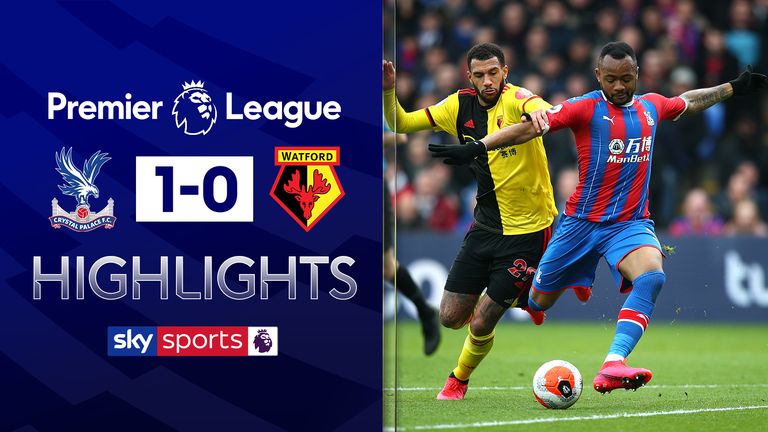 FREE TO WATCH: Highlights of Crystal Palace's win over Watford

Crystal Palace won for third game on the bounce to move into the European qualification picture by seeing off Watford 1-0 at Selhurst Park.

In a bitty and niggly encounter with eight yellow cards, including one for Wilfried Zaha who was in the thick of things not for the first time against Watford, Jordan Ayew's stunning first-half goal (28) separated the teams.

Roy Hodgson's men defended resolutely in the second period to gain a third straight clean sheet and are unbeaten in their last 20 Premier League games (W16 D4) when scoring first.

After three successive wins, Palace are up to 10th and are just four points off fifth position in the Premier League, which may yield a Champions League place this season.

For Watford, they remain in 17th, only out of the relegation zone on goal difference.

Man of the match: James McCarthy

How Palace kept on rolling

Fresh from signing a new one-year contract extension that will see him remain at the club until the end of next season, Hodgson sent his team out in their usual no-risk style.

They remain the only team in the Premier League to have not scored in the opening 15 minutes of a match this season as it was Watford that created the better early opening, with Abdoulaye Doucoure testing Vicente Guaita from a tight angle after a mazy run.

Watford remained the team seemingly carrying the greater threat but it was Palace that struck the opener on 28 minutes with their first effort on goal.

Not known for their first-half goals - this was just their third at Selhurst Park this season - Palace increased their intensity down the left and shifted the ball back to Ayew, who did not have much space on the edge of the box.

However, that did not stop him creating half a yard and firing an unstoppable effort right into the top corner, with Ben Foster having little chance to stop it.

The goal sparked some needle into proceedings with Zaha typically involved at the heart of the action. He was harshly booked just before the break for a shirt pull and Watford were then keen on testing his breaking point.

Etienne Capoue perhaps took it a little too far after the break when pushing his head into Zaha's face who responded with a petulant slap. Referee Anthony Taylor missed the incident and after a long VAR review, they decided no punishments were required.

Watford almost scored their first goal from outside the box this season when Troy Deeney let fly from 30 yards but the excellent Guaita flung himself across his goal to flick the ball over the crossbar.

Efforts from distance seemed Watford's best route to goal as Palace dealt with the visitors inventiveness - or lack of it - with relative ease as James McCarthy made life very difficult for the Watford creators with an outstanding showing.

The bookings kept on coming as the game threatened to boil over on a couple of occasions, which suited Palace who were keen on stopping Watford's flow.

Christian Benteke almost doubled the lead with an outrageous bicycle kick from a tight angle while Ayew was denied by Foster in injury time.

Man of the match - James McCarthy

Ayew pushed him close but it was McCarthy that played a huge part in the excellent defensive effort from Hodgson's men.

Sitting just in front of his back four, he broke up Watford's attacks at regular intervals, showing a tenacity that summed up the endeavour on show by this Palace team.

McCarthy made more tackles than any other Palace player (seven) and only Ayew covered more ground than him.

Crystal Palace boss Roy Hodgson: "We've had to dig in….I'm pleased with how the players stuck to their task. When it was needed to do the running, win the headers and the challenges, we did it. That kept us in the game. We're grateful once again for Ayew to score a very good winning goal.

"I have such faith and confidence in this group - I can't imagine we're going to let that go and catapult down the league and find ourselves in enormous relegation trouble." Watford boss Nigel Pearson: "The result didn't go the way we wanted it. We played pretty well. It was a missed opportunity - our inability to be decisive in front of goal. We had chances in the first half to go ahead, we rued those chances. The goal we conceded we could have done better with.

"We did enough to go away with at least a point and possibly all three. It's never an easy game coming here and our quality with the final pass was a problem. There's no point dwelling on this. I'll measure our performance on ourselves rather than what other people say. We'll bounce back. Our players are honest, they are committed to get ourselves out of the situation we're in." 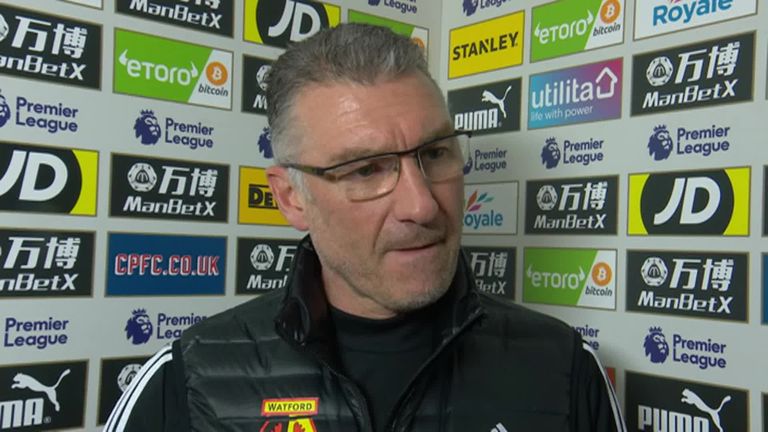 Palace take a trip to the south coast next weekend for a clash with Bournemouth (3pm kick-off) while Watford host Leicester (12.30pm kick-off) in the early game on the Saturday.