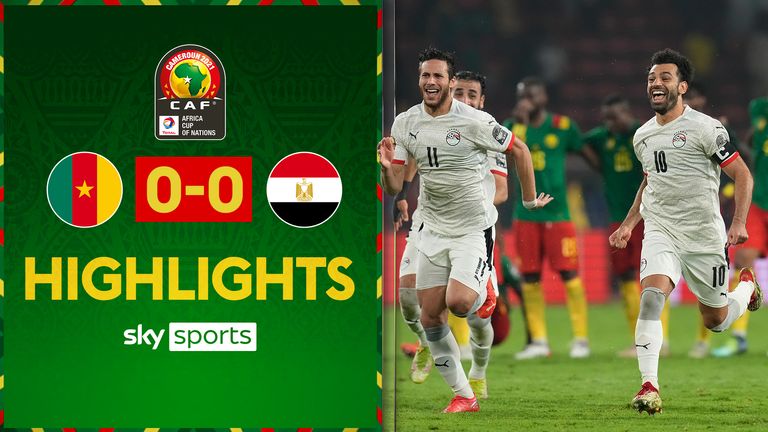 Highlights of the Africa Cup of Nations semi-final between Cameroon and Egypt.

Egypt beat tournament hosts Cameroon 3-1 on penalties after a goalless 120 minutes to set up an Africa Cup of Nations final showdown against Senegal.

Cameroon had dominated the first half - Michael Ngadeu-Ngadjui hitting the post in the pick of the chances - but let the game run away from them as Egypt took control of the tie.

However, despite a number of close efforts neither side could find the net in 120 minutes of action.

Egypt went into their second penalty shootout of AFCON 2021 - having also beaten the Ivory Coast on spot-kicks in the last 16 - without manager Carlos Queiroz, who was sent off in the 90th minute of normal time after receiving two quick yellow cards. 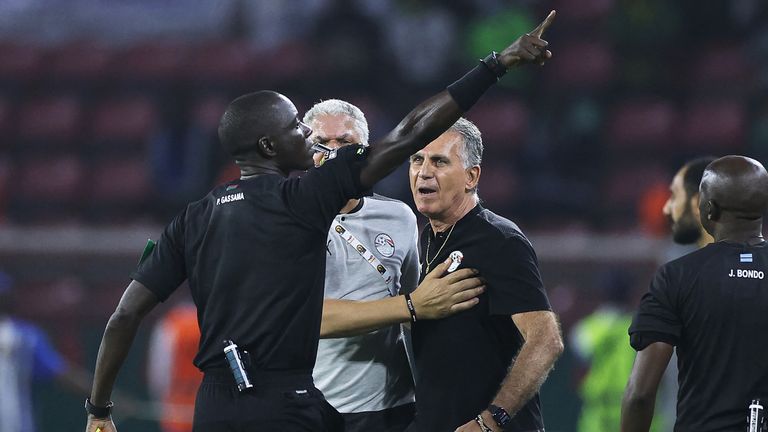 But his absence did the Pharaohs no harm as they eased through, scoring all three of their penalties. Cameroon, meanwhile, saw two of their efforts saved by Egypt goalkeeper Mohamed Abou Gabal before Clinton N'Jie sent the fourth well wide to see the hosts crash out in front of their home fans.

Cameroon will now face Burkina Faso in the third-place play-off on Saturday, before Egypt face Senegal in Sunday's final as Liverpool duo Mohamed Salah and Sadio Mane go head to head. Both games will be shown live on Sky Sports with kick-off at 7pm on their respective days.

How Egypt made it to another AFCON final

Football returned to the Olembe Stadium for the first time since a deadly crush killed eight people on January 24, seeing the quarter-final ties due to be played at the stadium moved to another location.

Cameroon dominated the first half, but it was Salah who had the first shot of the game. He was set up by Mostafa Marmoush, but his effort just curled wide of the far post.

But Cameroon saw the best chances of the half and Ngadeu-Ngadjui had two glorious chances in quick succession. Moumi Ngamaleu delivered a pinpoint corner, but the defender nodded it onto the crossbar. Both he and Vincent Aboubakar both went for the rebound, but it was poked wide. 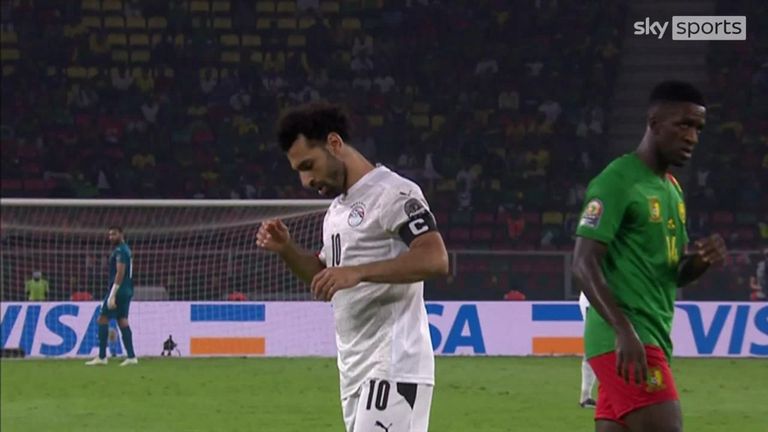 Ngadeu-Ngadjui almost scored from the second corner too, but was not able to direct Andre-Frank Anguissa's flick on goalwards. Abou Gabal - who was an injury doubt before the game - was called into two vital saves. The first saw him punch Anguissa's cross away ahead of Vincent Aboubakar, before Karl Toko Ekambi's effort was an easy collection for the goalkeeper.

Egypt manager Queiroz introduced Trezeguet at half-time, just as he had done against Morocco in the quarter-final, and the Aston Villa midfielder won a free-kick almost immediately. Mohamed nodded goalwards, but it went straight at Andre Onana. 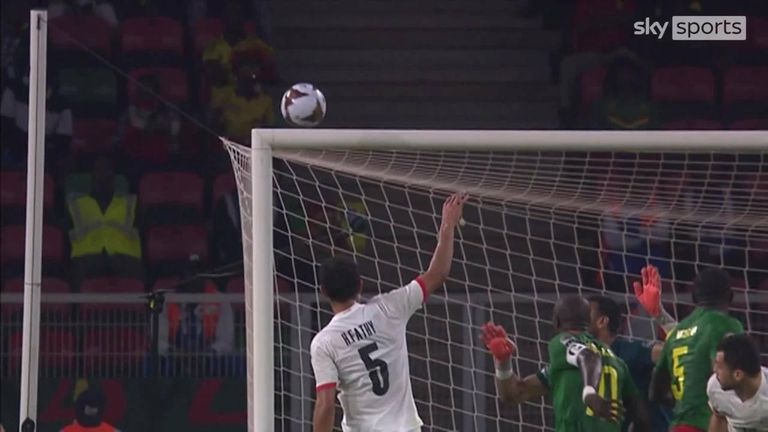 The Cameroon goalkeeper was needed once again to keep Salah from slotting into an open goal. Martin Hongla's poor pass went straight into Salah's path, who was well ahead of his defender. However, Onana raced out to meet him and as Salah attempted to send the ball around the goalkeeper, the Cameroonian's sliding challenge saw it away for a throw-in.

The tournament hosts had their chances too, with the second half becoming slower as the match wore on. Ekambi flicked on a free kick at the near post, but Abou Gabal was just behind to scoop up the ball. Then, Samuel Gouet tried his luck with a thunderous effort in midfield, but it just went wide.

The normal period ended in quite stunning fashion with Queiroz sent off. He has been badgering the officials since early on in the game, but was shown his first yellow card in the 87th minute.

But less than three minutes later, the red card followed and an animated Queiroz was forced to make his way back to the dressing room, missing the remainder of the game. In the final minute of normal time, Queiroz's assistant also received a booking. 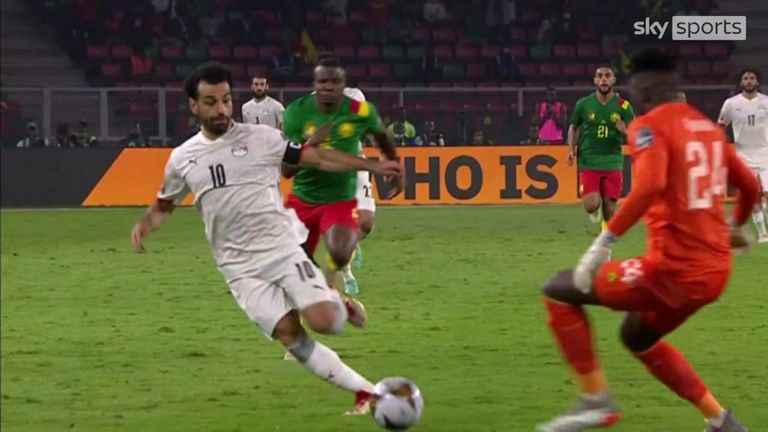 Mohamed Salah attempted to round Andre Onana, but the keeper got the better of the forward

Egypt also saw the best chances in extra time, even without their manager. Salah sent a strike wide from the top of the area, before a neat move saw Mohamed try to find Trezeguet at the back post. Harold Moukoudi was there to clear, but the offside flag was also raised. In one of the last actions of the 30 minutes, Ramadan Sobhi sent an inviting ball through the six-yard box, but none of the three other Egypt players stretching for it could turn home.

Egypt had already been preparing for penalties just before - replacing a distraught Mohamed Sherif with Zizo after the striker had only been on the field for 13 minutes - but the change paid off when the latter scored the Pharaohs' first penalty. 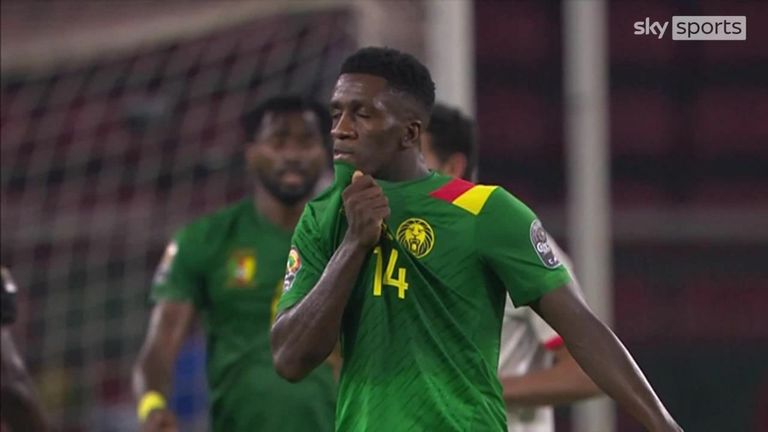 Aboubakar had sent Cameroon ahead when he scored the opening spot-kick of the shootout, but it proved to be the only penalty the hosts would net. Moukoudi and James Lea Siliki both had their efforts saved by Abou Gabal, before N'Jie lashed his penalty wide to send Egypt into Sunday's final.

Egypt will face Senegal in the Africa Cup of Nations final on Sunday's final at 7pm, live on Sky Sports. Meanwhile, Cameroon will face Burkina Faso in Saturday's third-place play-off, which kicks off at 4pm.