Report and free match highlights from the Sky Bet Championship clash between Cardiff City and Hull City at the Cardiff City Stadium as Regan Slater scored a quickfire late double to earn victory for the Tigers. 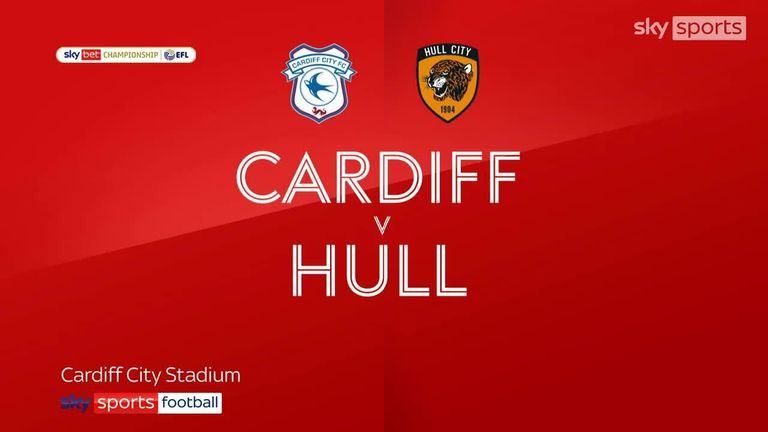 Highlights of the Sky Bet Championship match between Cardiff City and Hull City.

Two goals in as many second-half minutes from Regan Slater earned Liam Rosenior his first win as Hull boss as his side came from behind to win 3-2 at Cardiff City Stadium.

Having taken the lead with a fourth-minute goal from Dimitrios Pelkas, Hull were 1-0 ahead at the break.

The home fans booed their side off the field at half-time, but had something to cheer soon after as they levelled through Callum Robinson and then took the lead in the 62nd minute courtesy of Gavin Whyte.

However, Slater struck twice in quick succession to move Hull level with Cardiff, four points above the Championship relegation zone.

Hull got off to a flying start as they took the lead after only four minutes.

Sheyi Ojo lost the ball, and failed to win a free-kick, 30 yards out to surrender possession. Six passes later the Tigers had created enough space on the left for skipper Jacob Greaves to whip in a cross that went past Ryan Longman at the near post, but was a gift for Pelkas to tap in from the edge of the six-yard box.

The visitors continued to boss the game with their patient build-ups from the back and the only reply from Cardiff came in the form of a shot from outside the area by skipper Joe Ralls.

The left hand of home goalkeeper Ryan Allsop saved his side as he made a fingertip stop from a fierce shot from outside the area by Greg Docherty five minutes later and the Hull assault on the Cardiff goal continued.

A Cyrus Christie cross from the right provided Longman with a simple header on the edge of the six-yard box that he somehow managed to steer wide instead of score.

That was a huge let-off for the home side who were too often guilty of losing the ball and chasing shadows for much of the first half.

Cardiff left the field at half-time one goal down and with the boos from their fans ringing in their ears.

If there had been little to cheer in the opening 45 minutes, it did not take long for the Cardiff fans to wake up after the break as Robinson levelled things up 90 seconds after the re-start.

Hull goalkeeper Nathan Baxter played with fire in front of his own goal and his third short pass to a team-mate put Jean-Michael Seri in trouble as he ran back towards the penalty spot to try to lay it off to a defender. Ralls stepped in, the ball fell to Robinson and he had the simple task of stroking the ball into an empty net.

Robinson, returning to action after serving a three-match ban for his red card in the south Wales derby, then turned provider with a cross that Whyte headed home.

Cardiff were on top at that stage, but Slater completely transformed the game when he held off Ralls on the edge of the area to fire home a low shot into the left corner of Allsop's net.

Two minutes later he was involved in the build-up to a raid down the left flank that ended with him side-footing home the winner in the 77th minute.

Cardiff's interim boss Mark Hudson: "That's not how we wanted to see today go. I had a good conversation with the owner [about taking charge until the end of the season] and there are just a few pieces to put together over the next few days. We are ambitious as a club, as players and coaches and the owner has got a plan for the future that shows his support.

"We have had good consistency of performances up until tonight, which was a bit disjointed. We didn't play well in the first half and we were a bit naive in certain moments. We asked for a reaction in the second half and we got that and went 2-1 up. Then we made two mistakes and they scored again."

Hull's Liam Rosenior: "After only three training sessions the first half was outstanding in terms of the control, the dominance and the chances we created. We are going to make mistakes playing this way, but what pleased me most was the fact that having fallen behind after being in control of the game we came back and scored two outstanding goals from young Regan.

"The first two training sessions was about our defensive shape and about being organised for a difficult game at Millwall. We had a 15-minute walk through on positions yesterday and I showed them a video last night. All credit to them. They have shown me they believe in the style and are willing to be brave. They also showed great determination in coming back after going 2-1 down. I thought we were by far the better team and I'm proud they were able to come back and re-assert their dominance."